Folks, what on earth is going on in the U.S. economy? Almost 2 months ago I warned that the U.S. is heading for a growth hick-up (http://trueeconomics.blogspot.ie/2015/04/4415-another-sign-of-us-growth-slowdown.html). Now, the data is pouring in.

1Q 2015 GDP growth came in at a revised -0.7%. And that's ugly. So ugly, White House had to issue a statement, basically saying 'damn foreigners stopped buying our stuff and weather was cold' for an excuse: https://m.whitehouse.gov/blog/2015/05/29/second-estimate-gdp-first-quarter-2015. Rest is fine, apparently, though U.S. consumers seem to be indifferent to Obamanomics charms and U.S. investors (in real stuff, not financial markets) are indifferent to the charms of ZIRP.

For the gas, the WH added that "The President is committed to further strengthening these positive trends by opening our exports to new markets with new high-standards free trade agreements that create opportunities for the middle class, expanding investments in infrastructure, and ensuring the sequester does not return in the next fiscal year as outlined in thePresident’s FY2016 Budget." Now, be fearful… 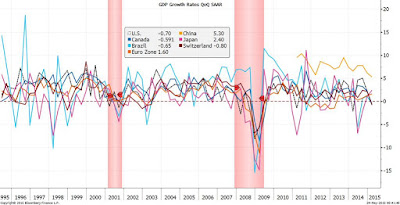 Truth is, this is the third at- or sub-zero quarterly reading in GDP growth over the current 'expansion cycle' - which is bad. Bad enough not to have happened since the 1950s and bad enough to push down 4 out of 6 key national accounts lines: 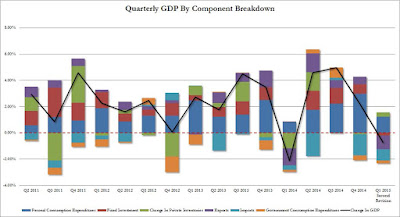 Un-phased by the White House exhortations, the Institute for Supply Management-Chicago Inc.’s business barometer fell to 46.2 in May from 52.3 in April. Readings lower than 50 indicate contraction. Per Bloomberg: "The median forecast of 45 economists surveyed by Bloomberg called for the measure to rise to 53, with estimates ranging from 51 to 55. The report showed factory employment contracted this month."

Yep, that is a swing of massive 6.8 points on expectations. 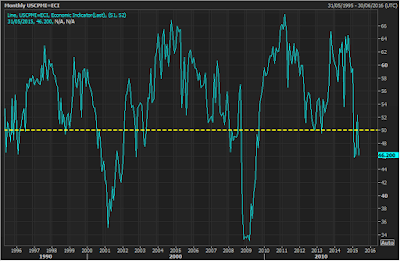 
Worse news, for the overheating markets that is, "Profits from current production (corporate profits with inventory valuation adjustment (IVA) and capital consumption adjustment (CCAdj)) decreased $125.5 billion in the first quarter, compared with a decrease of $30.4 billion in the fourth. …Profits of domestic non-financial corporations decreased $100.4 billion, in contrast to an increase of $18.1 billion. The rest-of-the-world component of profits decreased $22.4 billion, compared with a decrease of $36.1 billion." 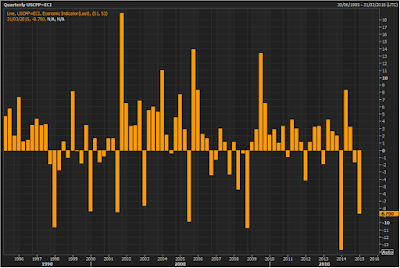 Gazing into the future, the doom is getting doomed. 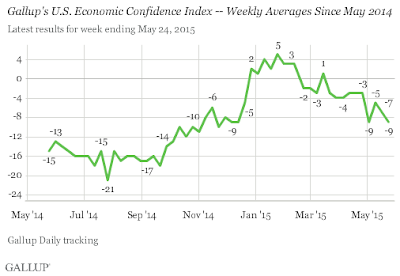 The above is via http://www.gallup.com/poll/183407/no-improvement-economic-confidence-index.aspx. The economic confidence index fell two points from the previous weekly score, Economic outlook component at -11, and Current conditions score of -6 higher than outlook. The index has been in negative territory for all but one of the past 14 weekly readings. 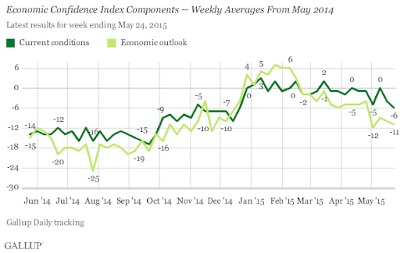 Yes, the engine of global growth is spewing oil and smoke like the old 'Fix it up, Tony' Fiat... and the White House is just not having any new ideas on sorting it out. 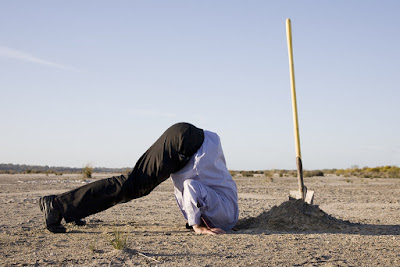