"Private Debt Overhang and the Government Spending Multiplier: Evidence for the United States" by Marco Bernardini, Gert Peersman (March 31, 2015, CESifo Working Paper Series No. 5284) uses "state-dependent local projection methods and historical U.S. data" to show  that government spending multipliers are "considerably larger in periods of private debt overhang."
In low-debt state: there is a "significant crowding-out of personal consumption and investment" in response to fiscal spending stimulus, "resulting in multipliers that are significantly below one."
However, "conversely, in periods of private debt overhang, there is a strong crowding-in effect, while multipliers are much larger than one. In high-debt states, more (less) government purchases also reduce (increase) the government debt-to-GDP ratio."
These results are robust to controls for the business cycle, government debt overhang and the zero lower bound on the nominal interest rate. Which lead authors to a conclusion that fiscal "spending multipliers were likely much larger than average during the Great Recession."
As a note of caution, the authors posit that "it is not clear what the exact reason is for the different behavior of the private sector in periods of debt overhang. Can it be explained by borrowing constraints or rule-of-thumb behavior of households?.. Is it driven by a much higher marginal propensity to consume of highly-leveraged households?.. Or are there alternative explanations?"
To add to this list, one needs to consider the sovereign capacity to actually undertake fiscal stimulus. In the current crisis, for many states (unlike the U.S.) room for stimulus is severely curtailed by already present public debt overhang. In addition, one has to be careful translating the U.S. results to other, smaller and more open economies, such as euro area states. Finally, the findings need confirmation in a setting with fixed exchange rates.
"Another relevant extension of our analysis is the question whether also tax multipliers are different across private debt states. Our findings also have some relevant policy implications. In particular, the state of private debt seems to be an important indicator for the consequences of fiscal consolidations and stimulus programs. In periods of debt overhang and deleveraging in the private sector, it is probably not a good idea to conduct austerity policies, because it could have dramatic effects on economic activity. In contrast, deficit-financed government purchases policies could significantly stimulate and stabilize the economy in periods when households are deleveraging and depressing aggregate demand. On the other hand, once private debt levels are again below trend, the timing is perfect to conduct fiscal consolidations, having little consequences for economic activity." 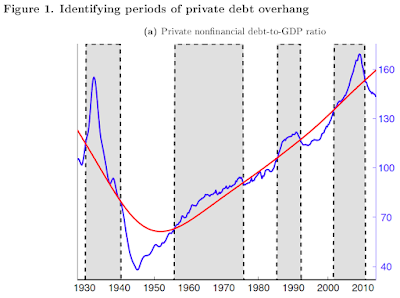 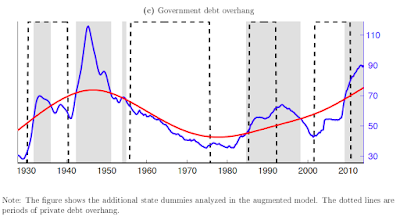 Fascinatingly, this evidence lends credence to the latest theory of financial imbalances, known as the "excess financial elasticity" theory, formulated by Borio: https://www.bis.org/publ/work456.pdf on which I have just submitted an article to a U.S. publication (stay tuned for the unedited version to be posted here later next month). I covered Borio's research recently here: http://trueeconomics.blogspot.ie/2015/05/8515-bis-on-build-up-of-financial.html