Euromoney is covering sovereign default risks in Latin America in the wake of COVID19, with a comment from myself: https://www.euromoney.com/article/b1320n1grh638l/argentinas-crisis-threatens-brazils-faltering-economy. 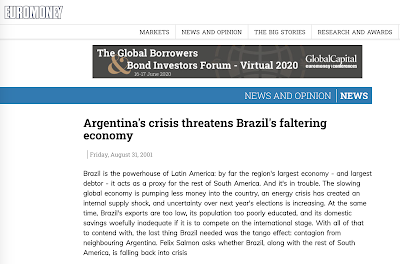 So, we have this: 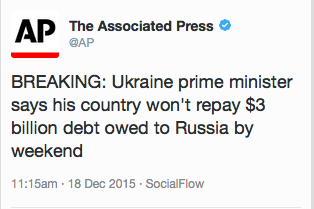 Which means that Ukraine and Russia - so far - have failed to agree terms of debt restructuring. As a reminder, over the last few days, Ukraine and Russia were involved in a 'last minute' dialogue (via Germany) to resolve the issue.

Does this mean that Ukraine is now in a sovereign debt default? Technically - no. Ukraine will only be in a default after 10 days grace period expires, which means the parties to the talks still have 12 days to reach an agreement and avoid default.

Does this mean that Ukraine is now in breach of IMF lending criteria? Technically - no. IMF amended its own rules allowing lending to continue for countries in official sector default, as long as these countries continue to engage in debt restructuring negotiations with the lenders.

Can the two countries reach a deal in time to avoid official default? Unlikely: any deal between Russia and Ukraine (except for a deal that treats Russia under the same terms extended to private lenders - a deal that is simply unacceptable to Russia) will require approval of other (commercial) lenders under the agreement between commercial lenders and Ukraine struck earlier. There is simply not enough time to achieve such an approval, even assuming, there is a deal and the deal can be approved (both assumptions are quite a stretch).

Do both parties show will to negotiate in good faith? So far - no. Russian offer (see here) has been to restructure debt by extending repayment period (a real haircut absent nominal haircut, as far as I read this). The offer shifted Russian position in negotiations in the direction of Ukraine's position: from the opening position that the debt is official sector debt and thus should be repaid in full and in time. Ukraine's position has been to treat Russian debt equivalent to private sector debt and Ukraine (as far as public record goes) did not alter its position to move closer to Russian offer. Ukraine also deployed consistent rhetoric of "Our way or the highway" variety. In other words (I am willing to be corrected on this), Russia made insufficient step toward Ukraine, while Ukraine made no step toward Russian position whatsoever.

Note: my view has been (consistently over time) that Russia should restructure loans to Ukraine to a longer term, say 10-year, bond extended at original interest rate and allow for 2-3 years interest payments moratorium. Financially optimal solution would have been to impose a haircut on principal and extend maturity of the remaining balance. But, given Ukraine's failure to secure stronger restructuring with private sector lenders, this option is not available and is politically infeasible.

An interesting and far-reaching article on Ukraine's attempts to restructure some of its debts via Bloomberg: http://www.bloomberg.com/news/articles/2015-05-29/ukraine-creditors-said-to-offer-coupon-cuts-10-year-extension-ia9ao4ey 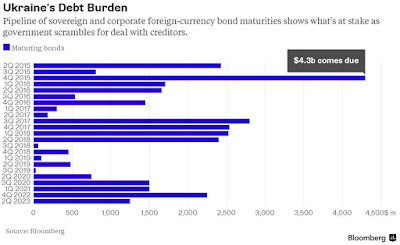 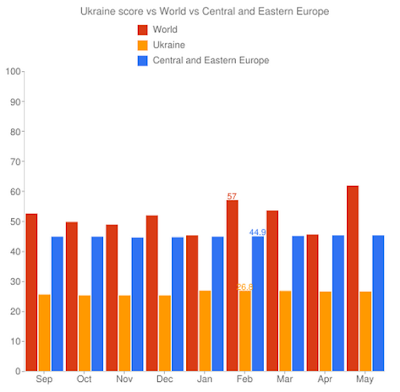 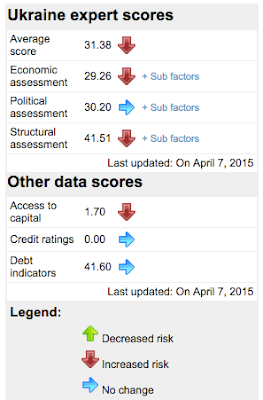 Ukraine score is 26.30 which ranks the country 147th in the world in creditworthiness.