Per latest report from the Economy Ministry, Russian GDP contracted 0.3% m/m in November in real terms and is down 3.7% y/y over 11 months through November 2015. Compared to 12 months ago, November GDP was down 4%.

This implies that, the economy will likely be down 3.8 percent (by my estimates: 3.8-3.9 percent) in 2015 as a whole. More significantly, with November GDP being down on foot of weaker oil prices and with crude prices continuing to contract through December, we are now less likely to see stabilisation in the economy (zero growth or return to positive growth) in 1Q 2016.

Meanwhile, in November, real wages were down 10% y/y while retail sales were down 13% for eleventh month in a row, according to Rosstat.

Rosstat data shows that over the last 12 months through November, food sales were down more than 11% and non-food goods sales fell nearly 15%. The figures for November 2015 show sharper contraction, in part because in November 2014 retail sales in Russia actually rose on foot of rapid devaluation of the Ruble. But overall, private consumption in Russia continues to run at a level consistent with where it was back in 2011. As noted recently by BOFIT, private consumption in Russia is still some 10 percent above where it was pre-crisis in 2008. Which is no mean feat, as for example, in the case of Ireland private consumption currently remains below its pre crisis levels despite the fact that Irish economy has been recovering very robustly from the crisis in recent years.

All of this supports negative view of the Russian economy going into 2016, summarised in my earlier post here: http://trueeconomics.blogspot.ie/2015/12/281215-bofit-summary-of-2016-outlook.html

The outrun so far has been quite disappointing for the forecasting hawks, including for example Danske Bank analysts who at the end of May 2015 predicted Russian economy will shrink 7.9% y/y in 2015 ( forecast they revised to -6.2% at the end of August 2015). 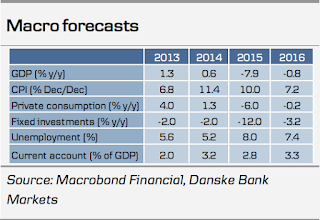 Or for that matter for seasoned hawks, like Andres Aslund who in January prediction put the matters thus: “Russia’s GDP is likely to plunge in 2015. Indeed, it would be prudent to expect a slump on the order of 10 percent. In many ways, Russia’s financial situation is eerily similar to the fall of 2008, when then-Prime Minister Vladimir Putin called his country a safe haven in the global financial crisis. In 2009, Russia’s GDP dropped by 7.8 percent. In other ways, the situation seems even worse.” (H/T to @27khv for the link: http://www.the-american-interest.com/2015/01/15/russias-output-will-slump-sharply-in-2015/).

But the outrun is also a bit on a reality check to some Russian political and Government figures (including President Putin and Prime Minister Medvedev) who bought into the fragile and dynamically uncertain improvements over Summer 2015 to announce the bottoming out of the economic crisis.

Truth is, Russian economy is a very hard nut to crack for any forecaster, as it is currently subject to a series of coincident shocks that themselves are hard to price and predict: oil prices and gas prices slump, contracting demand for energy globally, including on foot of both geopolitical changes and warm weather; broader commodities prices collapse, including on foot of global demand weaknesses and regional (e.g. China) weaknesses; geopolitical risks and sanctions (including financial sanctions); ongoing deleveraging of the Russian banking sector (including outside Russia, especially in Ukraine and the rest of the Former USSR and in parts of Central and Eastern Europe); domestic structural weaknesses (including those that started manifesting themselves in late 2011 and continue to play weak economic hand to-date); and so on. Thus, we shall be kind to forecasters and politicians making bets on Russian economy’s direction.

But translating these indicators into actual growth performance is a perilous task... as the November figures showed.

As BOFIT reports this week: Russian domestic demand shrunk at an accelerating rate in April with retail sales down 10% y/y after contracting 7.5% in 1Q 2015. Investment was down 5% in April, following 4% drop in 1Q 2015. Investment fall would have been even sharper if not for a massive +30% rise in volume of new housing completions (most likely a temporary rush to complete stock of unfinished housing int espouse to higher cost of carry).

Latest estimates from the Economy Ministry put Russian GDP at -4% in April, deeper than 1.9% contraction recorded in 1Q 2015. 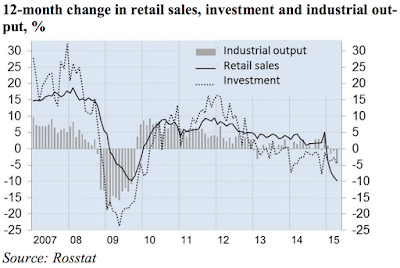