Latest Central Bank of Russia data shown decline in private forex outflows in 1Q 2015 as migrants and Russian citizens cut back on transfers abroad. In 1Q 2015, based on CBR data, private money transfers from Russia were down to USD2.1 billion - the lowest level of transfers since 1Q 2010 and down on USD3.9 billion in 1Q 2014 and USD4.3 billion in 4Q 2014. The data covers only cash transfer (wire transfers) and does not include bank transfers. Still, the number is significant for two reasons: 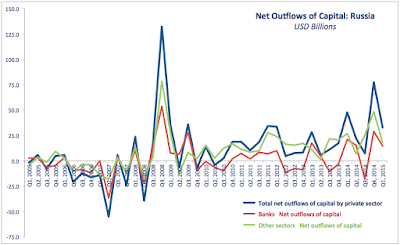 Key drivers for slower rate of capital and forex outflows are:

Another factor responsible for improved outflows is change in the migration laws. Prior to January 1, 2015, citizens from countries with visa-free entry to Russia were allowed to remain in Russia for 90 days and could re-enter any time after exiting the country. From January 1, the new rules require them to stay maximum 90 days and after exiting the country, remain outside Russia for 90 days before re-entering. It is worth noting that this is identical to similar rules applying to visa holders in many Western countries. As the result, based on Federal Migration Service data, inflow of migrants into Russia fell 70%. One outcome of this is that unemployment levels in Kyrgyzstan, Tajikistan and Uzbekistan - three key net senders of migrants to Russia - jumped, while remittances from Russia to Uzbekistan fell 16% in 2014, and to Tajikistan  by 8%. Third largest net sender of migrants to Russia was Ukraine, with remittance to Ukraine down 27% y/y in 2014.