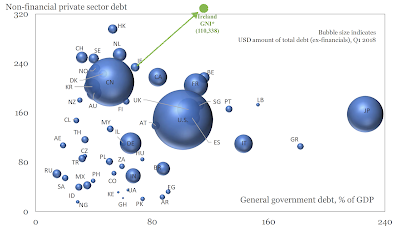 Yep, it is unflattering... albeit imperfect (there is some over-estimate here on the corporate debt side).

CSO have released the latest (3Q 2019) data for the National Accounts. The headlines are covered in the release here: https://www.cso.ie/en/releasesandpublications/er/na/quarterlynationalaccountsquarter32019/ and are worth checking. There was a massive q/q increase in GNP (+8.9%) and a strong rise in GDP (+1.7%).

Official value added q/q growth figures were quite impressive too:

On the expenditure side of accounts:
Not exactly the gap we want to see, especially during the expansionary cycle, but public consumption has been running below private consumption in level terms ever since the onset of the recovery.
With this in mind, here is what is not discussed in-depth in the CSO release. CSO reports a measure of economic activity that attempts to strip out some (but not all) of the more egregious effects of the tax optimising multinational enterprises' on our national accounts. The official name for it is 'Modified Domestic Demand', "an indicator of domestic demand that excludes the impact of trade in aircraft by aircraft leasing companies and trade in R&D service imports of intellectual property". Alas, the figures do include intangibles inflows, especially IP on-shoring, income from domiciled intangible assets, and transfer pricing activities. Appreciating CSO's difficulties, it is virtually impossible to make a judgement as to what of these three components is real (in so far as it may be actually physically material to Irish enterprises and MNCs trading from here) and what relates to pure tax optimisation.
With liberty not permitted to CSO, let's take the two categories out of the aggregate modified demand figures. 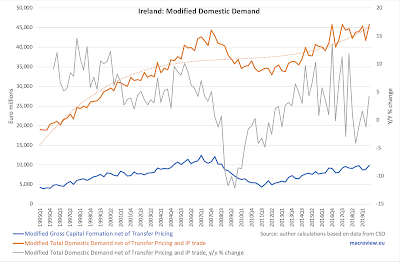 So, this good news first: Modified Total Domestic Demand is growing and this growth (y/y) is improving since hitting the recovery period low in 3Q 2018.
Bad news: growth in modified domestic demand remains extremely volatile - a feature of the Irish economy since mid-2014 when the first big splashes of the Leprechaun Economics started manifesting themselves (also see last chart below).
Not great news, again, is that domestic growth is not associated with increases in investment (first chart above, blue line).
More good news: in levels terms, adjusting for inflation, Ireland's Modified Domestic Demand has been running well-above pre-crisis period peak average levels for quite some time (chart below). Even better news, it appears that much of the recent support for growth in demand has been genuinely domestic. 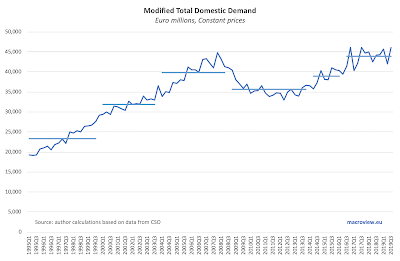 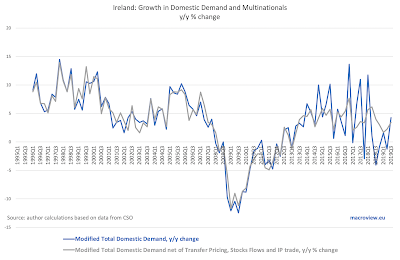 Starting with mid-2014, there is a massive variation in growth rates between the domestic economy growth rates as reported by the CSO and the same, adjusting for MNCs-dominated IP and transfer pricing flows, as well as one-off effects of changes in stocks (inventories). There is also tremendous volatility in the MNCs-led activities overall. Historically, standard deviation in the y/y growth rates in official modified domestic demand is 5.68, and for the period from 3Q 2014 this is running at 5.09. For modified demand ex-transfer pricing, IP and stocks flows, the same numbers are 6.12 and 1.62.
Overall, growth data for Ireland has been quite misleading in terms of capturing the actual tangible activities on the ground in prior years. But since mid-2014, we have entered an entirely new dimension of accounting shenanigans by the multinationals. Much of this is driven by two factors:
Time will tell if these changes will lead to more or less actual growth in the real economy, but it is notable that the likes of the IMF have recently focused their efforts at detecting tax optimising activities at national levels away from income flows (OECD approach to tax reforms) to FDI stocks and firm-level capital activities. By these (IMF's) metrics, Ireland has now been formally identified as a corporate tax haven. How soon before the OECD notices?..
Yes, we all know, Irish GDP in 2015 grew by an officially idiotic 26%. And yes, I am no longer gracing these illusionary / delusionary numbers with an attempt at any serious analysis. Doing so would be too big of an intellectual subsidy to the world of Irish officialdom. So here are two quite opposite (in their top-line accuracy) views of the same problem, that both, in the end, arrive at the same conclusion:

One view is from Fortune magazine http://fortune.com/2016/07/13/ireland-tax-haven-gdp-up/ where the headline says all you need to know 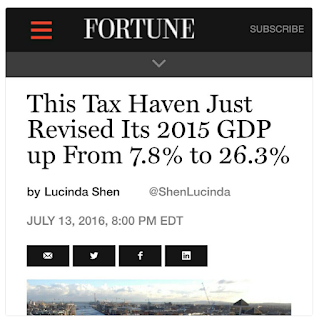 And another is from the Irish Times, that rows in with a more 'diplomatic' (aka - easier to chew by the Dons of the Irish Civil Service) discourse that is worth reading, despite it containing some pretty delusional (see my twitter stream from today on this) statements: http://www.irishtimes.com/business/economy/ireland-s-gdp-figures-why-26-economic-growth-is-a-problem-1.2722170#.V4i7kuyVTic.twitter.

In the nutshell, Fortune got it right at the top level, Irish Times got some beefier discussion of the details.

In the previous 6 posts, I covered:


So let’s get down to the last post on the matter of Irish National Accounts for 3Q 2015: the subject of Irish economy’s dependency on MNCs… err… exports that is. 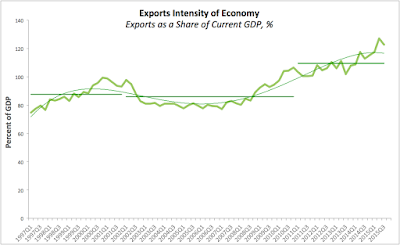 This is a remarkable set of numbers, driven predominantly by the activities of MNCs in Irish economy, and a number that is a signifier of all that is wrong with our National Accounts. Unlike countries that serve as a basis for production, Ireland serves as a basis for both some production of goods and services, but also as a platform for large scale tax optimisation. Vast majority of our exports are accounted for by MNCs trading from here, with large share of activity not taking place here, but being booked into Ireland from abroad. This distorts actual levels and value of production, but it also distorts the metrics of this economy’s openness to trade.

As the result on much of the MNCs activities, profits derived in Ireland by MNCs can go four ways:


We have zero ability to tell how much exactly do MNCs derive in profit from activities here and tax optimisation through here. But we do have a number that partially captures (3) above. This is provided by Net Factor Income Outflows to the Rest of the World and here is the chart showing how it evolved over time relative to Exports: 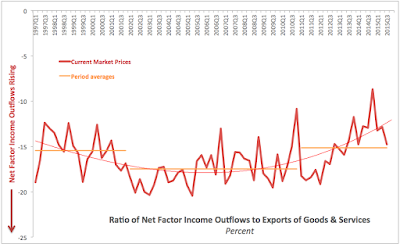 Do note that over 2011 - present period, average net outflow of factor payments abroad has fallen as a share of Exports from 17.5% in the period of 1Q 2002 - 4Q 2010 to 15.1%, the lowest period average on record. In other words, during the last 4 and 3/4 years MNCs operating from Ireland have been expatriating fewer profits abroad than in other periods in history. Question is: what happens to these retained profits over time? Obviously, these MNCs have absolutely no interest in re-investing these profits in Ireland (there is neither the scale for such reinvestment, nor the need). This suggests that either these profits are being parked until such a time as when they can be expatriated for the purpose of funding MNCs investments around the world, or the MNCs overall switched to declaring lower profits as a share of their exports.

Truth is - we do not know what is going on, though we do know that something is afoot.

Overall, however, Irish economic miracle’s dependence on MNCs-driven exports growth is growing, whilst transparency of MNCs operations here (at least as far as the National Accounts go) is declining. Happy FDI days are upon us… as long as the U.S., OECD, EU, and the rest of the host of states and organisations hell-bent on ending the free for all tax optimisation by corporates aren’t looking…

Now, consider external trade side of the National Accounts.

Irish Exports of Goods & Services stood at EUR62.52 billion in 3Q 2015, a rise of 12.4% y/y, after posting growth of 13.5% y/y in 2Q 2015 and 15.5% growth in 3Q 2014. Over the last four quarters, Irish Exports of Goods & Services grew, on average, at a rate of 13.4%, implying doubling of exports by value roughly every 5.5 years. If you believe this value to be reflective of a volume of real economic activity taking place in a country with roughly 1.983 million people in employment, you have to be on Amsterdam brownies. Over the 12 months through 3Q 2015, Irish economy has managed to export EUR235.67 billion worth of stuff, or a whooping EUR27.828 billion more than over the same period a year before. That’s EUR118,845 per person working at home or at work in Ireland.

However, in order to produce all these marvels of exports (and indeed to sustain living and consumption), Ireland does import truck loads of stuff and services. Thus, Imports of Goods and Services overall rose to EUR52.788 billion in 3Q 2015, up 18.9% y/y and beating 16.5% growth in 2Q 2015 and even 18.75% growth in 3Q 2014. Over the last four quarters average rate of growth in Imports of Goods and Services was impressive 17.6%.

Both, exports and imports changes are also partially driven by changes in the exchange rates, which are virtually impossible to track, since contracts for shipments within MNCs are neither transparent, more disclosed to us, mere mortals, and can have virtually no connection to real world exchange rates.

All of which means that just as in the case of our GDP and GNP and even Domestic Demand, Irish figures for external trade are pretty much meaningless: we really have no idea how much of all this activity sustains in wages & salaries, business income and employment and even taxes that is anchored to this country.

But, given everyone’s obsession with official accounts, we shall plough on and look at trade balance next. 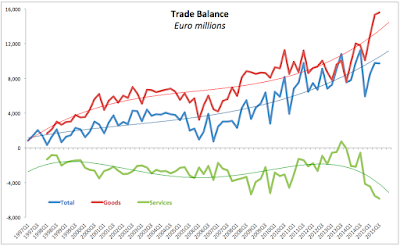 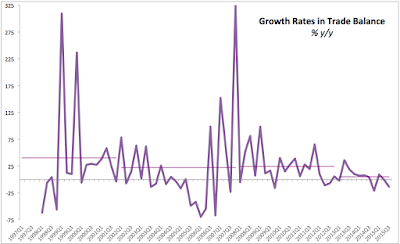 As chart above shows, overall Trade Balance dynamics have been poor for Ireland despite the record-busting exports and all the headlines about huge contribution of external trade to the economy. On average basis, period average for 1Q 2013-present shows growth rate averaging not-too-shabby 5.1% y/y. However, this corresponds to the lowest average growth rate for any other period on record, including the disaster years of 1Q 2008 - 4Q 2012 (average growth rate of 24.3% y/y).