My take on the Budget 2016 from the perspective of tech sector: https://www.siliconrepublic.com/video/dr-constantin-gurdgiev-on-budget-2016-stimulating-consumption-by-taking-credit-card-on-future

And more of the discussion of the Budget from technology sector and entrepreneurship perspective here: https://www.siliconrepublic.com/video/dr-constantin-gurdgiev-on-budget-2016-stimulating-consumption-by-taking-credit-card-on-future

Thanks to @iia for hosting the event and to the Silicon Republic for putting the discussions into broader public domain.

I covered the Budget in broader setting of economy-wide entrepreneurship and start ups formation here: http://trueeconomics.blogspot.ie/2015/10/141015-there-isnt-ireland-without-mnc.html.
Budget 2016 went in like a circus convoy entering a sleepy town: all pomp and all the excitement with little substance of change in tow.

Budget 2016 is a political budget and not an economic one. The point of all the smaller taxation measures in it, relating to people working for living, is simple: get those voters, vulnerable to swing Left to stay Centre. Sinn Fein got punched, few independents too; Labor got cookies to hand out. But even on this count, Budget 2016 was a fizzle of a firecracker with mostly smoke to show in the end:

Besides the above aberrations, the Budget was a net positive for current consumption spending, and was a net zilch for investment. Now, here the Government logic is completely off the charts. We are borrowing money to fund the Budget 2016 measures. And we are channeling this borrowed cash into activities that are not expected to generate a return, since these are non-investment activities. Multipliers for current consumption are miserable - most of the stuff we will be buying with the few quid we got in Budget 2016 is stuff made elsewhere and all we can collect in this economy from it is a small gross payout on labour in the retail and logistics sector. Whatever the social imperatives can be for such a 'stimulus' (and they are quite sound in some cases), it is poor economics and poor strategy.
When it comes to economics: Budget 2016 continues with a well-established theme of doing everything possible to demolish productive entrepreneurship spirit in the country. This time around, it is doing it with a flavour of simultaneously pretending that we are pro-entrepreneurs.
Take the following post-Budget 2016 numbers:
Of course, there is one, just one, area where Irish Government continues to impress the world: Multinationals-linked Tax Optimisation schemes. Ireland now has a Knowledge Development Box bestowing 6.25% corporate tax rate on... err... we don't quite know what. Promise is - it will apply to 'certain' patents and software copyrights. Which is just a tiny sub-set of actual business innovation and knowledge acquisition. And it is the subset that MNCs dominate. The Department of Finance estimate this measure to cost the Exchequer EUR50 million. Which really tells you just how much real activity this Knowledge Development Box is going to generate (answer is: very little) as opposed to how much of the old tax optimisation loopholes it is expected to absorb (answer is: plenty).
NY Times headline from yesterday says it all, really: 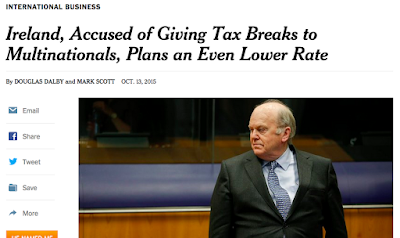 Our Knowledge Development Box is 'boxier' than that of the UK - our 6.25% tax beats their's 10% one. Case closed: MNCs win, and there is no economy beyond that which matters.
Anyone noticing that the world around us and the world inside Ireland is shifting toward supporting human capital-centric growth (yes, not labour or PAYE or specific sector, but Human Capital-centric)? Well, over 40 submissions from various bodies and individual analysts to Budget 2016 did. They also spelled out that this shift entails two key things:
People like myself have been drumming this beat for ages now. Still, Budget 2016 does nothing to resolve discriminatory taxation of human capital under the USC system, discriminatory taxation of human capital in self-employment under the USC system and broader income tax system, and it has done nothing in terms of even considering asymmetric risk loadings that entrepreneurs and self-employed carry compared to PAYEs. The Budget does help by introducing Earned Income Tax Credit to offset, partially (by 1/3rd) the glaring discrimination against self-employed inherent in the PAYE tex credit system. But this is hardly a measure to fully address the problem of the taxation system vastly out of tune with realities of modern economy.
Time to ask that pesky question, thus: Does this Government understand modern economy or do we still have leadership that thinks in terms of early 20th century proletarian world?
The sop of the 'entrepreneurship' measures unveiled in Budget 2016 is illustrative to the above question:
And that's it. Entrepreneurs and the self-employed, high Human Capital-endowed workers, start ups, their directors and advisers, as well as their key employees - all can now send their 'Thank You' cards to the Minister for all the love and support extended to them yesterday. Or they can continue to send their business to the UK and Northern Ireland, where quietly, without labelling themselves to be the 'Best ... Country to Do Business In' the fiscal powers are trying to run a more benign environment for investors, entrepreneurs and start ups.
My recent article for the Village Magazine [April-May edition] on Irish economy is now available on-line: http://www.villagemagazine.ie/index.php/2015/05/spring-unsprung/