Remember the Old America's Scariest Chart (http://trueeconomics.blogspot.ie/2014/06/662014-king-of-scariest-charts-is-dead.html) and my own New America's Scariest Chart (http://trueeconomics.blogspot.ie/2014/11/16112014-americas-scariest-chart.html). Well, a year ago, the formal one officially 'died'... as in disappeared from the mainstream media.

Question is: did it? Really?

So here is updating the Old America's Scariest Chart (and improving on the original) to current data: 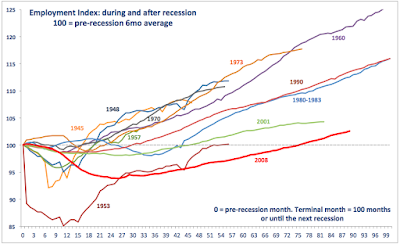 Summary of the lessons from the above: America's jobs recovery in the current cycle is the worst on record for post-WW2 period in terms of recovering the jobs lost. It is second worst on record in terms of post-recovery jobs growth (the worst case being 1953 recession, which simply run into 1957 recession, but taking the two recessions jointly actually delivers better performance than the current recovery period). 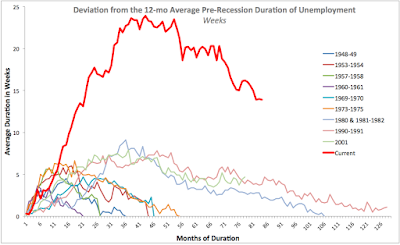 Summary of the lessons from the above: yep, this cycle is also the worst in history for average duration of unemployment.

Happy recovery, U.S. of A. and a happier one, yet, to Europe.