A friend recently did me a small service by summing up my comments on twitter on the Anglo Irish Bank - Irish Life & Permanent roundabout loans verdict:

I have provided an expert testimony on the matter in April in a court case involving the Central Bank, the Department of Finance and the Attorney General of Ireland, focusing precisely on the nature of the relationship between the Irish Financial Regulation authorities and the misconduct by banks and banks boards prior to 2008 Global Financial Crisis.  Quoting from my expert opinion:

46. In my opinion, and based on literature referenced herein, objectives of the function of enforcement in financial regulation are best served by structuring enforcement processes and taking robust actions so as to:
1. Target first and foremost the core breaches of regulatory and supervisory regimes, starting with systemic-level breaches prior to proceeding to specific institutional or individual level infringements [Targeting];
2. Timely execute enforcement actions, both in the context of market participants’ timing and timing relevant to the efficiency and effectiveness of uncovering the actual facts of specific alleged infringements [Timely execution];
3. Prevent or at the very least reduce, monitor and address any potential conflicts of interest in enforcement-related actions [Conflict of interest minimisation];
4. Assure that enforcement actions are taken within the constraints of the regulatory regime applicable at the time of alleged committing of regulatory breaches, while following well-defined and ex ante transparent processes [Applicability and quality of regulation and enforcement];
5. Assure that regulatory enforcement actions do not contradict or duplicate other forms of enforcement and remedial measures, including legal settlements [Consistency of legal and administrative frameworks]."
In simple terms, systemic lack of imposition of meaningful sanctions on senior policy, regulatory and supervisory decision-makers active in the Irish financial services in the period prior to the Global Financial Crisis severely undermines the signalling and deterrence functions of regulatory enforcements. Convicting bankers for mis-deeds is fine, but not sanctioning regulatory and supervisory officials is not conducive to establishing any tangible credibility to the regulatory enforcement regime. Worse, it establishes a false sense of security that the system has been repaired and strengthened by convictions achieved, whilst in reality, the system remains vulnerable to exactly the same dynamics and risks of collusion between regulators and supervisors and the new financial services executives.
It is, perhaps, telling that my counterparts providing expert opinions in the case on behalf of the Central Bank, Department of Finance and the Attorney General of Ireland have based their analysis on the axiomatic assumption that no regulatory, supervisory and enforcement staff can ever be held liable for their actions or inactions in the events and processes that led to the Global Financial Crisis. No matter what they have done or refused to do. Full impunity must apply.
Here is a letter by Mr. John Flynn informing the Banking Inquiry Chairman, Ciaran Lynch, T.D. about the issue of overcharging at the Anglo Irish Bank, subsequent extent of the problem in legacy-resolution institutions and detailing the substance of the developments in the U.S. court case relating to Anglo overcharging: 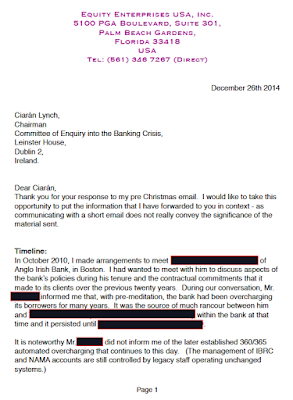 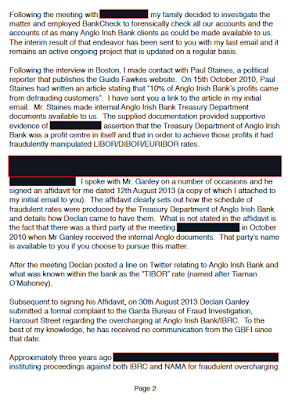 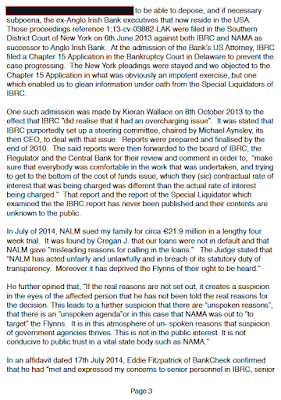 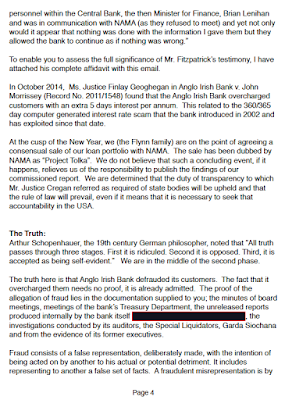 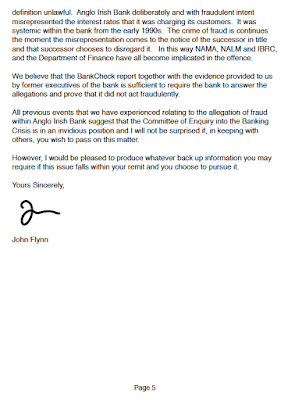 Note: I was informed by Mr. Flynn that he received no substantive reply to his communications to the Banking Inquiry.

Note: You can follow the topic of overcharging and other sharp practices and questionable strategies deployed in the post-banking crisis resolution process in Ireland here:

Per Mr .Ganley's Affidavit: he met Mr. R.K. - former executive in Anglo Irish Bank in October 2010 and during the course of his discussion with Mr. R.K., Mr. R.K. "told me that one of several areas that should be pursued should be the opportunistic over charging of interest rates targeting multiple customers of Anglo. He said that it wasn't a great secret within Anglo and that it had been standard practice for many years. He said that the skim on these loans was jokingly known as "TIBOR" after a Mr. Tiarnan O'Mahoney, who he said oversaw this practice at the bank. He explained that TIBOR was the fake rate that Anglo would apply, pretending that it was the daily DIBOR rate. He said that it would be easy to check, by just looking into what the actual DIBOR rate was on a given day and then checking what Anglo had reported it to be to various customers. The resulting mark up would go to Anglo's coffers."

Now, take a slightly different angle on this. Suppose you go to a Bank and ask for a tracker mortgage loan. Suppose you get a quote of "ECB rate plus 1%". You take the loan and subsequently receive a statement that your interest rate charged in the past month was 1.35%. Except that 1.35% = ECB rate of 0.05% + 1% declared margin + 0.3% clerk-own make up margin. You contracted to pay 1.05%. You paid 1.35%. The clerk pocketed 0.3% as personal gain. How fast would the law be brought down on that clerk's case? Oh, in a nanosecond.

"I expressed a certain degree of disbelief that such a practice could run for more than a year or two without someone spotting it, a regulator, auditor, a professional investor (e.g. a bond investor) or other. I also said it was hard to imagine that the practice was well known."

"Mr. R.K. then said that not only was it the case but that he even had a copy of internal Anglo Irish Bank minutes where it was covered as a matter of fact practice."

Now, note, the above alleges explicitly that the fraud was conducted repeatedly, regularly, knowingly and was approved by the bank.

"He offered to show me a copy, I said "yes" and he proceeded to produce a copy of a document that appeared to be minutes of an Anglo Irish Bank meeting covering TIBOR. I then made arrangements to forward a copy of the document to a media outlet in London, who proceeded to use their documents as part of their basis for a report on the "TIBOR" story…

One of the pages was a schedule of "TIBOR" rates that the bank has charged to their clients as genuine DIBOR rates over a provisos period. I checked these rates against the official rates for the same period and confirmed that none of the rates replicated the actual published DIBOR rates. It appeared from the documents that, per Mr. R.K.'description, the official DIBOR rates had all been randomly and substantially loaded by differing amounts by Anglo Irish Bank."

Now, let us return to that clerk in your local bank example. Suppose that there is evidence showing that the said clerk perpetrated the same fraud time after time after time with all borrowers who came to his office to secure a mortgage. And that he notified his superior of this fraud and arranged to report regularly on his progress of defrauding banks' clients. How long will it be, in your view, before the weight of law is brought down onto the bank clerk's superior?

We had several cases in the past when bank employees would engage in stealing clients funds. These cases were prosecuted, wrong was addressed and clients were compensated. But when it comes to "TIBOR", even after two courts establish evidence that Anglo Irish Bank engaged in sharp practices, and years after this is notified to the Irish authorities by the likes of Mr. Ganley and John Morrissey and John Flynn and others, there is static silence in the air on the topic from all Irish authorities concerned.

Nope, I don't have much of conviction we will see a definitive conclusion to this Anglo/IBRC saga any time soon.
Note: Mr. Ganley's affidavit references the fact that in late 2010 the TIBOR scandal was made public in international press and through other media channels. In other words, Irish Government and authorities were aware of the problem since then. They are yet to reply on how it can be rectified.
Yesterday, I posted about Deputy peter Mathews' speech in the Dail concerning the egregious sharp practices in the Anglo Irish Bank and IBRC (link here). Today, I posted my point of view taking these practices to the macro level in relation to the remaining legacy of Anglo/IBRC (link here).

In his speech, deputy Mathews quoted from the Black & Company Solicitors' letter on behalf of Mr. John Morrissey and I quoted from the same some more in my post (linked above).

Here is the actual copy of the letter (I had to break it into segments in order to post on this platform). All sections are sequential and reproduce the letter in its entirety. You can click on each segment to enlarge. 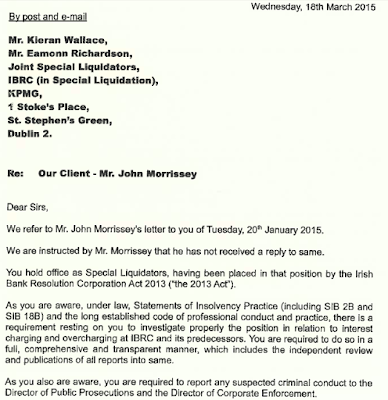 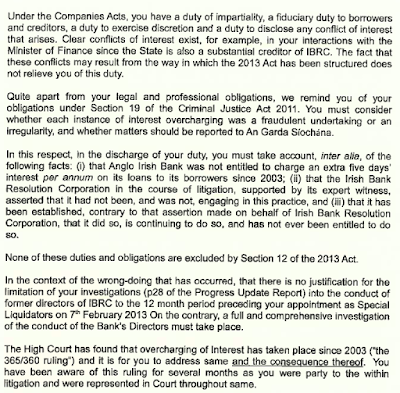 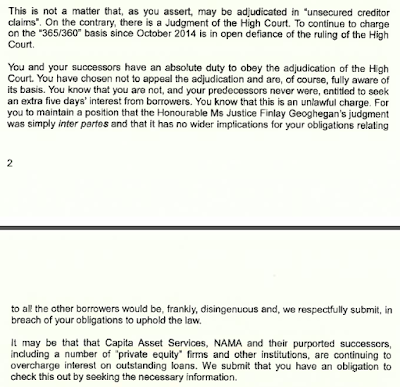 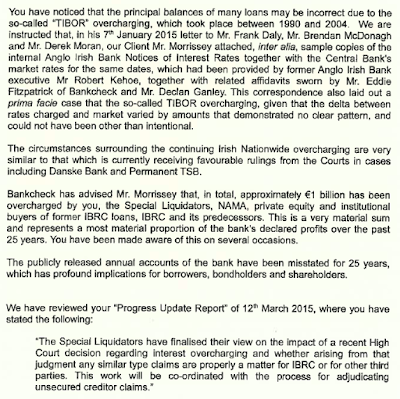 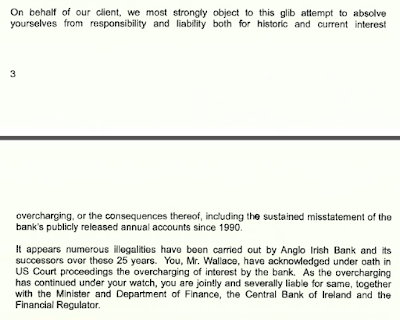 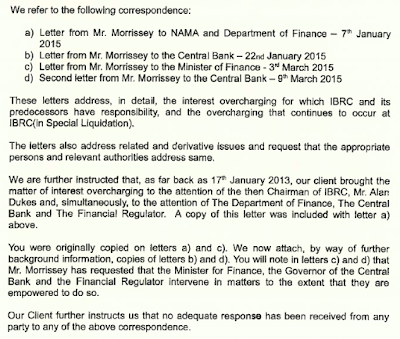 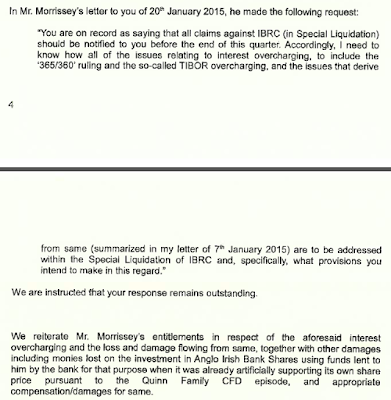 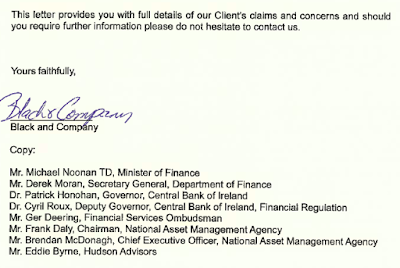 I provide no comment beyond what has been already provided in the two posts linked above.