The election 2016 is a catalyst-free contest that has been shaped by the political parties attempts to understand the mind of the electorate, while the electorate has been struggling to make up its mind about what the pivotal issues of the election should be. Compounded by the  epic gaffes of the reality-skipping life-time politicos (take that Enda Kenny pill, ye old comedian) and we had an election devoid of real ideas and ideals as far as the mainstream parties go.
Harder Left and genuine Centre-Left (e.g. Social Democrats and majority of the independents) have attempted to focus the elections on the issues relating to the lagging nature of economic recovery in the domestic sectors - an issue that, traditionally, has been the core breadwinner for the Labour. However, having completely abandoned any pretence at ideals-based, principles-rich politics, the Labour has thrown its weight behind the FG-led attempt to steer plebiscite into a debate about a general (and to majority of us abstract) notion of policy continuity and stability of governance as the panacea for the ‘continued recovery’. Topical issues and specific policies aimed at actually producing a real recovery that is not stuck in the canyons of tax arbitrage by the MNCs became the victims of this absurd departure from the world of the living into the world of FG/LP.
Even shielded from competition by being effectively the only Right-of-Centre (in the Politics of Boggerville 101-style of Enda Kenny and Michael Noonan) party, FG has managed to squander the election by such a massive margin, one has to wonder how on earth can the party continue to pretend to represent anyone other than a handful of clientilist farmers, rent-seeking businessmen and a bunch of conservative civil servants.
Not surprisingly, the key battles of the GE2016 have been waged in the contestable space created by Labour’s departure from its social and electoral core.
Failure of Labour and FG to consolidate Centre-Left and Centre has meant that the FF was left significant room to recover some of its electoral fortunes. In a typically FF fashion, the ‘new party of the Centre-Left’ has managed to deliver very few tangible new ideas, but provided plenty oppositional rhetoric and old-fashioned pork barrel promises.
All in, Election 2016 was dominated by the lack of big thinking, shortage of specific ideas, and a large doses of surrealism. Neither global, nor European context entered the mainstream debates; economics swung from ‘tax and don’t spend’ to ‘don’t tax and do spend’ heralding the arrival of the Celtic Tiger 3.0. The entire circus of the ‘fiscal space’ debates was yet another opportunity for Enda Kenny to play the role of a cross between the U.S. Republican contestants Ben Carson and Jeb Bush - a dynamic combo of a man who can’t run for the office and a man who doesn’t know he wants to run for the office. Money, advisers, analysts, party machines and even track record - all squandered on disconnecting from the voters.
In contrast, three smaller political groupings / parties: Renua from the Right and Social Democrats from the Centre Left and the Independent Alliance have mangled to produce far reaching, ambitious, even if, at times, poorly structured policies proposals. The Independent Alliance and Soc Dems have fielded some really strong, highly impactful candidates with ideals and occasionally ideas of their own. These three forces, relatively weak and surrounded by a sprinkling of other independents and political groupings brought into Election 2016 something missing in Irish politics - integrity, honesty, openness and debates. No matter how strong their showing in the current Election has been, they provided a crucially important alternative to the stale politics of Irish elites: the Axis of FG, FF and Labour.
The most surprising aspect of the Election 2016 is the complete and total disregard by the core political parties for the voter perception of Irish politics as a palace of parochialism, corruption and cronyism. After 5 years of the current Coalition effectively replaying old FF book on cronyism and favouritism, while droning on about the ‘New Era in Politics’, the litmus test of this electoral cycle should have been a focus on political system renewal and reforms. This simple was a task too difficult for the political system to handle and even contemplate. Which, sadly, means that our Permanent Government - the cabal of unelected advisers and senior civil servants - remain in place, aided and abetted by the school of hungry and agile piranhas from the private sector always ready to issue a research note or two about the need for continuity, the necessity of predictability, the value of stability and the fabled markets’ longing for conformity with the status quo.
All hail Tipperary North constituency for delivering much of it in a concentrated form once again… 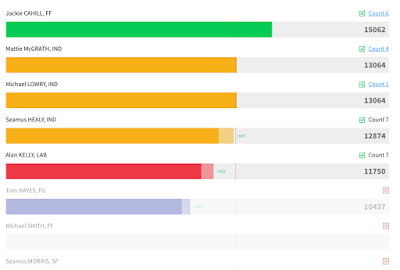