The Affordable Care Act (ACA), perhaps best known as Obamacare, has many problems. But for all its problems, one aspect of it has been widely proclaimed by the program's biggest supporters to be the most successful aspect of it in the states where it has been implemented. As we're about to show you however, the thing that has been most successful about it is directly contributing to its doom.

The aspect to which we're referring is the ACA's expansion of state Medicaid program eligibility, which allows states that choose to expand their Medicaid health care welfare programs to enroll Americans who earn up to 138% of the federal poverty level in them. By contrast, states that choose to not expand their Medicaid welfare programs continue to only enroll Americans whose annual income places them at or below 100% of the federal poverty level. The map below, which we've excerpted from a FamiliesUSA infographic, identifies the states that have and have not expanded their Medicaid enrollment to date. 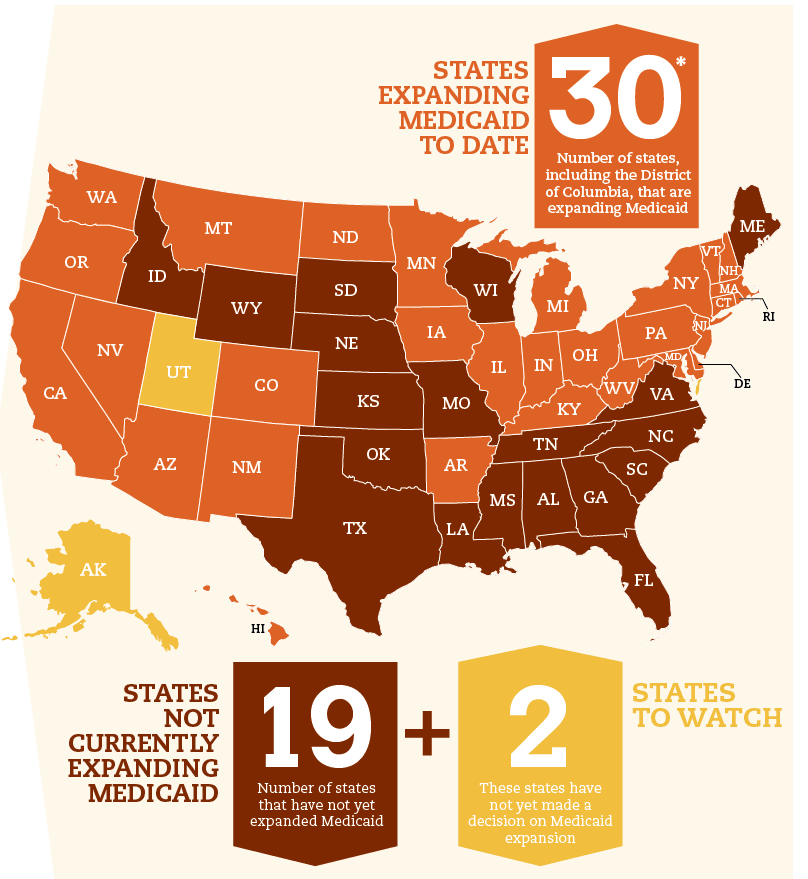 Beyond allowing this expansion of state Medicaid programs, the Affordable Care Act also intended to provide access to federal government subsidies for health insurance coverage for Americans earning up to 400% of the federal poverty level. Those Americans would only be able to obtain this subsidized coverage by enrolling in the health insurance plans that would be available through the Affordable Care Act "marketplace" (or ACA exchange) for their state.

In selecting a particular level of coverage, an individual who could reasonably expect to be healthy would benefit by obtaining the lowest-tier plans (catastrophic, Bronze, Silver), which would potentially reduce their out-of-pocket expenses by the greatest amount. An individual who reasonably expects to have high health care costs however would benefit by enrolling in the highest-tier plans, (Gold and Platinum), since those plans would effectively pre-pay their expected health care expenses and then have the insurance cover the amount above and beyond their plan's deductible.

In this table, we've shaded the background of the cells in which the combined cost of subsidized or unsubsidized health insurance exceeded the actual $7,500 that our hypothetical 27-year old incurred in health care expenses in red. The unshaded cells are those for which it would make sense for such an individual to have the indicated level of health insurance coverage.

We separated each of the states into two categories: those that had expanded the eligibility for their state Medicaid programs under the terms of the Affordable Care Act and those that did not. The chart below reveals what we found for the percentage enrollment by Obamacare metal plan type for both groups. 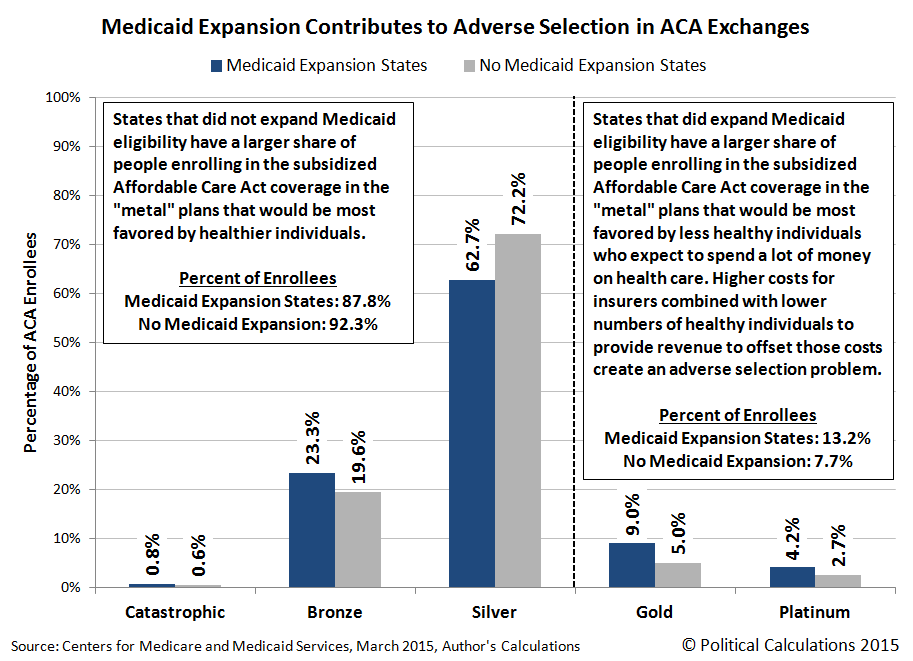 In this chart, we observe that the states that did not expand their Medicaid programs have a much larger share of their ACA-enrollment occurring in the lower-tier metal plans that would tend to be favored by healthier individuals. Meanwhile, in the states that expanded the enrollment of their Medicaid programs under the law, we find that a significantly larger portion of their ACA enrollments were in the plans that would be favored by less healthy individuals.

The seemingly small 5.5% difference between these two figures becomes exceptionally significant when you consider how extremely concentrated health care expenditures are in the United States, where just 5% of U.S. patients are responsible for generating 50% of all health care spending in the nation. 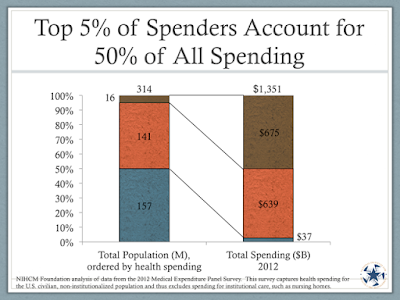 Because of that concentration of spending, the ACA exchanges in Medicaid-expansion states are much more at risk of what's called adverse selection, which is also called a death spiral. Here, because ACA exchange health insurers in these states have too high a percentage of their customer base having such high covered medical expenses, they are in the situation where they must significantly increase their prices (premiums) to cover their costs. But when they do so, they negatively affect the healthier consumers they need to buy health insurance, even though those consumers don't have the health care expenses that would justify their paying higher health insurance premiums.

As a result, a number of those healthier consumers choose to drop their health insurance coverage, as it does not provide enough of a benefit to them to justify paying its cost - and it's certainly a lot less costly for them to pay the Obamacare income tax instead. But the insurers still have to cover the costs of health care for their comparatively unhealthy enrollees, creating the need to further increase health insurance prices. That dynamic creates an adverse feedback loop, with a cycle of health insurance price hikes and dropping enrollment by healthy consumers, where ultimately, the ACA health insurers reach the point where they cannot afford to continue selling health insurance, so they themselves drop out of the market.

The reason why Medicaid-expansion states have this increased risk for adverse selection turns out to completely contradict what a number of economists, think tanks and journalists believe: that non-Medicaid expansion states would develop the problem of adverse selection for their state's health insurers while states that did expand their Medicaid enrollment would not, because people who would be eligible to enroll in the expanded Medicaid program are "sicker" than those with higher incomes. Real world evidence says that such a belief is completely wrong.

We can demonstrate the real world facts with a single chart and a single observation. The observation is this: younger people are healthier than older people. Now, here's the chart, in which we've shown the percential income distribution of the U.S. population by age group, indicating the 138% of federal poverty level income threshold for a single-person household in the 48 contiguous U.S. states. 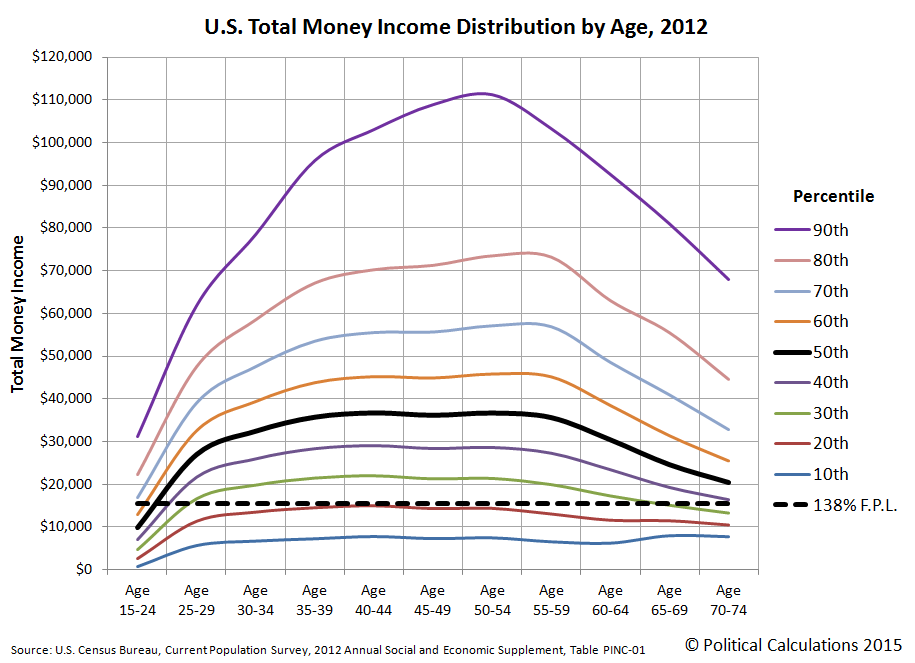 While we've adapted an old chart showing the income distribution by age for 2012 to illustrate our point, the data is still very close to what would apply for the present, as the income distribution of the U.S. does not change significantly from year to year and the federal poverty threshold itself is just $600 higher in 2015 than it was in 2012.

Going by this chart, we see that over 66% of the Age 15-24 population of income-earning Americans in the U.S. would qualify for the Medicaid expansion, as do nearly 28% of the Age 25-29 group and 23% of the Age 30-34 group. Americans from ages of 35 to 59 hover around the 21-22% mark, while the Age 60-64 group rises to nearly the 27% mark. Meanwhile, Americans Age 65 or older would be eligible for Medicare instead, so that portion of the population falls outside the consideration for eligibility in the Medicaid program.

That very high weighting toward the youngest, healthiest Americans in the expanded Medicaid-eligible portion of the population then is why states that expanded their Medicaid enrollment now have a much greater risk of adverse selection developing in their Obamacare exchanges. And that's the reason why the expansion of eligibility for Medicaid, which has been proclaimed to be the most successful part of the implementation of the Affordable Care Act, tips the scales against the success of Obamacare by directly contributing to its ultimate doom of death by adverse selection.

U.S. Department of Health and Human Services Office of Assistant Secretary for Planning and Evaluation. 2012 HHS Poverty Guidelines. 2012 Poverty Guidelines for the 48 Contiguous States and the District of Columbia. [Online Article]. Accessed 2 June 2015.