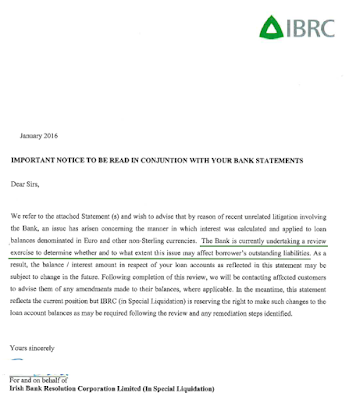 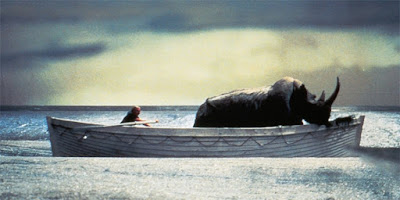 Per Mr .Ganley's Affidavit: he met Mr. R.K. - former executive in Anglo Irish Bank in October 2010 and during the course of his discussion with Mr. R.K., Mr. R.K. "told me that one of several areas that should be pursued should be the opportunistic over charging of interest rates targeting multiple customers of Anglo. He said that it wasn't a great secret within Anglo and that it had been standard practice for many years. He said that the skim on these loans was jokingly known as "TIBOR" after a Mr. Tiarnan O'Mahoney, who he said oversaw this practice at the bank. He explained that TIBOR was the fake rate that Anglo would apply, pretending that it was the daily DIBOR rate. He said that it would be easy to check, by just looking into what the actual DIBOR rate was on a given day and then checking what Anglo had reported it to be to various customers. The resulting mark up would go to Anglo's coffers."

Now, take a slightly different angle on this. Suppose you go to a Bank and ask for a tracker mortgage loan. Suppose you get a quote of "ECB rate plus 1%". You take the loan and subsequently receive a statement that your interest rate charged in the past month was 1.35%. Except that 1.35% = ECB rate of 0.05% + 1% declared margin + 0.3% clerk-own make up margin. You contracted to pay 1.05%. You paid 1.35%. The clerk pocketed 0.3% as personal gain. How fast would the law be brought down on that clerk's case? Oh, in a nanosecond.

"I expressed a certain degree of disbelief that such a practice could run for more than a year or two without someone spotting it, a regulator, auditor, a professional investor (e.g. a bond investor) or other. I also said it was hard to imagine that the practice was well known."

"Mr. R.K. then said that not only was it the case but that he even had a copy of internal Anglo Irish Bank minutes where it was covered as a matter of fact practice."

Now, note, the above alleges explicitly that the fraud was conducted repeatedly, regularly, knowingly and was approved by the bank.

"He offered to show me a copy, I said "yes" and he proceeded to produce a copy of a document that appeared to be minutes of an Anglo Irish Bank meeting covering TIBOR. I then made arrangements to forward a copy of the document to a media outlet in London, who proceeded to use their documents as part of their basis for a report on the "TIBOR" story…

One of the pages was a schedule of "TIBOR" rates that the bank has charged to their clients as genuine DIBOR rates over a provisos period. I checked these rates against the official rates for the same period and confirmed that none of the rates replicated the actual published DIBOR rates. It appeared from the documents that, per Mr. R.K.'description, the official DIBOR rates had all been randomly and substantially loaded by differing amounts by Anglo Irish Bank."

Now, let us return to that clerk in your local bank example. Suppose that there is evidence showing that the said clerk perpetrated the same fraud time after time after time with all borrowers who came to his office to secure a mortgage. And that he notified his superior of this fraud and arranged to report regularly on his progress of defrauding banks' clients. How long will it be, in your view, before the weight of law is brought down onto the bank clerk's superior?

We had several cases in the past when bank employees would engage in stealing clients funds. These cases were prosecuted, wrong was addressed and clients were compensated. But when it comes to "TIBOR", even after two courts establish evidence that Anglo Irish Bank engaged in sharp practices, and years after this is notified to the Irish authorities by the likes of Mr. Ganley and John Morrissey and John Flynn and others, there is static silence in the air on the topic from all Irish authorities concerned.

Nope, I don't have much of conviction we will see a definitive conclusion to this Anglo/IBRC saga any time soon.
Note: Mr. Ganley's affidavit references the fact that in late 2010 the TIBOR scandal was made public in international press and through other media channels. In other words, Irish Government and authorities were aware of the problem since then. They are yet to reply on how it can be rectified.