In my view, the write down should take into the account discounts at which current debt holders have taken their long positions, so that vulture funds and distressed debt speculators take a larger haircut than someone who held debt over longer term and bought it at lower discounts. This will put heavier penalty onto distressed debt speculators and reduce penalty on investors who acquired Ukrainian debt before the crisis started. 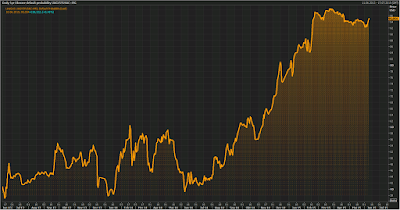 The latest spike in default probabilities took place following IMF comments (see:  http://www.imf.org/external/np/tr/2015/tr061115.htm) that effectively altered markets expectation as to whether or not the IMF will allow Kiev to default on private debt. It now appears that the IMF has little problem with Kiev using strong-arm tactic of threatening (and enacting) a default on private sector debt. Prior to this week, the understanding was that the IMF will not lend to Ukraine if it goes into a default - a position that allowed private debt holders to argue that their intransigence is supported by the pressure from the IMF on Kiev to conclude a deal. Now, that pressure is gone and IMF seemingly is giving green light to Kiev to default, as long as such a default does not take place after any deal conclusion.

Update: The strategy deployed by IMF in the case of Ukraine - the strategy of actively forcing a default as a credible threat to private sector holders of debt - is not new. It was outlined in this document from 2002 (see page 28 of http://www.imf.org/external/pubs/ft/exrp/sdrm/eng/sdrm.pdf): "There may be a risk that creditors would withhold an extension of the stay in the hope that the IMF would provide more financing or call on the member to make additional adjustment efforts. For example, even in circumstances where the member is implementing good policies and negotiating in good faith, creditors may refuse to extend the period of the stay as a means of persuading the member to turn to the IMF for financing that could enhance the terms of any restructuring. The creditors could threaten to lift the stay to force the debtor to agree to more adjustment than contemplated under the IMF-supported program. Such risks could be reduced, however, by the resolute application of the IMF’s policy of lending into arrears, under which it signals its willingness to continue to support a program, even if the member has interrupted payments to its creditors."