As Greece is set for a referendum on the bailout, here is the latest opinion poll: 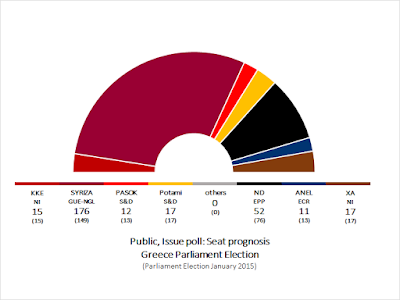 In short, if there is an election called now, it appears Syriza-led Left will win with a stronger mandate (187 total seats against January outrun of 162 seats).

Meanwhile, the dreaded Plan B (forced default and, associated Grexit) now appears to be Plan A for the euro area: http://www.reuters.com/article/2015/06/27/us-eurozone-greece-idUSKBN0P40EO20150627. All the while, EU 'leaders' continue to spin various versions of their objectives and intentions, as evidenced by the European Council President, Donald Tusk's most recent statement that "Greece is & should remain euro area member. In contact with leaders to ensure integrity of euro area of 19 countries". Whatever this means, anyone's guess, but referendum is the most democratic form of governance one can imagine in modern setting and the 'bailout' deal faced by the Greek Government is such a significant alteration of the structural conditions to be endured by the Greek people that a referendum is de facto required in order to either accept or reject these conditions. The problem is as follows: