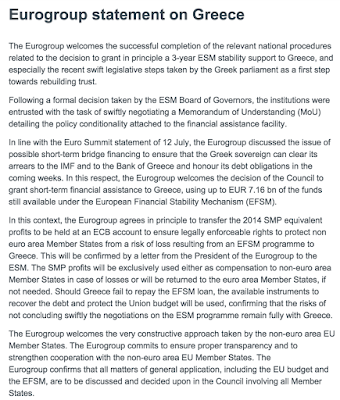 In effect, Eurogroup is driving home the tactical advantages gained by over-extending Bridge loan negotiations into the last minute and from Tsipras' total surrender at July 12-13 meetings. Greece has no where to go, but to ESM at this stage, so my suspicion is that MoU will be tougher than Bailout in Principle position of July 12-13.
Yesterday, I covered the possible routes to structuring bridge financing for Greece (see this post with today's earlier update). Via WSJ, here is the list of debts coming due over July-August, inclusive of two payments to IMF that are now in arrears (see IMF statement below): 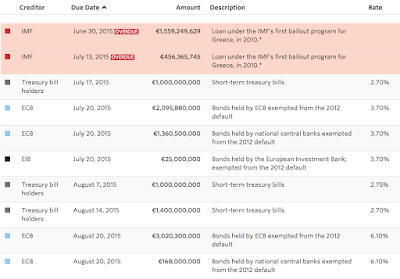 And the IMF statement from last night: 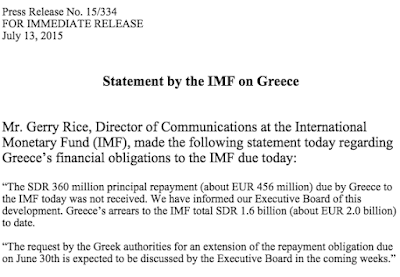 Following the marathon meetings (14 hours-long Eurogroup followed by 17 hours-long Euro Council) the Greek 'deal' was heralded in the media and the markets as some sort of the Great Revelation - a solution to fix all prior non-solutions, a final fixing of the Greek economy and the end to all the endless bailouts of the past.

Of course, cynics noted that solving debt overhang (already officially recognised by the IMF as unsustainable) by issuing more debt may not be a good idea… but cynics are here to be ignored by the Euro optimists who define their own reality.

But never mind all the 'long run' stuff. Five hours into a 'unanimous' Eurogroup decision on Greece, there is neither much of a unanimity, nor much of a decision left.

Eurogroup agreed, amongst other things, that:

Today, there was a shorter Eurogroup meeting to sort that little bit of 'unanimity' out. And the conclusion was: err… no unanimity and:


Finland's Fin Min Alexander Stubb said that "Greek Bridge Financing Still an Open Question. I foresee those negotiations being very difficult because I don't see many countries having a mandate to give money without any conditions." Oops… as they say in Helsinki. Slovakia's Government has stated they oppose any lending to Greece, including both bridge and long term financing. Austria, Estonia, The Netherlands and a number of other countries will need to approve every move via their parliaments. All three been pretty sceptical on 'bridge financing' from July 6th on. Slovenia is set against the bridge funding too.

And then there's Germany - which is, for now, sitting pretty quiet on the topic, but don;t expect an easy push over from Merkel - Schäuble duo. After all, the latter has managed to square off with Mario Draghi on the topic of ECB operations in a nasty exchange yesterday.


Beyond the unanimity bit... logistics

Beyond the unanimity bit, there's a technicality or logistics of structuring the deal… bridge financing is hard to construct, given the Byzantine (actually far worse, by now) European institutions.

There are basically two possible options.

Option 1: Using EFSM bailout fund to loan money to Greece. The option is easier, as it does not require unanimity, but can be passed on the basis of QMV. The fund, however, does not have enough money to finance July-August liabilities due on the Greek side. Reportedly, the EFSM only has EUR11.5 billion available (although some reports put the figure at EUR13.2 billion). And EFSM is no longer an active lender, since it is superseded by another fund, the ESM. Even when the EFSM was operative, it was limited to co-funding bailouts with IMF involvement. IMF is not a party to any bridging loans arrangements, and indeed is not a party to the entire Bailout 3.0 package agreed 'in principal' this am. Added complication: EFSM can be activated by a qualified majority, but a QMV of EU28, not euro area alone. Back in 2011, Britain voted against the use of the EFSM to bail out Greece for a second time.

Option 2: Greece funding itself via issuance of T-bills, selling these to the banks with the banks using ECB ELA to finance these purchases. Which carries two problems with it. One, ECB is yet to hike ELA. Two, T-bills are short term bonds and Greece is constantly rolling over substantial quantity of them in the markets. Issuing more will clearly impair Greek Government ability to secure short term funding. And it will also likely trigger serious discontent within euro area 'core' states - the hawks that 'guard' ECB's prohibition on 'monetary financing'.

Option 3: A combination of Option 2 and bilateral loans. The problems, in addition to Option 2 is that some countries (Finland and Slovakia - explicitly, Germany and the Netherlands, for now implicitly) have ruled out participating in the scheme. Which makes such lending a tough sell for other member states. Italy stated already that it will only supply bilateral loans if all other euro area states do so.

Option 4: Using SMP profits accumulated at the ECB and in the national central banks from Greek bonds coupon payments to lend to Greece from ECB to repay ECB and IMF loans. Problem here is that 2014 profits still retained amount to EUR1.9 billion, while 2015 profits yet to be paid amount to 1.4 billion. Clearly not enough to close the gap.