An interesting, if short, note on woeful state of global trade flows from Fitch (link here).

The key point is that: 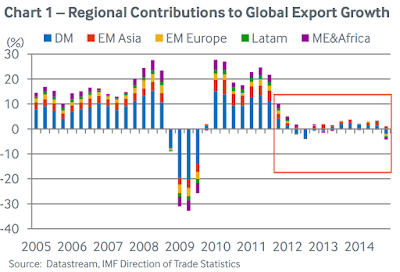 Most importantly, the rot is extremely broad - across all major regions, with no base support for trade flows.

One of the drivers - EMs lack of internal demand: 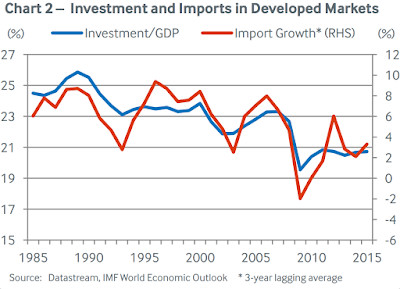 However, the EMs are just one part of the picture. Per Fitch, "Since 2012, global export volumes have consistently grown by less than 5%. Performance by value has been even worse due to the fall in global trade prices, again led lower by commodities. In April 2015, global export prices were down 16% year on year."

"There are several structural explanations for the continued weakness in global trade in addition to the GFC’s cyclical effects":

Fitch note, while highlighting a really big theme continuing to unfold across the global economy, misses the real long-term drivers for the collapse of trade: the world is undergoing deleveraging cycle in terms of Government and private debt, reinforced by the structurally weaker growth environment on both demand and supply sides of the growth equation. The result is going to be much more painful that Fitch (and majority of analysts around) can foresee.