Alongside the Article IV (covered in three posts all linked here: http://trueeconomics.blogspot.it/2015/08/3815-imf-on-russian-economy-private.html), the IMF also released a series of technical papers, including one on the state of health of the Russian financial markets.

Top-level conclusion: "using a comprehensive index of financial development, to identify potential bottlenecks", the study "…finds that Russia’s financial markets are relatively deep, accessible and efficient, but that financial institutions, in particular banks, have much to do to improve their efficiency and create further depth. Russia could potentially gain up to 1 percentage point in GDP growth on average over the medium-term from further deepening and efficiency improvements. Policies towards this outcome include reducing banking sector fragmentation through consolidation via increased supervision and tightening capital standards; strengthening the role of credit bureaus and collateral registries to reduce information asymmetries; and removal of interest rate rigidities to foster competition."

Specifically, one key bottleneck is the distribution of sources for finance: "Russian companies rely much less on external financing in general and on bank financing in particular, to finance investment compared to their peers in Eastern Europe and Central Asia or in their upper middle income group. Typically, internal resources, state funds and controlling entities are responsible for financing up to 80 percent of business investment. As a result, banks contribute only 6 percent of funding for business investment, with the bulk of investment financed from retained earnings." 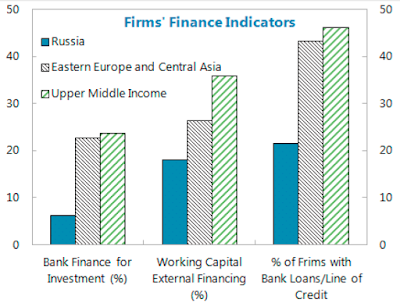 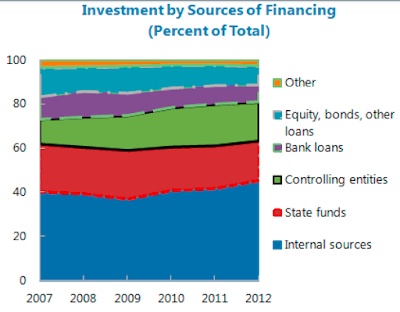 Now, one can agree with IMF on the need for Russian companies to tap more diversified investment channels, but one has to also observe two key risks inherent in this suggestion:

So IMF can propose, but I seriously doubt Russian companies will be rushing to borrow at a breakneck speed any time soon. 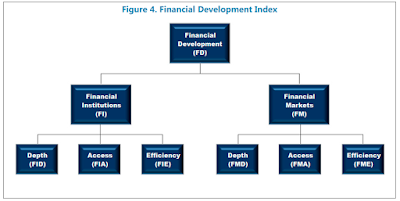 So IMF main conclusion is quite surprising for those not familiar with Russian markets: "Russia’s financial markets are relatively developed but financial institutions lag behind in terms of efficiency and depth." 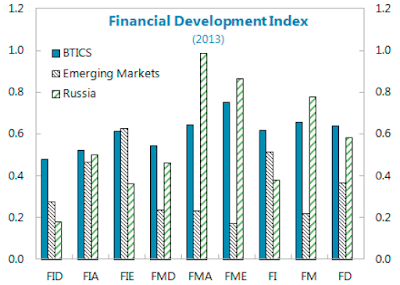 Big bottleneck is in financial depth, where "…financial institutions in Russia are comparatively dominated by the banking system, with fewer to non-existent assets, in percent of GDP, in pension funds, mutual funds and insurance industry. Moreover, the banking system lacks depth with domestic credit at about 50 percent of GDP being the lowest in the BTICS group." 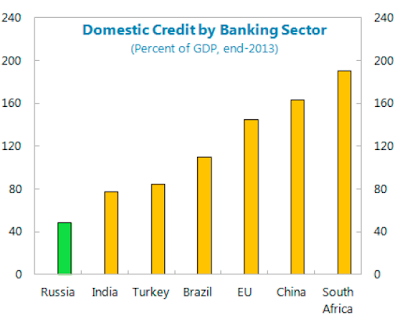 Why? "With some 850 banks operating, the Russian banking system is highly concentrated at the top, and fragmented at the bottom":


This "…undermines lending to companies and SMEs as their ability to both extend credit and diversify across companies is limited while lending to consumers is usually the dominant form of credit." 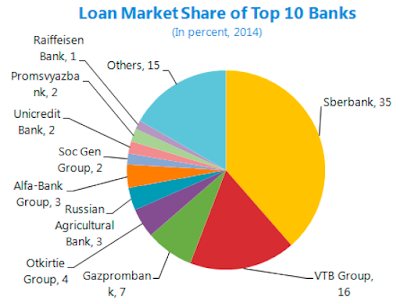 What is there to be done to get Russian banking and financial systems up to speed?

IMF benchmarks the potential scope of reforms against the absolute best scenario (not scenario consistent with other comparative economies), which makes things sound quite a bit optimistic, or unrealistic. The menu is predictable and relatively straightforward:

As usual for IMF: neat pics, cool stats, a small pinch of useful proposals and a list of predictable ideas that make sense… only if you do not spot their faulty logic…