Has euro area recovered from the crisis on a per-capita basis?

Let’s take a look at the latest data available from the Eurostat, covering the period through 4Q 2015.

Looking at the Nominal gross disposable income per capita first: in 4Q 2015, income per capita in the euro area stood at +6.67 percent premium over the pre-crisis peak (measured as an average of 4 highest pre-crisis quarters) and at +3.86 percent premium to the overall highest pre-crisis quarter reading. This is not new: the measure attained its pre-crisis peak within 6 quarters following the peak quarter (3Q 2008). So by this metric, the answer to the above question is ‘Yes’.

Here’s a chart to illustrate: 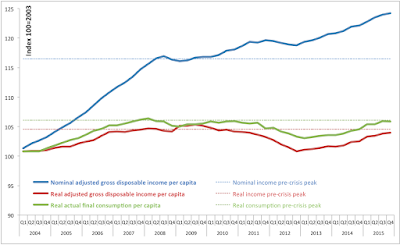 Couple of interesting charts showing the latest annual data on individual consumption in the EU.

First, volume indices of real expenditure per capita in PPS (with index for each year set at EU28=100) (these figures are adjusted for inflation and exchange rates differences. 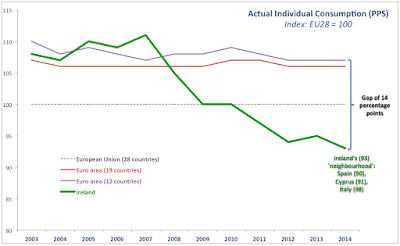 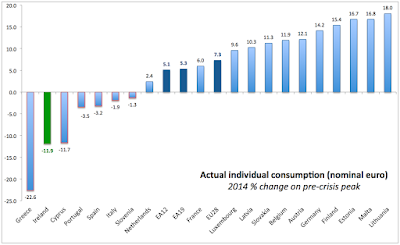 In summary, even after the onset of the 'fastest recovery' in the euro area, Ireland's actual individual consumption of goods and services remained au-par. In 2014 itself, our individual consumption grew 6.0% y/y - second fastest in EU28 after Luxembourg - but years of past devastation meant that our consumption remained second worst hit compared to pre-crisis levels. In 1999, Ireland ranked 12th in terms of individual nominal consumption in the EU 28 group of states. Our best year was attained in 2008 when we ranked 3rd. In every year between 2011 and 2014, we ranked 11th. In simple terms, the entire history of the euro area membership for Ireland has been equivalent to, largely, standing still in terms of our relative wellbeing compared to other EU states.