It is worth noting that the first measure was roughly similar to the majority of 'sustainable debt resolution' measures introduced in Ireland (e.g. temporary relief on payments, split mortgages, etc) that temporarily delay repayments at the full rate. Even worse, in Irish case, policy instruments that delay repayments are generally associated with roll up of unpaid debt and in some cases, with interest on the unpaid debt, thus increasing life-cycle level of indebtedness.
The second set of measures used in the NBER study are broadly consistent with debt forgiveness measures, where actual debt reduction took place at both the principal and interest levels.
So what did NBER study find?
"We find that the debt write-downs significantly improved both financial and labor market outcomes despite not taking effect for three to five years. In sharp contrast, there were no positive effects of the more immediate payment reductions. These results run counter to the widespread view that financial distress is largely the result of short-run constraints."
In other words, it appears that empirical evidence supports debt relief, as opposed to temporary payments reductions. Irish banks and authorities, in continuing to insist on preferences for temporary relief measures are simply driven by pure self interest - protecting banks' balancesheets - not by a desire to deliver a common good, such as speedier recovery of the heavily indebted households.
Study link here: http://www.nber.org/papers/w23545.
Specifically, for debt relief: "For the highest-debt borrowers, the median debt write-down in the treatment group increased the probability of finishing a repayment program by 1.62 percentage points (11.89 percent) and decreased the probability of filing for bankruptcy by 1.33 percentage points (9.36 percent). The probability of having collections debt also decreased by 1.25 percentage points (3.19 percent) for these high-debt borrowers, while the probability of being employed increased by 1.66 percentage points (2.12 percent). The estimated effects of the debt write-downs for credit scores, earnings, and 401k contributions are smaller and not statistically significant. Taken together, however, our results indicate that there are significant benefits of debt relief targeting long-run debt overhang in our setting".
For repayment relief: "we find no positive effects of the minimum payment reductions targeting short-run liquidity constraints. There was no discernible effect of the payment reductions on completing the repayment program... The median payment reduction in the treatment group also increased the probability of filing for bankruptcy in this sample by a statistically insignificant 0.70 percentage points (6.76 percent) and increased the probability of having collections debt by a statistically significant 1.40 percentage points (3.56 percent). There are also no detectable positive effects of the payment reductions on credit scores, employment, earnings, or 401k contributions. In sum, there is no evidence that borrowers in our sample benefited from the minimum payment reductions, and even some evidence that borrowers seem to have been hurt by these reductions."
Why did payment relief not work? "The payments reductions increased the length of the repayment program in the treatment group by an average of four months and, as a result, increased the number of months where a treated borrower could be hit by an adverse shock that causes default (e.g., job loss)."
Now, imagine the Irish authorities arguing that no such shocks can impact over-indebted households over 10-20 years the repayment relief schemes, such as split mortgages or temporarily reduced repayments, are designed to operate.
IMF's Ms. Christine Lagarde statement on Greece: 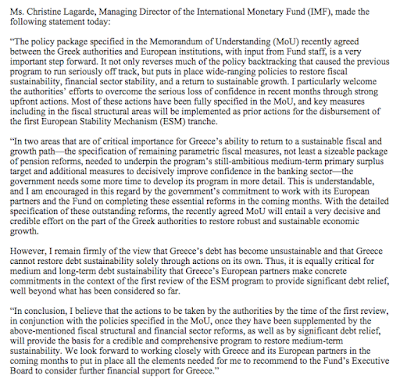 1) Per Lagarde, “of critical importance for Greece’s ability to return to a sustainable fiscal and growth path", "the specification of remaining parametric fiscal measures, not least a sizeable package of pension reforms, needed to underpin the program’s still-ambitious medium-term primary surplus target and additional measures to decisively improve confidence in the banking sector—the government needs some more time to develop its program in more detail." In other words, the path to Eurogroup's 3.5% long term primary surplus target on which everything (repeat - everything) as far as fiscal targets go, hinges is not yet specified in full. The Holy Grail is not in sight, yet...

2) "…I remain firmly of the view that Greece’s debt has become unsustainable and that Greece cannot restore debt sustainability solely through actions on its own. Thus, it is equally critical …that Greece’s European partners make concrete commitments in the context of the first review of the ESM program to provide significant debt relief, well beyond what has been considered so far." In simple terms, for all the lingo pouring out of the Eurogroup tonight, Greece has not been fixed, its debt remains unsustainable for now and the IMF - which ESM Regling said tonight will be expected to chip into the Bailout 3.0 later this autumn - is still unsatisfied with the programme.

"Significant debt relief" - off the table so far per Eurogroup - is still IMF's default setting.