It is a common meme amongst 'Westremlin' analysts on social media to attribute the massive fall in Russian Ruble over the last 15 months to the economic policy failure of Moscow, ignoring two simple facts: oil prices and free floating regime for the Ruble.

How much this ignorance is not a bliss? 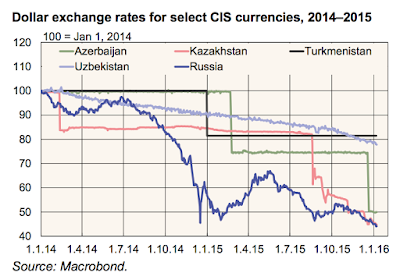 Unless your brain has been so solidly 'Westremlin'-ised by some poli-sci department from U.S.ofA, neither Kazakhstan, nor Azerbaijan are run from Moscow... oh an Uzbekistan is producing only 83K bpd of crude, NGPL and other liquids combined (Russia - roughly 11,400K Kazakhstan 1,691K and Azerbaijan roughly 865K).

On August 12, Kyrgyzstan became a member of the Eurasian Economic Union (EEU), joining Russia, Kazakhstan, Belarus and Armenia. Kyrgyzstan is the least developed of the EEU economies, relatively proximate only to Armenia in the group.