My guest post on the potential paths to unwinding monetary policies excesses by the Fed and ECB is available on FocusEconomics : http://www.focus-economics.com/blog/the-fed-ecb-at-a-crossroads-unwinding-qe.

The happiness and the unbearable sunshine of Spring is basking the monetary dreamland of the advanced economies... Based on the latest data, world's 'leading' Central Banks continue to prime the pump, flooding the carburetor of the global markets engine with more and more fuel.

According to data collated by Yardeni Research, total asset holdings of the major Central Banks (the Fed, the ECB, the BOJ, and PBOC) have grown in April (and, judging by the preliminary data, expanded further in May): 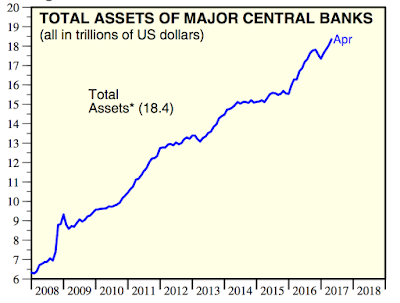 May and April dynamics have been driven by continued aggressive build up in asset purchases by the ECB, which now surpassed both the Fed and BOJ in size of its balancesheet. In the euro area case, current 'miracle growth' cycle requires over 50% more in monetary steroids to sustain than the previous gargantuan effort to correct for the eruption of the Global Financial Crisis. 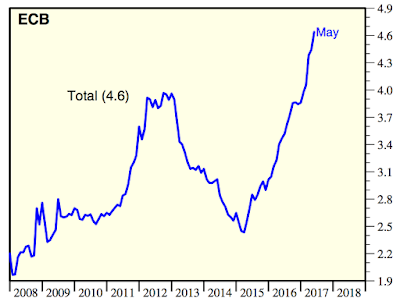 Meanwhile, the Fed has been holding the junkies on a steady supply of cash, having ramped its monetary easing earlier than the ECB and more aggressively. Still, despite the economy running on overheating (judging by official stats) jobs markets, the pride first of the Obama Administration and now of his successor, the Fed is yet to find its breath to tilt down: 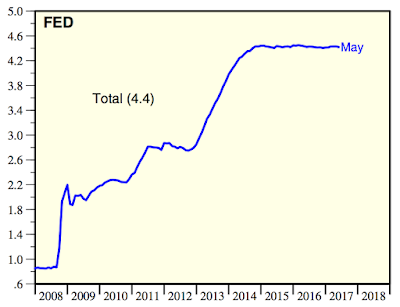 Which is clearly unlike the case of their Chinese counterparts who are deploying creative monetarism to paint numbers-by-abstraction picture of its balancesheet. 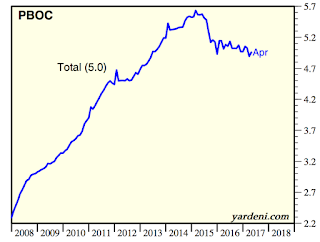 To sustain the dip in its assets held line, PBOC has cut rates and dramatically reduced reserve ratio for banks. 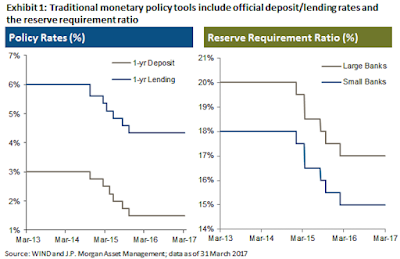 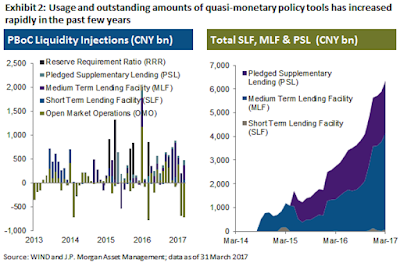 All in, PBOC certainly pushed some pain into the markets in recent months, but that pain is far less than the assets account dynamics suggest.

Unlike PBOC, BOJ can't figure out whether to shock the worlds Numero Uno monetary opioid addict (Japan's economy) or to appease. Tokyo re-primed its monetary pump in April and took a little of a knock down in May. Still, the most indebted economy in the advanced world still needs its Central Bank to afford its own borrowing. Which is to say, it still needs to drain future generations' resources to pay for today's retirees. 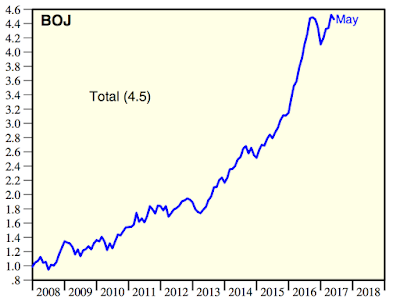 So here is the final snapshot of the 'dreamland' of global recovery: 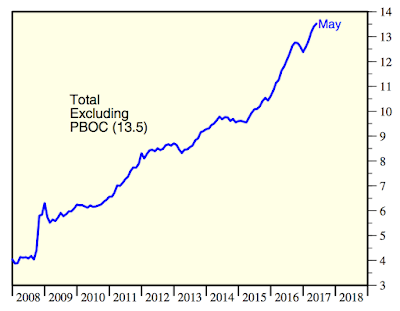 As the chart above shows, dealing with the Global Financial Crisis (2008-2010) was cheaper, when it comes to monetary policy exertions, than dealing with the Global Recovery (2011-2013). But the Great 'Austerity' from 2014-on really made the Central Bankers' day: as Government debt across advanced economies rose, the financial markets gobbled up the surplus liquidity supplied by the Central Banks. And for all the money pumped into the bond and stock markets, for all the cash dumped into real estate and alternatives, for all the record-breaking art sales and wine auctions that this Recovery required, there is still no pulling the plug out of the monetary excesses bath.

There is much talk around two matters relating to the monetary policy expectations:

Except, of course, the second point is... err... questionable. For all the estimates of percentage points of growth uplifts and unemployment reductions delivered by the Fed-linked economics analysts, there are two simple facts stubbornly persisting out there:
Fact 1: U.S. (and European, and Japanese, and global) growth since the end of the Great Recession has been much slower than historical records for recoveries suggest; and
Fact 2: Fact 1 comes on foot of a historically unprecedented monetary expansions, that are, by far, not over yet.
Here are two charts on the second fact: 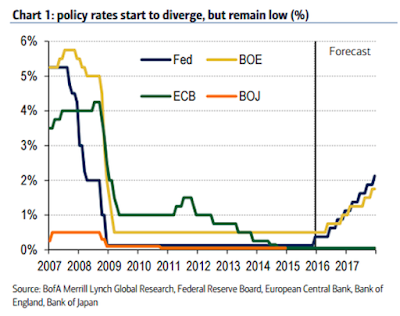 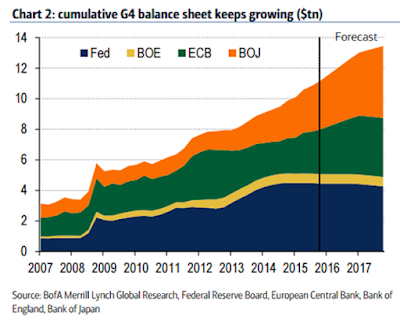 Now, observe: as of today, Big 4 CB balancesheets expanded almost 4-fold. By the end of 2017 (per BAML), projected balancesheets are expected to rise even further, by more than 4.5-fold. Both BOJ and ECB will be leading this latter stage of monetary easing - the two economies that are by far fairing the worst throughout the crisis, despite the fact that whilst the ECB adopted a more conservative stand in the earlier stages of the crisis, BOJ raced ahead of everyone else with Abenomics arrival.
In other words, since 2012 through 2015, CB balancesheets grew by more than 50 percent. Meanwhile, what happened to growth rates and growth expectations? 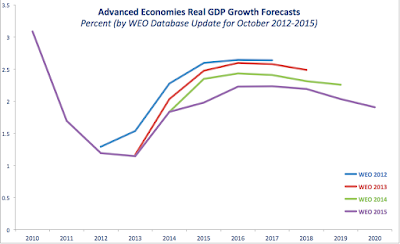 Which, sort of, suggests that all this 'normalisation' of growth under the monetary policies activism is... well... imaginary?..
Having been out of contact due to work and summer break commitments, I will be updating the blog over the next few days with interesting bits of information that have been overlooked over the last 10 days or so. So stay tuned for numerous updates. 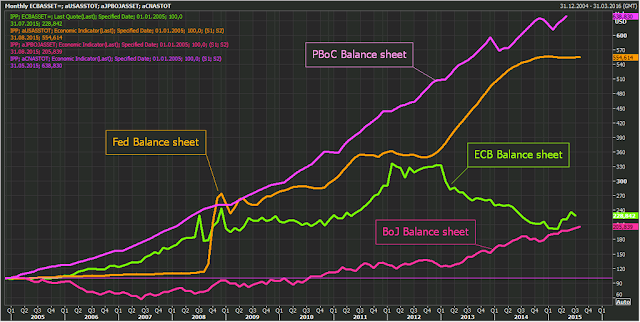