The EU27 have a new 'deal'. This time, on revamping the block's migration strategies in the face of continued relentless wave of refugees fleeing to Europe from Syria and North Africa, propelled or aided to take desperate actions by the regime change doctrine of Washington. Migration numbers are down roughly 90 percent from their peak in 2015, and fell 45 percent y/y in the first half of 2018. But, voter revolt against the system that is perceived as "open borders" is still fuelling rise in political opportunism and extremism across Europe. The latest catalysts for the negotiations have been: (1) the rise of anti-immigrant parties in Germany that now threatens the uneasy governing coalition in Berlin, and (2) the arrival to power of the new, anti-immigration coalition in Italy. To be more precise, Italian Government has been asking for the EU to take "concrete steps" to share burden of accepting refugees with Italy for some time now. Other  catalysts have been governments of Hungary and the Czech Republic, where current political leadership has been opposing the EU policy of imposing automatic quotas for accepting migrants.

Earlier today, following almost nine hours of negotiations, the EU27 finally hammered out a compromise deal, immediately labeled in the media as 'political fudge' - something the EU has been very skilled at achieving for a good part of the last 20 years.

To prevent Italy from exercising a veto on the deal, the EU agreed to redistribute arriving migrants away from the country of their original landing to "control centres" spread across the EU. Centres locations are to be specified later. "Control centres", funded out of unspecified funds, but presumably payable by the joint resources of the EU, will de facto trade 'local jobs and euros' for communities accepting large scale migrants detention centres. This model works well with military bases and jails, and can be attractive to some poorer Eastern European countries, as well as countries like Greece and Italy. The key to this is that the detention centres will only be located in countries that volunteer to accept them. In simple terms, immigration policy is now a part of fiscal redistribution scheme, just what Italy wanted.

"Control centres" will function as a triage point, with “rapid and secure processing” separating economic migrants from those with a potentially legitimate claim to the asylum. Thereafter, successfully pre-screened asylum seekers will be distributed under the principle of solidarity (quotas), although, in a bow to Czech and Hungarian governments, solidarity principle will apparently be voluntary too. In other words, "rapid" processing will likely end up being a 'lengthy detention' in "control centres", as many Governments will simply refuse to take in asylum seekers, while other Governments will end up being swamped with applicants.

To restrict the numbers of those reaching the EU borders in the first place, the EU meeting agreed to provide more funds for Turkey and Morocco to act as buffers for refugees. Algeria, Egypt, Libya, Morocco, Niger and Tunisia are to get funding for setting up 'processing centres'. Or, put differently, the EU will be paying more to warehouse migrants offshore, something that is likely to lead to lengthy detention in questionable conditions.

As a support for embattled Angela Merkel, the agreement also states that the nation states can “take all necessary internal legislative and administrative measures” to stop refugees and migrants crossing Europe’s internal borders. Whatever this means for the Schengen agreement and borderless travel, time will tell.


My view: The migration agreement is nothing more than another kick to the proverbial can that was stuck in the cracks on the proverbial road toward addressing the migration crisis. It fails to address actual modalities of asylum process, the key being the length of the process, lack of alternatives to highly costly and questionable (in ethical and even international law terms) deportations of failed seekers, and the lack of clarity of rules and resources for allocating successful asylum seekers. It also failed in effectively dealing with migrants inflows: a 'buffer zone' on the southern shores of the Mediterranean simply increases costs of making the crossing, and thus increases the risk of crossing to migrants. It does not remove the incentives for making the journey. In the case of Libya and Egypt, there are questions about these states' capacity actually control their borders, primarily arising from the nature of the Government regimes in both countries. In case of Syria, ability to seal off inflows of refugees from the country hinges on stabilisation of the Assad regime, as no other participant in the Syrian civil war has any interest in controlling Syria's Mediterranean coast. In effect, the EU agreement does not tackle the main issue at hand: how to reduce the inflows of both economic migrants and refugees into Europe. Likewise, the EU agreement does not even touch upon the need to structure effective measures (legal and institutional) to improve integration of the successful migrants into the European societies.
In short, we will be back to this issue soon. Mark my words.
Having looked in the previous post at top level data for population changes in Ireland reported by CSO, now let's take a look at composition of migrants flows by nationality. This is going to be charts-heavy. 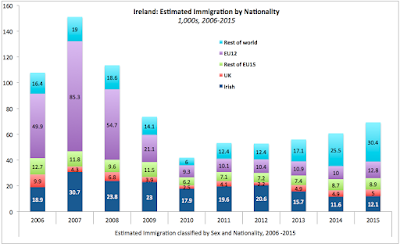 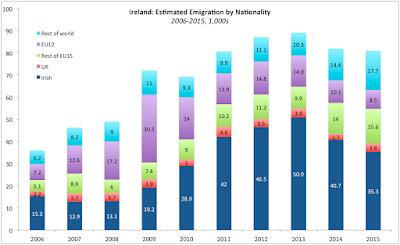 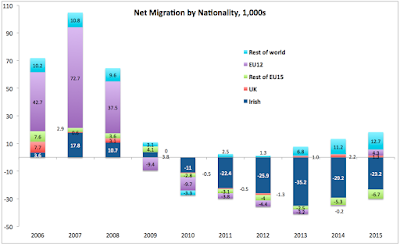 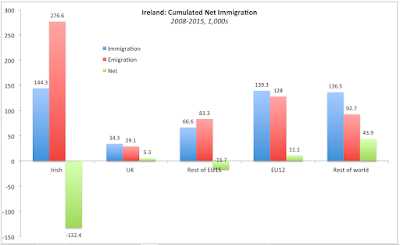