As you know I rarely post on the U.S. economy. But recently I was updating a presentation involving the state of financial flows for retail investors and savers around the world and had to check up on my old chart that I labeled America's Scariest Chart Redux (see previous update here).

Keep in mind the dominant media meme: the U.S. economy has been growing at a robust rate and the Great Recession has been officially over now for 74 months.

So where does the current unemployment duration (in terms of average duration in weeks) stand? 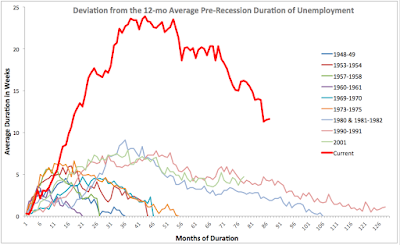 Worse, we are now (still) in a situation where people on unemployment benefits are staying in unemployment longer, on average, than in any other recession on record.

Now, let's revisit the 'official' former Scariest Chart - the index of employment also plotted by each recessionary period. This chart used to be published regularly, but since end of March 2014, U.S. employment index has finally reached pre-crisis levels of employment and everyone forgot the said chart. Too bad. Here it is, updated to the latest data: 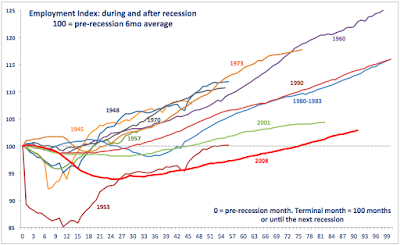 And guess what? The chart above clearly shows that the current period of 'recovery' is still the worst in terms of employment performance than any previous recovery on record.