New home sale prices have reached record highs. Fueled by strong demand, you would think homebuilders are making record amounts of cash with home prices at their highest-ever levels.

So it might be surprising to learn the market capitalization of new homes sold in the U.S. peaked in December 2020, falling in the months since according to the latest updated data. 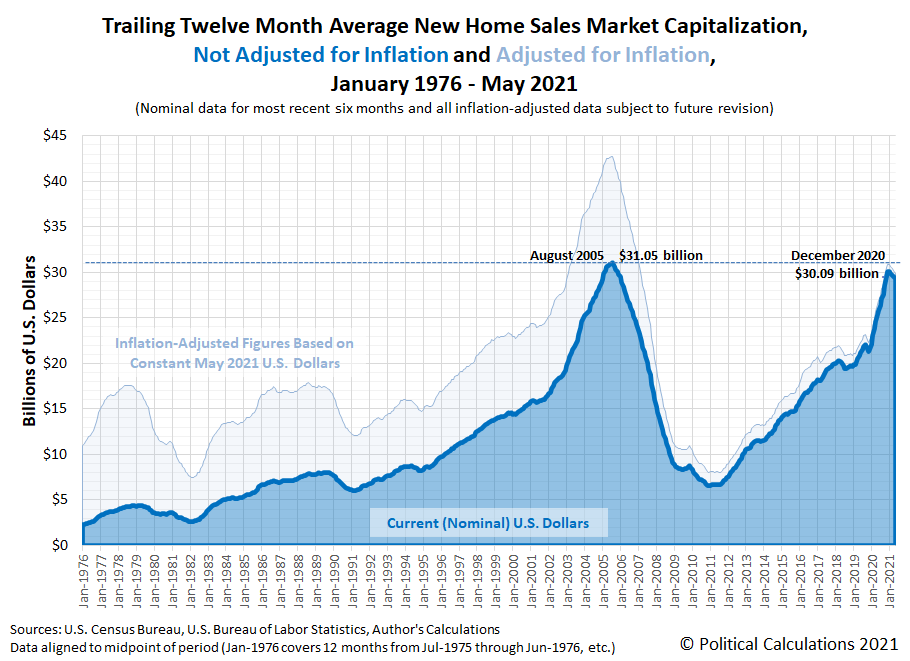 New home sales have been negatively impacted by a decline in home construction, which saw its biggest dip since the pandemic hit in May 2021:

Despite a historic shortage of homes for sale, homebuilders are actually slowing production, handcuffed by skyrocketing commodity prices and shortages of land and skilled labor.

Single-family housing starts dropped more than 13% in April compared with March, the U.S. Census reported Tuesday. That’s the sharpest decrease since last April, when the pandemic shut down the economy.

“I have to blame the difficulty in procuring lumber and other products, along with labor issues for the miss, in addition to likely cancellations due to skyrocketing costs for single family starts,” said Peter Boockvar, chief investment officer at Bleakley Advisory Group.

The rising prices homebuilders are having to pay for raw materials are being directly transferred to new home buyers:

Prices new and existing homes are at record levels, and the increases are accelerating at the fastest clip in over 15 years. Nearly half of all builders say they are adding escalation clauses to their sale prices because of rising material costs, according to a recent survey from the National Association of Home Builders.

“Escalation clauses specify that if building materials increase, by a certain percentage for example, the customer would be responsible for paying the higher cost. Including such a clause allows all parties to be on notice that the contract costs could change if materials prices change due to supply constraints outside the builder’s control,” according to a recent NAHB post.

Looking forward, lumber prices have peaked and have begun to fall as the available supply has begun to increase. Prices however are expected to remain at levels double their historical average for years to come according to an industry observer, meaning higher new home prices will be with us for some time to come.

For homebuilders, that positive development will be confirmed when the market cap for new home sales in the U.S. begins to rise, reversing its current trend. 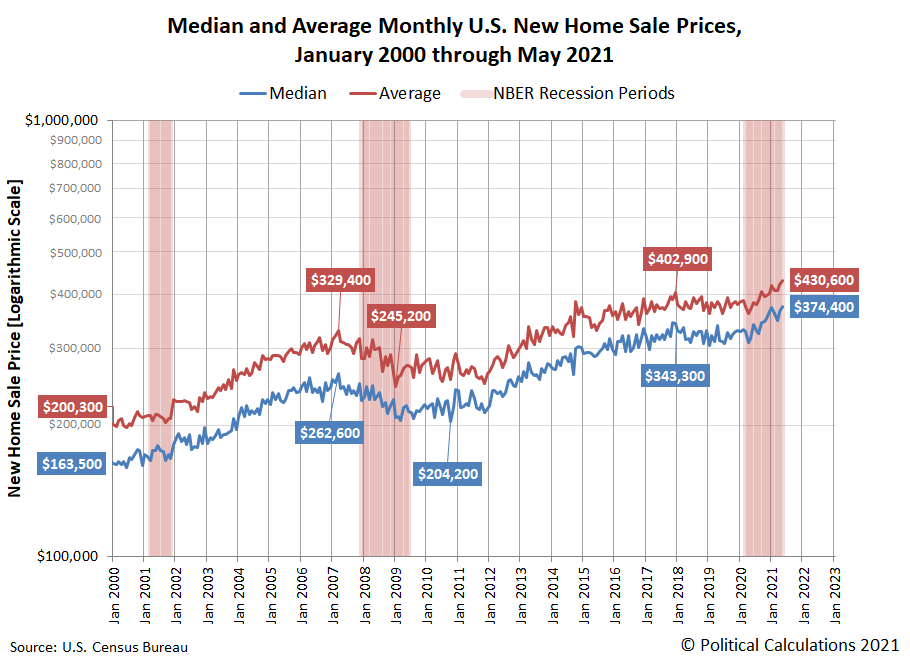 Bill McBride describes the exceptional year-over-year change in these prices:

In terms of relative affordability however, we do have some good news to report. Although new home prices continued to rise, May 2021 saw median household income in the U.S. rise outside the very narrow range in which it fell in the preceding year from April 2020 thorugh April 2021. 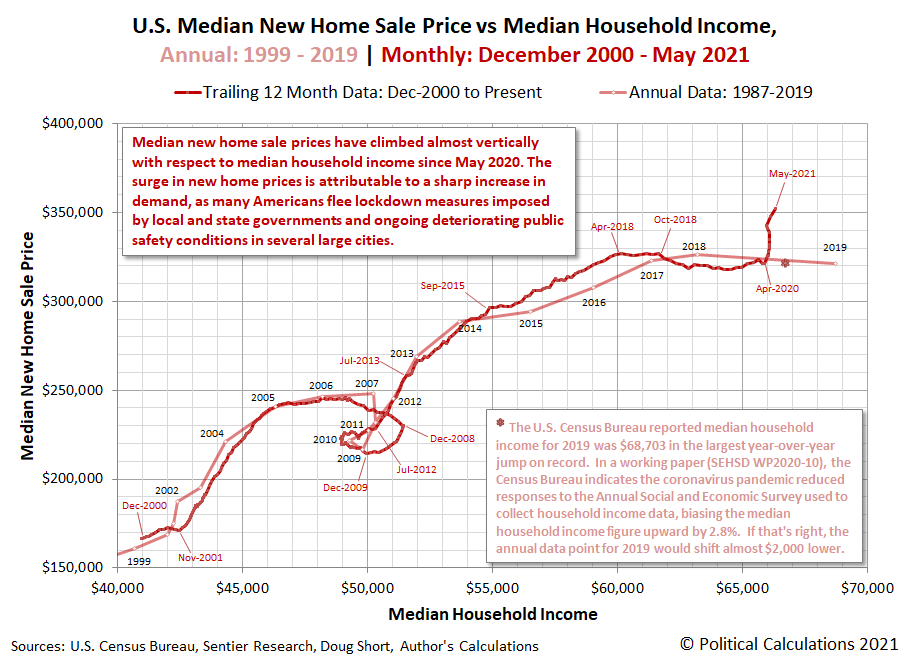 Although the rising prices of new homes means their relative affordability continued to fall in May 2021, the increase in median household income means the rate at which new homes are becoming less affordable began to slow. 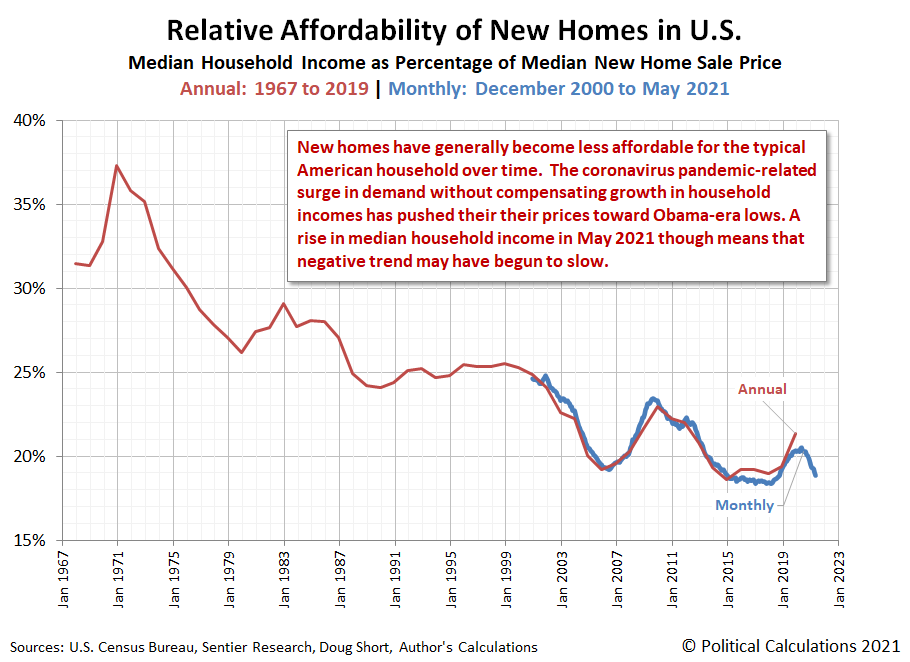 We'll officially release our estimate of median household income for May 2021 on 1 July 2021.

We can see that trend in the latest update to our chart tracking the ratio of the trailing twelve month averages of median new home sale prices to median household income. Through April 2021's preliminary estimates, we find the typical new home sold in the U.S. now costs 5.24 times the typical household income. 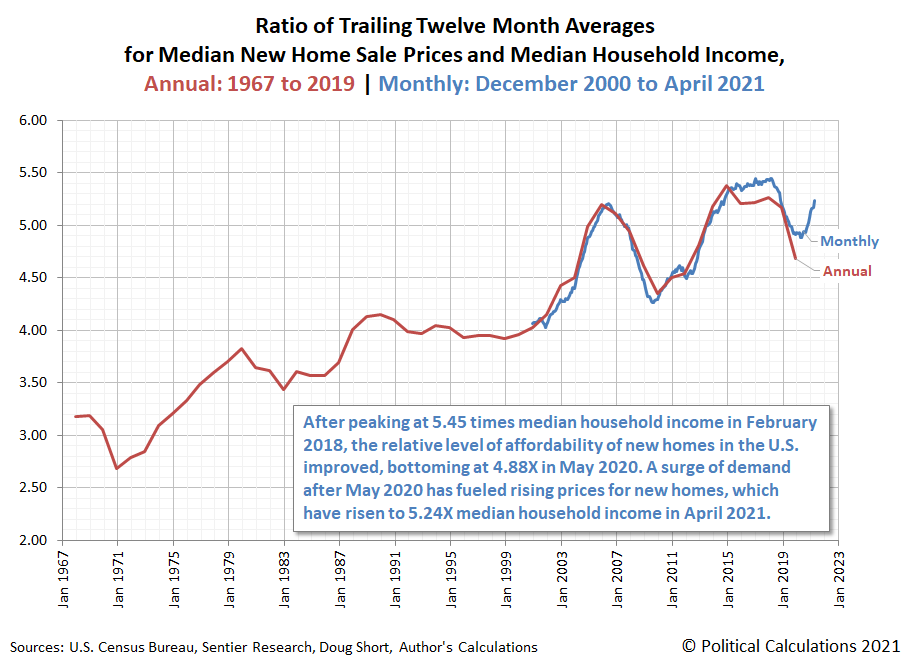 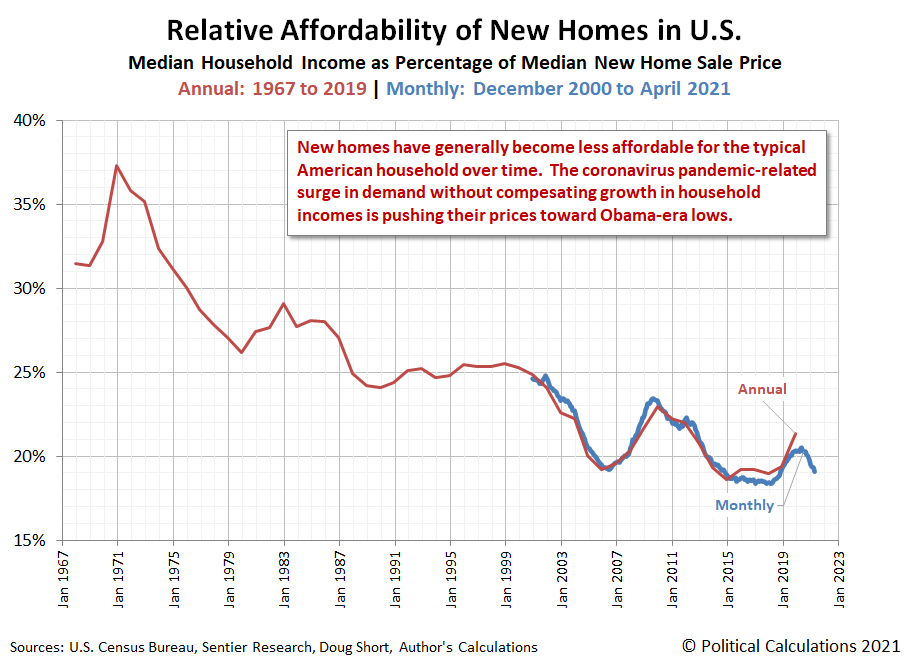 Mathematically, the chart simply expresses the inverse of the data indicated in our chart showing the ratio of median new home sale prices to median household income as a percentage.

Since 1971, we find the relative affordability of new homes sold in the U.S. have been generally falling over time, which has periodically been punctated by short term periods where either fell faster than median household income, such as during the housing bust of 2006-2009, or when median household incomes rose much faster than new home prices, as in the period from late 2017 to early 2020.

The latest short term downtrend coincides with rapidly escalating prices combined with stagnant income growth. That combination is contributing to the fastest decline in the relative affordability of new homes recorded during the 21st century.

Average new home sale prices are continuing to set new record highs. Initial estimates for April 2021 indicate they have reached $435,400, which is up nearly 5% from February 2021's initial estimate of $416,000. 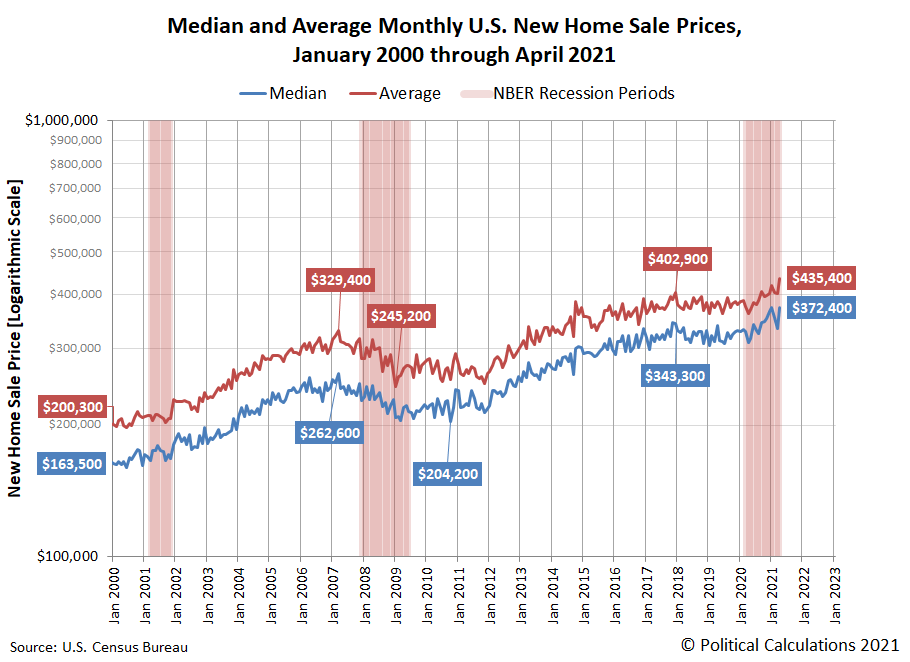 The price escalation of new homes in the United States continues to be unprecedented, which is driven home when we show the relationship for median new home prices with respect to median household income. 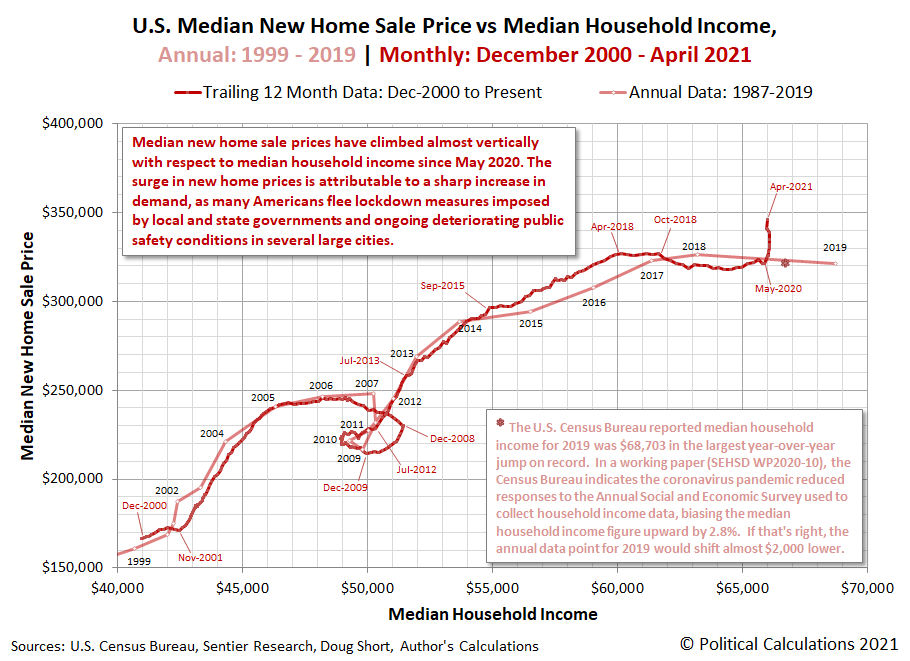 The next chart shows all the available historial data for these figures going back to 1967. 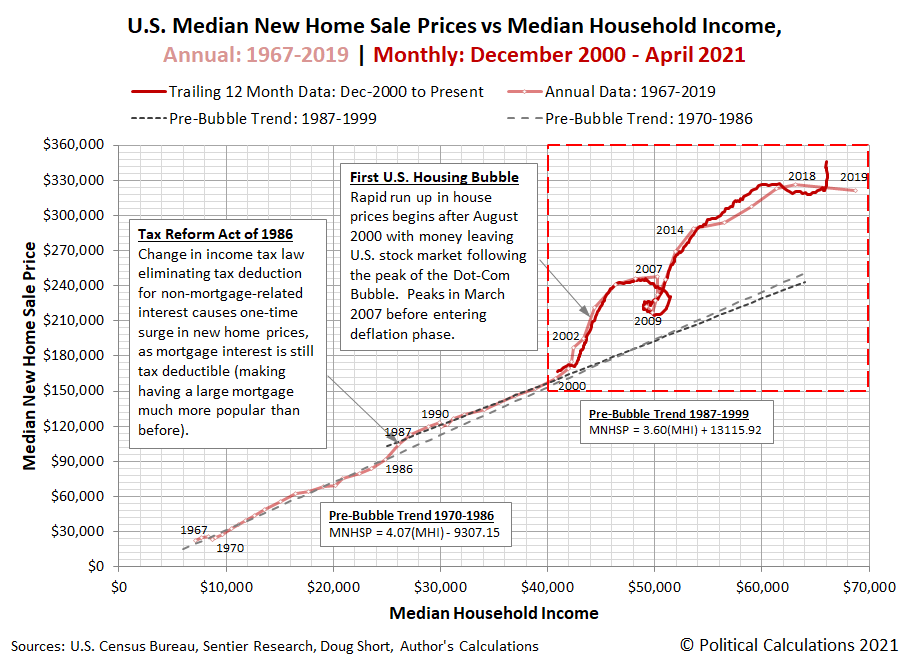 The past year from April 2020 through April 2021 really is unprecedented.

If you've been paying attention to home prices, this isn't news, but new homes are becoming less affordable for the typical American household.

In March 2020, the price of the typical new home sold in the U.S. rose to be 5.14 times the typical income of an American household. 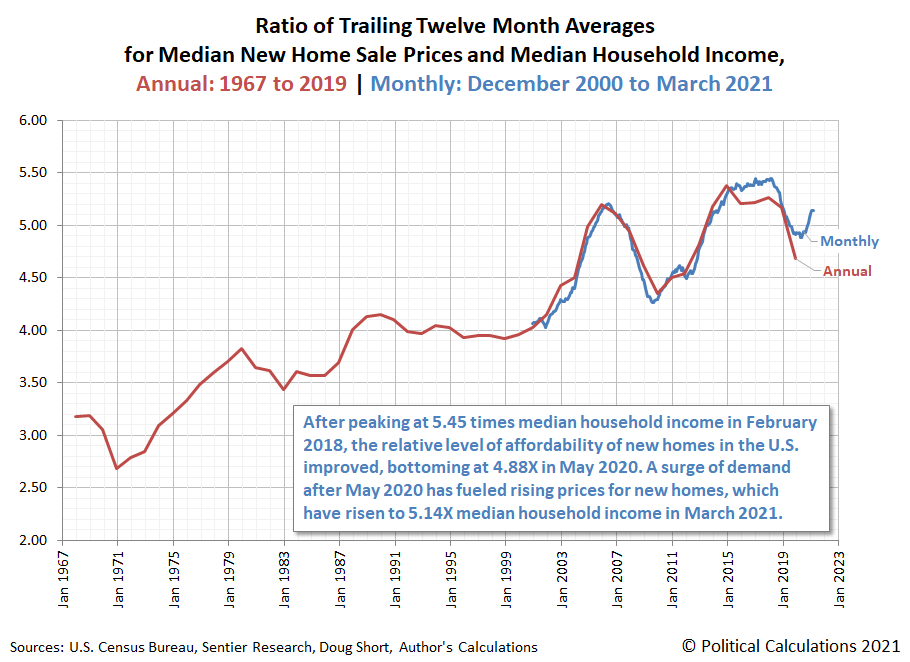 Historically, there have been two periods where new homes have been more unaffordable with respect to median household income. The first was at the peak of the housing bubble in 2006. The second is the period from 2014 through 2018.

We anticipate the rise in the relative affordability ratio will decelerate because the supply of new homes being sold in the U.S. is rising rapidly, with the overall number now at levels last seen during the early part of the Dot-Com Bubble. 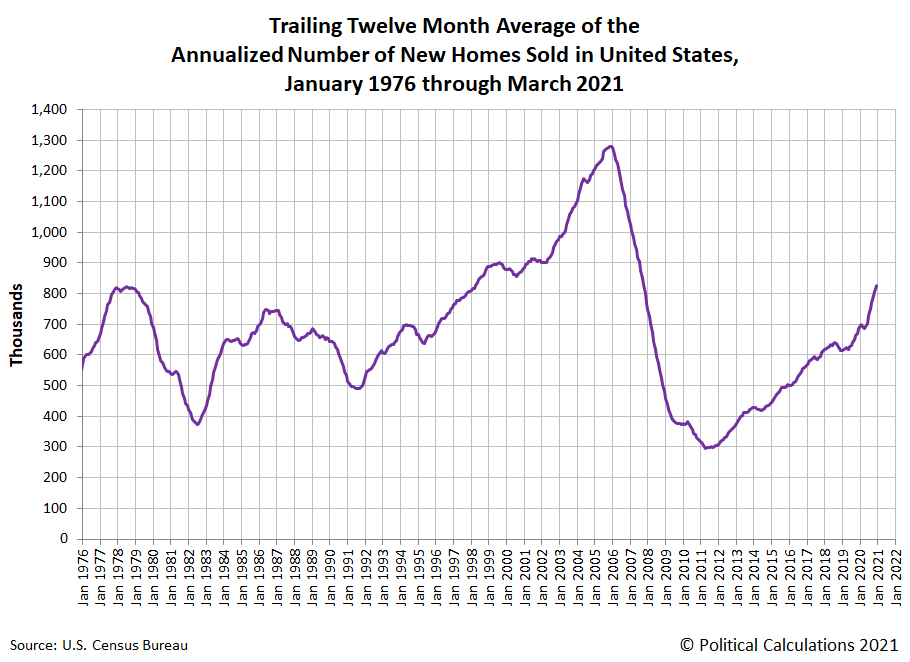 With the rising supply, median new home sale prices have declined since peaking in December 2020, though there is still momentum behind the increase in unaffordability for now.