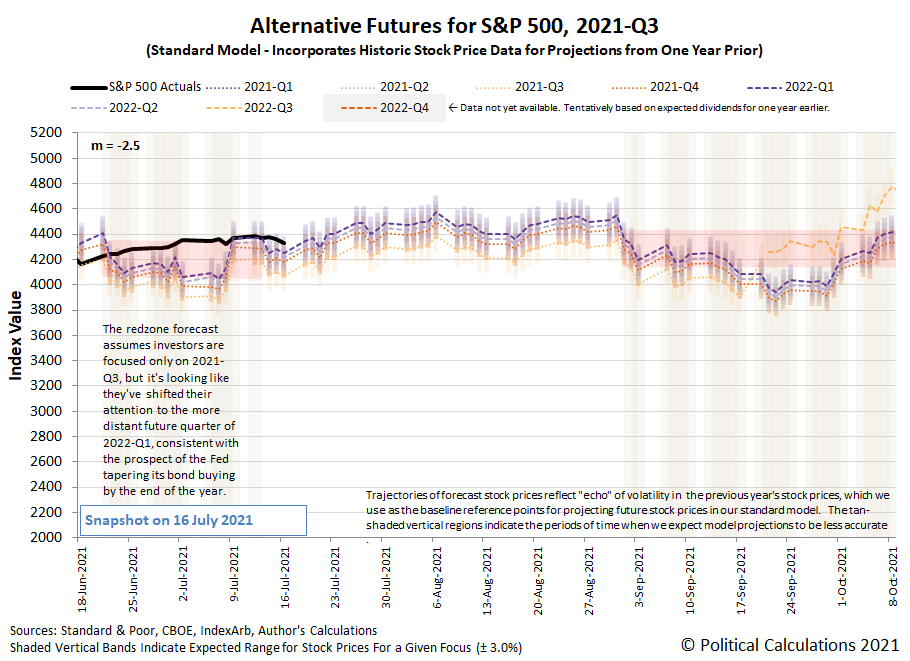 While the model looks forward to a sideways to slowing rising run over the next several weeks if investors keep their focus on 2022-Q1, it also indicates the risk of a 5% decline should investors have reason to shift their attention back to the current quarter of 2021-Q3.

Whether that happens will depend much on what happens with the outlook for inflation in the U.S. economy, which continues to play an outsized role in the news influencing investors' expectations.

Looking for additional markets and economics news? Check out Abnormal Returns, in which Tadas Viskanta provides a daily roundup of links to interesting news and analysis.

The S&P 500 (Index: SPX) broke its seven day winning streak to start the week and though it wavered, it closed the Fourth of July holiday-shortened week at a new high.

In doing that, it confirmed our observation that investors have shifted their forward-looking attention to the more distant future quarter of 2022-Q1. We see that confirmation as the redzone forecast ranges reached its end, with the level of the index coinciding with where the dividend futures-based model indicates it would be if investors fixed their sights on that more distant future quarter. 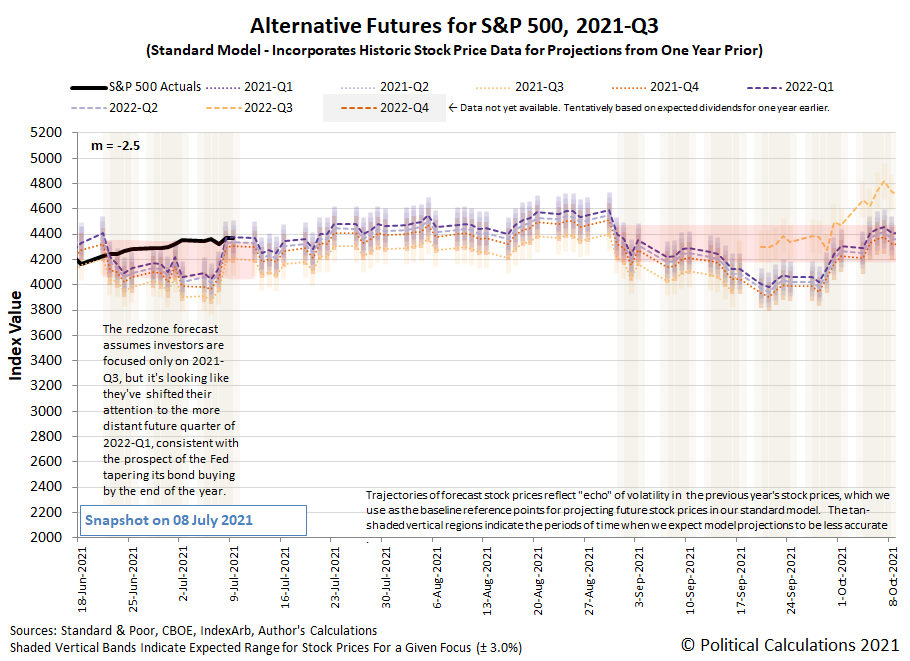 The news of the week didn't do much to alter that apparent shift in investor outlook. Here are the headlines we flagged for their market-moving potential during the week that was.

Looking for another summary of market news? Try MarketWatch's Market Snapshot, which provides a daily summary of the news that influenced investors.

What's the connection between a dripping faucet, the Mandelbrot Set, a population of rabbits, thermal convection in a fluid, and the firing of neurons in your brain?

That's the lead question asked in the following under-19 minute video by Veritasium exploring the logistic map, in which very complex and chaotic outcomes follow from very seemingly simple math relationships.

If you'd like to play around with the logistic map for modeling the population of rabbits over time, using the equation:

We've built a simple tool to make it easier to cycle through the outputs for whatever parameter values you choose to enter. If you're reading this article on a site that republishes our RSS news feed, please click here to access a working version of this tool our site.

For added fun, we'll note that bifurcated behavior has also been observed in stock prices. A 2014 paper by David Nawrocki and Tonis Vaga describes that scenario:

We propose a bifurcation model of market returns to describe transitions between an 'over-reaction' mean regressive state and 'under-reaction' trend persistent states. Since July 1929, the Dow Jones Industrial Average has exhibited non-stationary state transition behavior, including: (1) mean regressive behavior during crisis situations during the Great Depression of the 1930s and again in the crisis of 2008 when the availability of credit was interrupted; (2) strongly bifurcated, or trend persistent behavior from the 1940s through 1975; and (3) more efficient behavior since 1975. The bifurcation dynamic evident in the pre-1975 era is somewhat enhanced by conditional volume and moderate volatility. The bifurcation model is used to develop a quantitative measure of the degree of market efficiency, which indicates that the market has become more efficient, i.e. less trend persistent, since 1975 with the advent of negotiated commissions and computerized trading techniques. Similar findings are presented for the S&P 500 index and the CRSP Value Weighted Index, which represent large capitalization markets.

There's also a 2016 paper by Marzena Kozlowska et al. that points to the "flickering" behavior in stock prices as an early warning signal when the market nears a "bifurcated catastrophic transition", or "tipping point".

We came across both these papers while investigating potential explanations for why long winning streaks and especially why long losing streaks have become less frequent over time. One thing led to another and suddenly we were immersed in the math of rabbit population growth and Mandelbrot sets, which is pretty interesting in and of itself.

Welcome to the world of complexity!...

The S&P 500 (Index: SPX) roared to new record highs, closing the trading week at 4,352.34, having closed higher on each of its last seven trading days.

The alternative futures chart shows the trajectory of the index rising to the top end of the latest redzone forecast range: 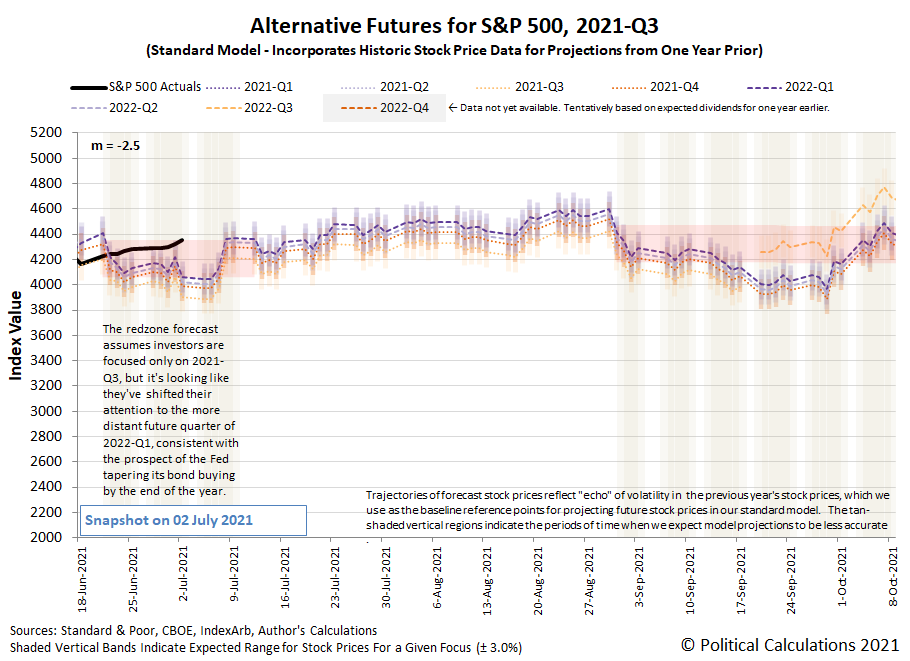 The redzone forecast assumes investors would focus on 2021-Q3 in setting current day stock prices, but that may have changed during the past week, thanks to the continuing efforts of Federal Reserve officials to set expectations they will not hike rates until late 2023 to respond to inflation, which they continue to claim is transitory.

Instead, the economic data is such that Fed officials are instead signalling they will begin tapering their stimulus bond buys at the end of 2021, which we think may have prompted investors to shift their forward looking attention outward to the more distant future quarter of 2022-Q1.

When we refer to future quarters, we're referring to the periods covered by dividend futures contracts, which do not follow calendar quarters. For example, 2021-Q4 will end when its dividend futures contract expires on the third Friday of December 2021, or rather, on 17 December 2021. The Federal Reserve's Federal Open Market Committee's final meeting of the year will occur earlier that week, where any action they choose to take would begin just as 2021-Q4 ends, which is why investors would focus on 2022-Q1.

Our thinking is paced in part by the market moving headlines of the week that was, where you can see the efforts of the Fed's minions to set future expectations:

The next week will be interesting because of the S&P 500's current streak of consecutive higher daily closes. We'll find out how close it might get to a new record in that category as well!

The Fed's minions hit the news streams hard this past week, with most selling the message that the surge of inflation is mostly transitory and won't require the Fed to start boosting U.S. short term interest rates before 2024. That message seemed to take hold among investors, with the S&P 500 (Index: SPX) returning to record high levels on the expectation that outlook will hold. At least for now.

In the meantime, we find the trajectory of the S&P 500 falling well within the range of the latest redzone forecast in the alternative futures chart, which is based on the assumption investors will mostly focus on the upcoming quarter of 2021-Q3 over the next several weeks. 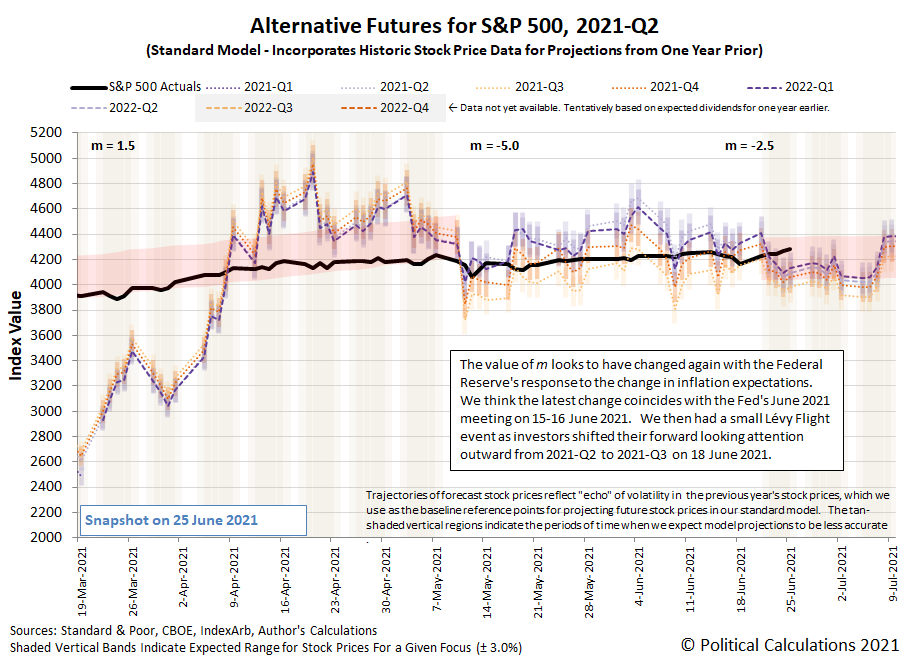 We weren't kidding when we said the Fed's minions were out in force in front of the news media during the past week. Their outsized role in an otherwise slow news week is really apparent in our roundup of market-moving news headlines:

Looking for more news? With Barry Ritholtz' weekly summary still on vacation, you might consider tapping Bloomberg's RSS business news feed to get a bigger picture than what we've focused upon in this edition!