How has the cumulative distribution of income in the United States changed over the last six years?

Since the U.S. Census Bureau published its income distribution data for American individuals, households, and families for the 2019 calendar year on 15 September 2020, we thought it would be interesting to show how the distributions for each of these subgroups of the nation's population has changed over time. To do that, we've put together several animated charts to show the evolution of the distribution of income in the U.S. from 2014 through 2019.

If you're reading this article on a site that republishes our RSS news feed, you may want to click through to the original version of this article at our site to see the animations in action.

Here is the animated chart showing the shifting distribution of total money income for individual Americans:

Next, let's look at the animated chart for the total money income distribution of American households:

The U.S. Census Bureau distinguishes families from households by recognizing that families are made up of individuals who live together that are related to each other by birth, marriage, or adoption. Households may consist of people who either are related or that are not related as a family.

Each of the animated charts show the distribution of nominal cumulative total money income for American individuals, households, or families, which have not been adjusted for inflation. For each of these groupings, the animations show the distribution of income in the U.S. shifting toward the right, with Americans' incomes rising over time. The rate of increase has accelerated considerably in the most recent years, although we should note that the data for 2019 was collected in early March 2020, before any negative impacts from the Coronavirus Recession would be observed.

In 1800, 90% of the world's population lived in extreme poverty. In 2019, 10% did. During this 220 year span, 80% of the population of Earth rose out of extreme poverty. Which you can watch happen in the following short video animation of Gapminder's year-by-year global income distribution data.

Regions are grouped by color - red for Asia, blue for Africa, green for the Americas and yellow for Europe (which includes Russia). You can drill down to country-specific data using Gapminder's income mountain data visualization tool, where you can unstack the data to better follow a particular region, or just one country in particular.

We found some surprising results:

Of course, watching the short video we threw together is no substitute for playing with the income mountain tool, or any of the other fascinating tools available at Gapminder!

As part of its biennial Point-In-Time count of its homeless residents, the city of San Francisco asks roughly one eighth of its homeless population what factors were the primary cause of their homelessness. The city's 2019 report provides their responses to that question from its point in time counts from 2015, 2017, and 2019, which we've visualized in the following chart. 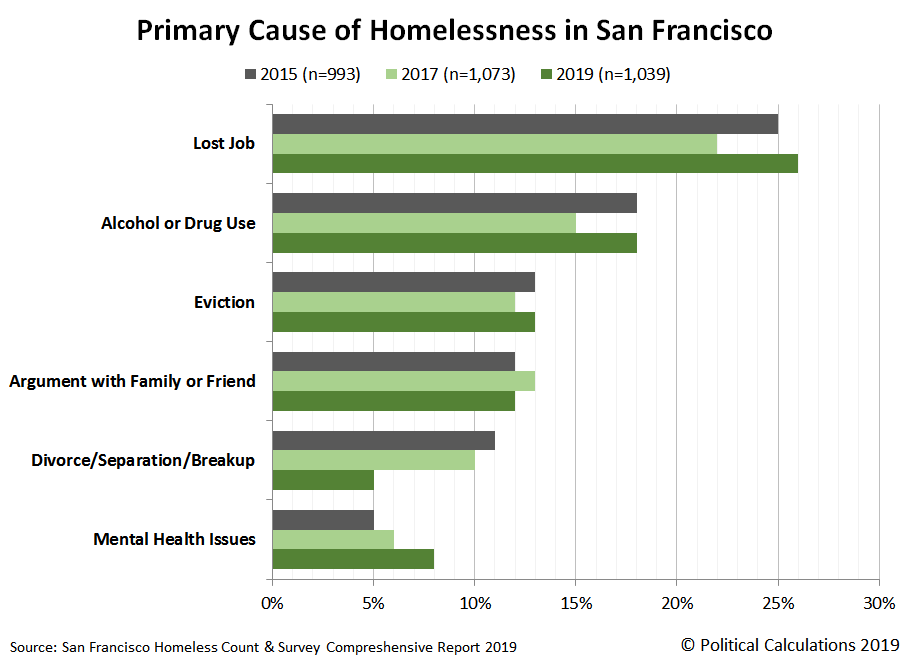 From January 2015 through January 2019, the loss of a job represents the top response, with approximately a quarter of all surveyed homeless residents indicating that single response [1].

During these years, San Francisco's unemployment rate has fallen from 4.1% in January 2015 to 3.4% in January 2017 to 2.6% in January 2019. By itself, the city's falling unemployment rate suggests that job loss should be declining as the primary cause of homelessness because employers would be increasingly reluctant to either fire or lay off employees in such a tightening job market. Logically, since job loss is the number one cause of homelessness identified by San Francisco's homeless residents for their condition, the number of homeless in the city should also be falling.

It would be helpful to find out more about what kinds of jobs San Francisco's homeless residents held before they lost them, leading to their becoming homeless. Unfortunately, the survey doesn't provide that specific kind of insight, but it does provide information about the incomes earned by the portion of the city's homeless residents who are employed, who account for about 12% of the surveyed homeless population.

Assuming the jobs of the working homeless provide similar levels of income as the jobs that many homeless San Franciscans held before they lost them and became homeless, this data may tell us about their earning potential. In the following chart, we've constructed the cumulative distribution of income for San Francisco's employed homeless residents, where we find that roughly 85% earn far below the annual income that might be earned by working full time at the city's statutory minimum wage. 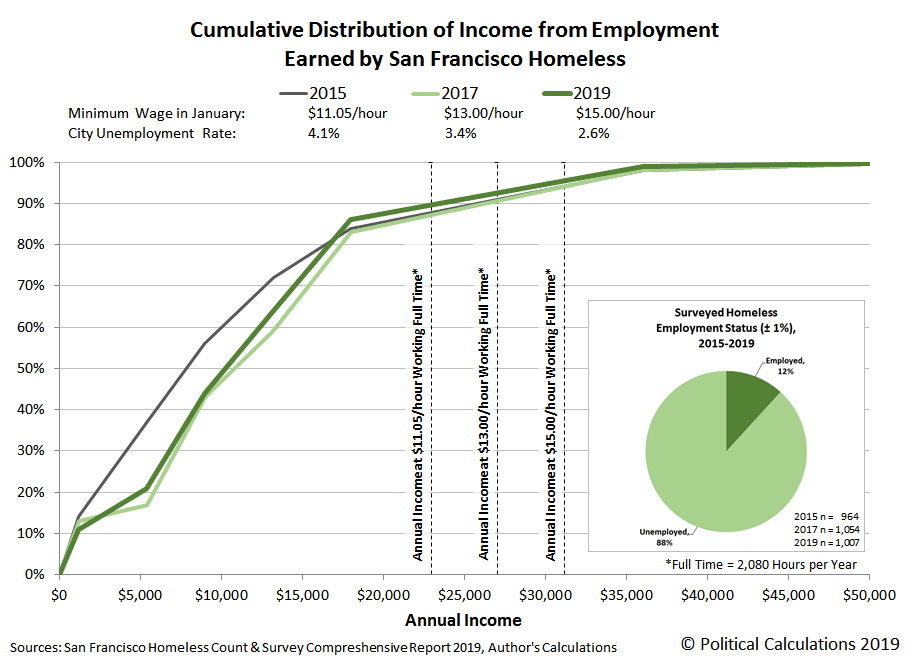 
With a falling unemployment rate and a rising minimum wage, we should see the cumulative distribution of income earned by working homeless San Franciscans shift to the right in each year. But we only see that from 2015 to 2017 in the chart above, and only for equivalent annual incomes between $1,200 and $18,000, where we find no meaningful shift for incomes above that level, nor do we see any significant change over all incomes from 2017 to 2019.

Since San Francisco imposes a statutory minimum wage, we can estimate how many hours the city's employed homeless are working at their jobs. The following chart maintains the cumulative distribution of income on the vertical axis, replacing the annual incomes in the horizontal axis with the equivalent hours worked at the city's mandated minimum wage. 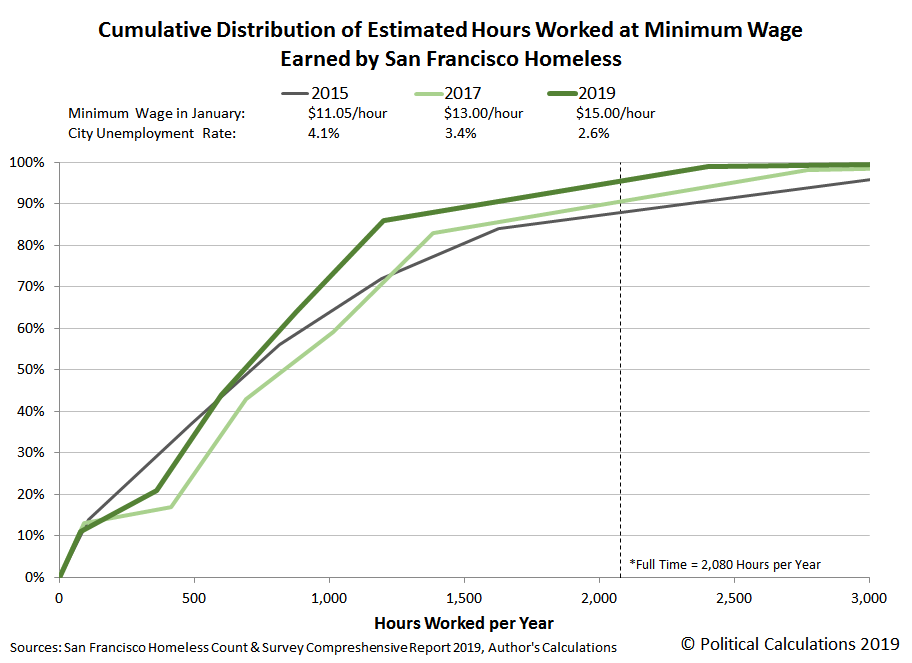 This chart is a little more telling. Even at minimum wage, we find that over 85% of the city's employed homeless work less than full time year round, which we define as 40 hours per week, 52 weeks per year, or 2,080 hours per year. Only working part time at minimum wages would severely limit their ability to earn incomes sufficient to avoid being homeless [3].

Above the median 50% mark, we see hours worked decline from year to year, even though the city's unemployment rate falls and as the city's minimum wage rises. Combined with the income distribution data, this pattern suggests that the rising minimum wage either enables the homeless persons to choose to work less while earning similar levels of income or that their employers are unable to provide as many hours for them to work at the higher minimum wage, limiting any benefit they might obtain from an increased minimum wage.

It would be really interesting to analyze a more detailed breakdown of the earned income data for San Francisco's homeless as well as more information about their employers and employment.

[1] The survey allows for multiple responses to be recorded for the question. The report lists only the top responses given by the surveyed population.

[2] San Francisco's biennial point-in-time counts of its homeless population took place during January 2015, January 2017, and January 2019. The indicated minimum wages are those that applied in these months.

[3] Among the surveyed population, only 1-2 individuals per year who were counted as homeless earned annual incomes that would place them above the threshold that coincides with working full time, year round at the city's statutory minimum wage rates. That's makes for quite a lot of income inequality among San Francisco's homeless!

Net wealth is looking like it will be a hot topic in the upcoming 2020 election season in the United States, with several candidates proposing to tax high net worth households to only partially pay for the explosion in federal government spending they are also proposing.

How at risk are you might be to these newly proposed taxes on wealth depends on what your household's net worth is and how your rank in net worth among all Americans. To help answer the first part of that question, we'll direct you to Bankrate's Net Worth Calculator, which will add up the value of your assets and subtract out your liabilities to estimate your household's net worth, assuming you haven't already done that math.

After you have that figure, plug it into the following tool, where we'll estimate your household's percentile ranking among all U.S. households, based on data for 2016 that was recently published by the U.S. Census Bureau. Hopefully, you'll be entering a positive number, but if not, our tool can handle if your household is underwater and you have to enter a negative value. If you're reading this article on a site that republishes our RSS news feed, please click through to our site to access a working version of the tool.

Now you have a fairly good sense of what percentage of all 129,600,000 U.S. households have a net worth that is either less than or equal to yours! The chart below shows our model for the distribution of net worth in the United States and how it compares to the data recorded by the U.S. Census. 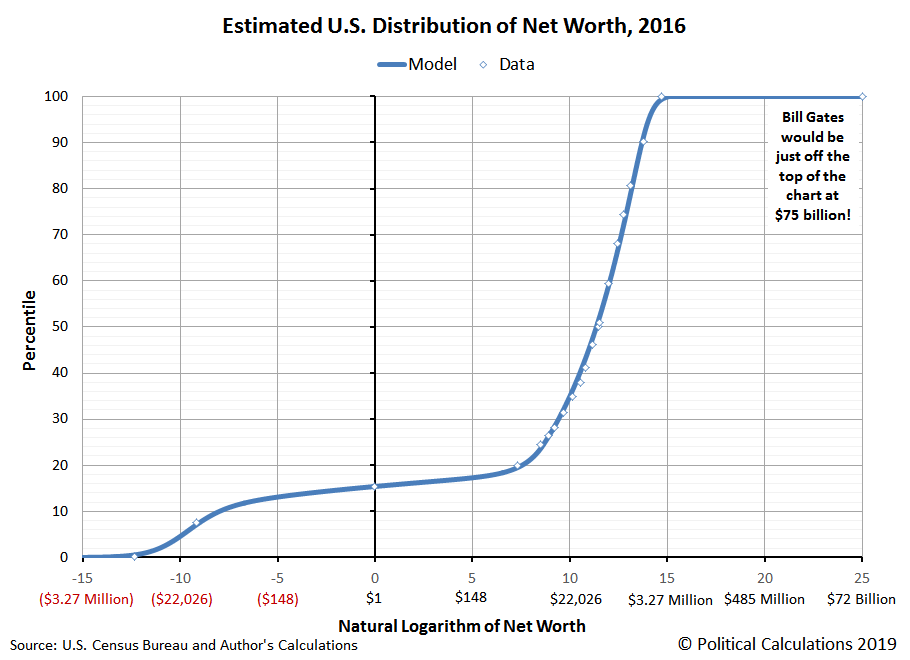 Overall, the tool is generally accurate to within about 1.5 percentiles of the reported data, which is pretty good given how we modeled the data, where we spliced two very different regressions to generate our results.

In addition to the Census Bureau's wealth distribution data, the Federal Reserve's Net Worth Percentile Calculator. Better still, if you want to find out how your household's net worth ranks among people in your age group, DQYDJ's Net Worth by Age Calculator has you covered!

Finally, we discovered that Microsoft (NYSE: MSFT) chairman Bill Gates had the highest reported net worth in 2016 thanks to the value of the shares he owns in the company he founded, which at $75 billion, would place him just off the top right end of the chart. The second highest net worth for an American belongs to Warren Buffett, whose accumulated net wealth over the last 49 years as the head of Berkshire Hathaway (NYSE: BRK.A, BRK.B) would appear on the chart at $60.8 billion (equivalent to a natural logarithm of 24.8).

The U.S. Census Bureau has reported its income distribution data for the United States in 2018. The following animated chart shows what the cumulative distribution of income in the U.S. looks like for individuals, families, and households, looping through each on five second intervals.

Want to find out how you rank among U.S. men, women, individuals, families and households? We have updated our What Is Your Income Percentile Ranking? tool to include the 2018 income distribution data just so you can!

Looking just at the distribution of household income over time, Mark Perry shows a pretty remarkable finding for the middle class contained within the Census Bureau's historic income distribution data since 1967: