Recently released "Global Location Trends: 2015 Annual Report" by IBM should be a pleasant read for Irish policymakers. The report "outlines the latest trends in corporate location selection — where companies are locating and expanding their businesses and creating jobs around the world."

And Ireland features positively and prominently, albeit with a caveat (below).

Take, for example, jobs creation by FDI-backed firms: per report, "Ireland and Singapore remain the strongest per-capita performers among the more mature (and, therefore, higher-cost) economies" 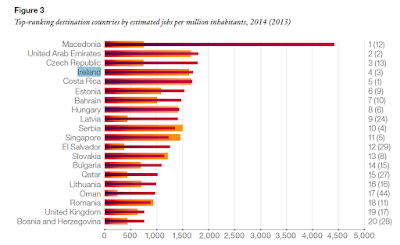 Notice that Ireland's rank has slipped slightly in 2014 compared to 2013.

Another category where we perform really strongly is average job value: 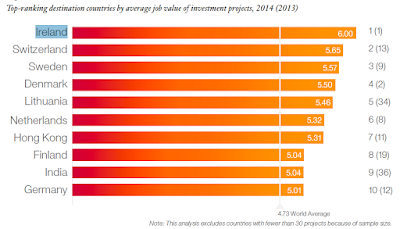 Per report: "For the fourth year in a row, Ireland is the top ranking country in the world on this measure. It continues to attract investment projects in industries characterized by high knowledge intensity and economic value added, such as life sciences and information and communication technology (ICT). The global top 10 ranking consists primarily of mature economies with a mix of investments similar to Ireland’s".

These are pretty impressive numbers, except for one major caveat: none of the report data was adjusted for corporate inversions. So when a U.S. company moves offshore to, say, Ireland (as many did and continue to do), via a tax-optimising inversion, the results appear to be an addition to Ireland's stock of FDI and Ireland's jobs creation, whilst in reality, both are superficial at best, and beggar-thy-neighbour at worst.

Perhaps surprisingly, despite being the main focal point of FDI inflows in the Republic, Dublin did not fare too well in the urban rankings, coming in at joint 12th position in 2014 ranking, down 5 places from the 7th rank in 2013. 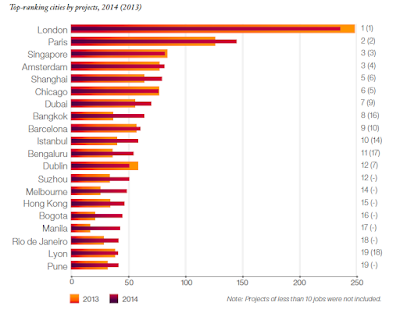 Overall, the positive tone of the report is more than warranted in Ireland's case.

Nonetheless, the problem of aggressive tax optimisation and sharp practices by a number of MNCs invested in Ireland should be reflected and discussed in the global rankings.

This is especially important, given the report claims to reflect quality of FDI and jobs created. Ireland attracts massive inflows of tax optimising FDI in the areas of ICT services, pharma, biotech and medical devices, with aggressive on-shoring of Intellectual Property, and dire lack of actual research jobs being created. Instead of actual research, jobs in sales and back office activities, as well as residual (lower value) research are being registered as being registered as 'Professional' or 'Scientific' and the value added by these jobs creation is often, de facto, fully reflective of tax optimisation schemes.
The report authors might want to consult some facts listed here.