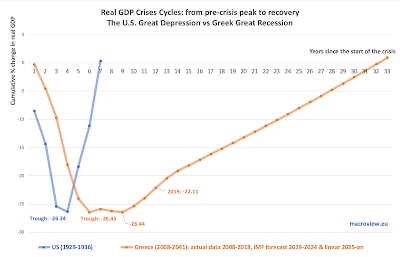 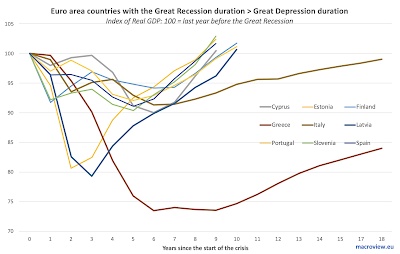 "The Cyprus risk score has steadily improved this year in Euromoney’s crowdsourcing survey, rebounding in Q2, and is seemingly on course for further improvement in Q3 as economists and other risk experts make their latest quarterly assessments. Chalking up almost 53.1 points from a maximum 100 allotted, Cyprus has managed to climb one place in the rankings to 56th out of 186 countries surveyed, leapfrogging India and closing in on Portugal into a more comfortable tier-three position:"

Here are my notes on the topic (to accompany the quote in the article):

In my view, Cypriot economy recovery after 3 years of deep recession and banking sector devastation is still vulnerable to growth reversals and deeply unbalanced in terms of sources for growth. Firstly, the rate of growth is hardly consistent with the momentum required to deliver a meaningful recovery. Cypriot GDP rose 0.2% y/y in 1Q 2015 and 1.2% y/y in 2Q 2015. This comes on foot of 14 consecutive quarters of GDP decline. Quarterly growth rate in 2Q came below flash estimate and expectations.

Positive growth was broadly based, but key investment-focused sector of construction posted negative growth. Deflationary pressures remained in the Cypriot economy with HICP posting -1.9% in August y/y on top of -2.4% in July. Over January-August 2015, HICP stood at -1.6% y/y.

Despite some fragile optimism, the Cypriot Government has been slow to introduce meaningful structural reforms outside the financial sector. The economy remains one of the least competitive (institutionally-speaking) in the euro area, ranked 64th in the World Bank Doing Business 2015 report - a worsening of its position of 62nd in 2014 survey. This compares poorly to the already severely under-performing Greece ranked in 61st place.

Thus, in my view, any significant improvements in the country scores relate to the policy-level post-crisis normalisation, rather than to a measurable improvement in macroeconomic fundamentals.