Here are the seasonally adjusted numbers from the November 2022 Employment Situation report, with their change from October 2022:

Since each of these data series undergoes its own seasonal adjustment, the figures won't add together as the non-seasonally adjusted data does. For the sake of sanity, here's that data along with its change from the previous month:

The following chart presents the seasonally-adjusted employment data for the working teen population, breaking down the data for younger teens (Age 16-17) and older teens (Age 18-19). 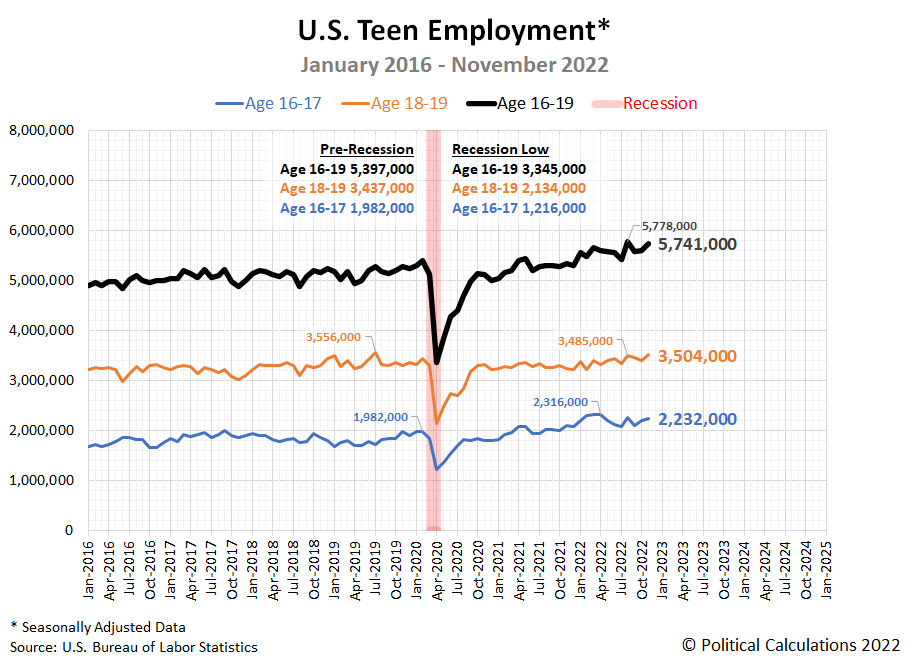 According to the seasonally-adjusted data, November 2022 saw 43,000 more 16-to-17 year olds successfully gain employment, while the number of working 18-to-19 year olds increased by 115,000 above October 2022's level. Only the jobs data for Age 16-17 working teens shows a flat-to-downward trend since April 2022. Older teens have experienced an upward employment trend during this period, which has not yet reached its pre-coronavirus recession peak.

Looking at the Age 20+ population, the bulk of reduced employment is taking place in the prime Age 25-54 demographic, with the Age 25-34 and Age 45-54 groups within this population having the biggest reduction in jobs during recent months.

After falling last month, the number of American teens with jobs slightly increased in October 2022.

The U.S. Bureau of Labor Statistics reports the seasonally-adjusted number of employed teens rose by just 27,000 in October 2022, with 5,592,000 teens counted as having jobs during the month. The following chart shows that small net change, but also illustrates some bigger changes for the working teen population. 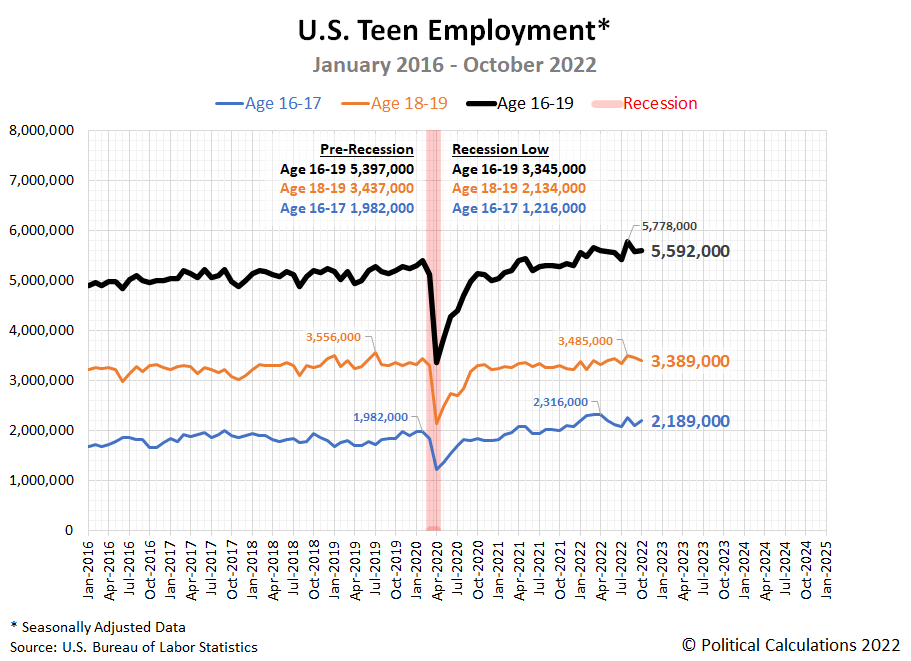 The small month-over-month net changes in the number of working teens means there was also little change for the employed-to-teen-population. Here's the chart showing no meaningful change in existing trends. 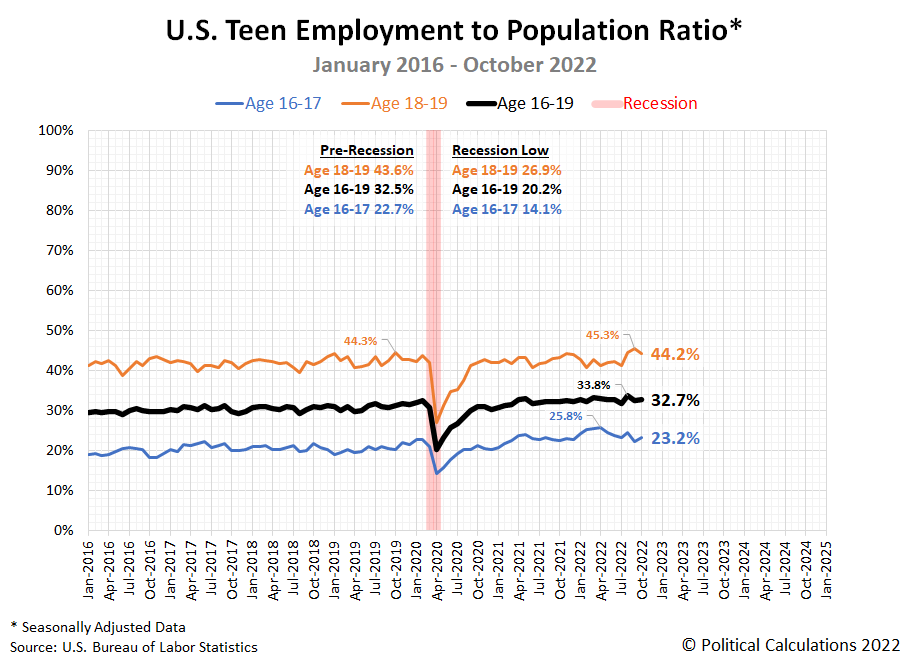 Although it ticked upward by a small amount, October 2022's figures did nothing the alter the generally trajectory for teen employment of recent months.

Last month's unexpected surge in the number of teens with jobs has largely dissipated. The U.S. Bureau of Labor Statistics reports the number of employed teens dropped by 213,000, falling to a seasonally-adjusted 5,565,000 in September 2022.

The following chart indicates most of that decline occurred among younger teens, while older teens saw a much smaller month-over-month reduction. 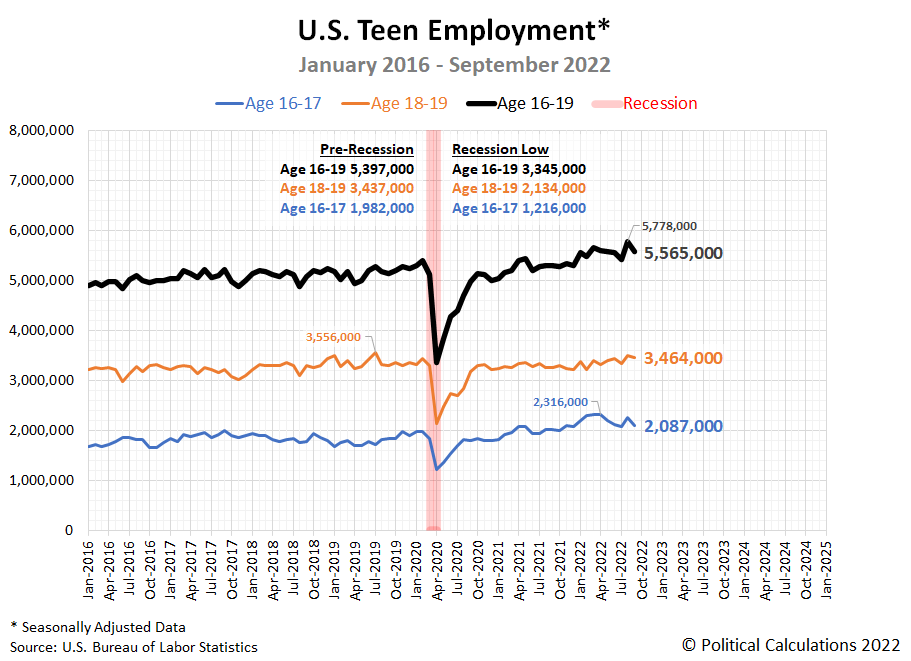 Readers should note that each data series in this chart has been put through its own seasonal adjustment by the BLS' analysts, which is why the figures for the Age 16-17 and Age 18-19 subgroups don't add up to the total for the Age 16-19 population. The non-seasonally-adjusted data does, which shows much larger month-over-month reductions for all groups than what's indicated in the chart. The factor that accounts for why the seasonal adjustment works that way is the annual start of the school year in September, which sees teens return to classrooms across the U.S.

Looking at the chart showing the employed-to-population percentages for each of these groups shows the effect of an interesting demographic quirk. 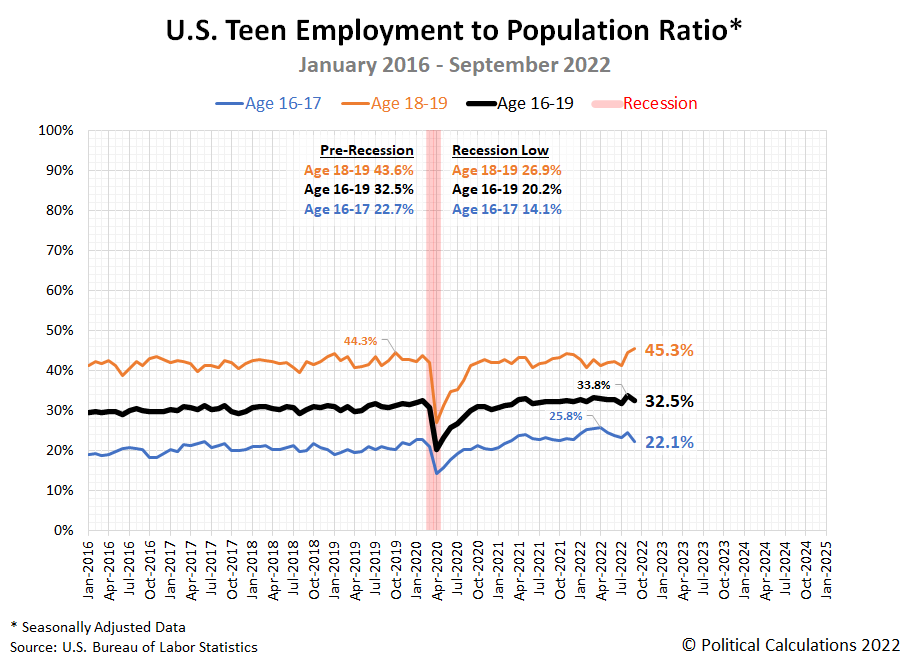 Here we find the seasonally-adjusted share of working Age 16-17 teens declined, as might be expected, but the percentage of Age 18-19 teens with jobs increased to the highest level shown in the data. Since the seasonally-adjusted data shows declines for both groups, the only way that can happen is if the estimated population of Age 18-19 year olds shrank during the month. Which, thanks to a quirk of statistical noise in the BLS' household survey data, is exactly what happened!

Finally, the topline seasonally-adjusted numbers for the September 2022 employment situation report indicate 158,936,000 Americans are employed, a month-over-month increase of 204,000 with the unemployment rate falling from 3.7% to 3.5% . The teen unemployment rate jumped from 10.4% to 11.4% in this period, consistent with how it has varied during the past year.

Last week, the Bureau of Labor Statistics reported higher than expected job growth in the U.S. Total nonfarm payroll employment increased by 315,000 in August 2022 to a seasonally adjusted level of 152,744,000. Meanwhile, total employment captured in the BLS' monthly survey of households increased by 442,000 to reach an estimated level of 158,732,000. But because more Americans entered the civilian labor force during the month, the unemployment rate rose from 3.5% to 3.7%.

Those are the topline numbers from the report. Since we're following the employment situation for teens, we have to dig deeper into the household survey for that data. Here, we find that both the number of employed teens and the share of working among the Age 16-19 population in the U.S. surged during August 2022. The first chart shows the seasonally adjusted number of employed teens for Age 16-19 teens, along with the Age 16-17 and Age 18-19 subsets of that population from January 2016 through August 2022. Note: since each of these individual data series has been put through its own seasonal adjustment from the raw data, the numbers shown in the chart won't directly add together. 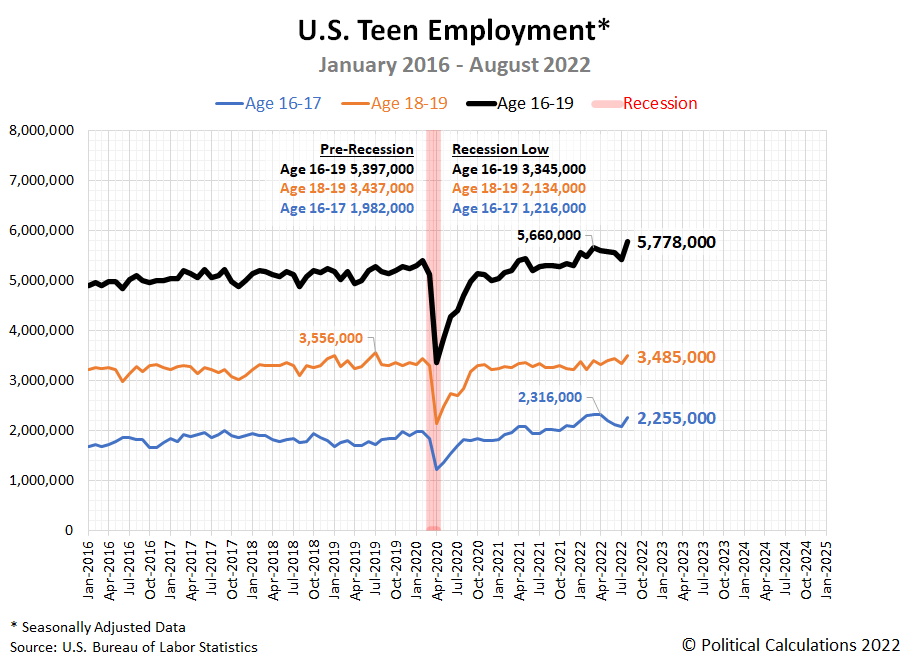 The same is true when we look at the teen employment-to-population ratio for each demographic in the next chart: 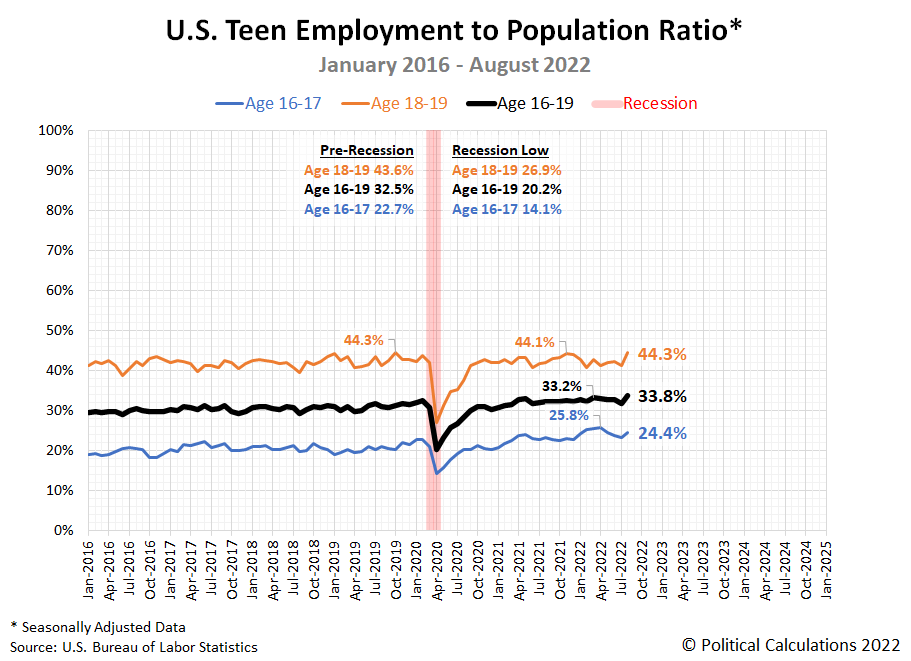 Now, let's compare the month over month numeric change in the seasonally adjusted total number of working teens with the change in the total number of Americans counted as having jobs in the BLS' household survey. Total employment increased by 442,000, the number of working teens increased by 363,000, which would account for 82% of the net change. The gain in jobs appears to have been dominated by newly employed teenagers being added to the U.S. labor force.

Or would, if the seasonal adjustment didn't give these numbers an apples and oranges character. To address that deficiency, we dug deeper into month's household data to get the raw, nonseasonally adjusted numbers, which do directly add together.

Here, we found the total of employed Americans shrank by 353,000, dropping to 158,714,000 from July to August 2022. In this case, the seasonally adjusted figure showed an increase instead because this decline is much less than would be expected per the seasonal pattern for employment at this time of year. Looking at teens, we find the same pattern. We find the nonseasonally adjusted total number of employed teens dropped by 310,000 from July to August 2022. That figure represents 88% of the actual net month over month change in the household survey's count.

This outcome helps demonstrate the extent to which the employment situation for teens, the most marginal age demographic in the civilian labor force, can affect the topline numbers reported in the monthly employment situation report. It is why we pay attention to it. In August 2022, more teens staying at their jobs than expected accounted for the vast majority of all the positive net gain in the August 2022 report.

For a job market that was reported to be much, much stronger than expected, you wouldn't know it from teen employment data.

Here's the lead paragraph of the July 2022 report:

Now, square that with what the Bureau of Labor Statistics reported for teen employment, two-fifths of whom find work in the leisure and hospitality service sector of the U.S. economy identified for its July 2022 job gains, for whom we've updated our teen employment chart: 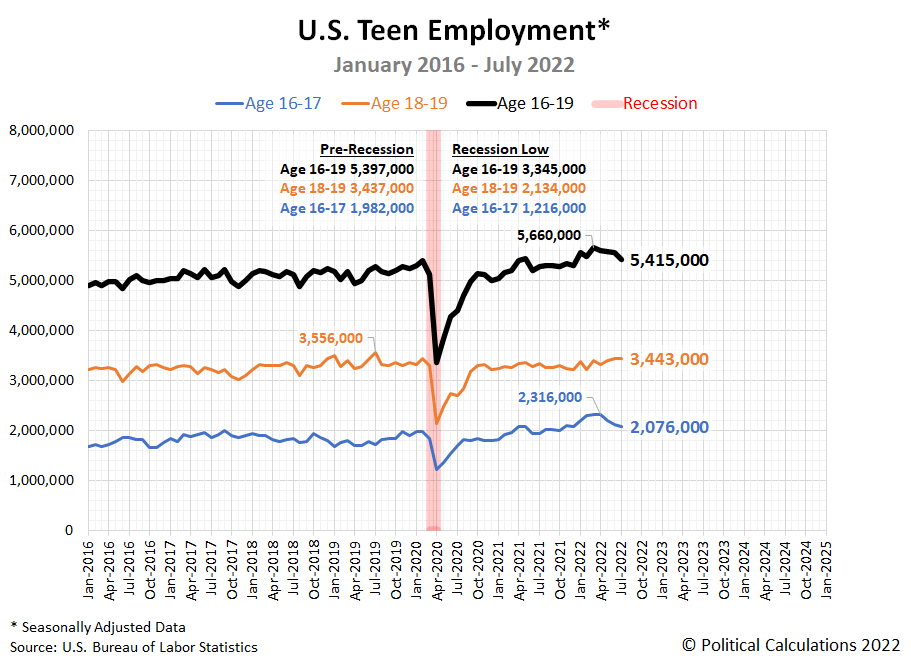 And also our chart tracking the teen employment-to-population ratio to take any potential changing age demographics into account: 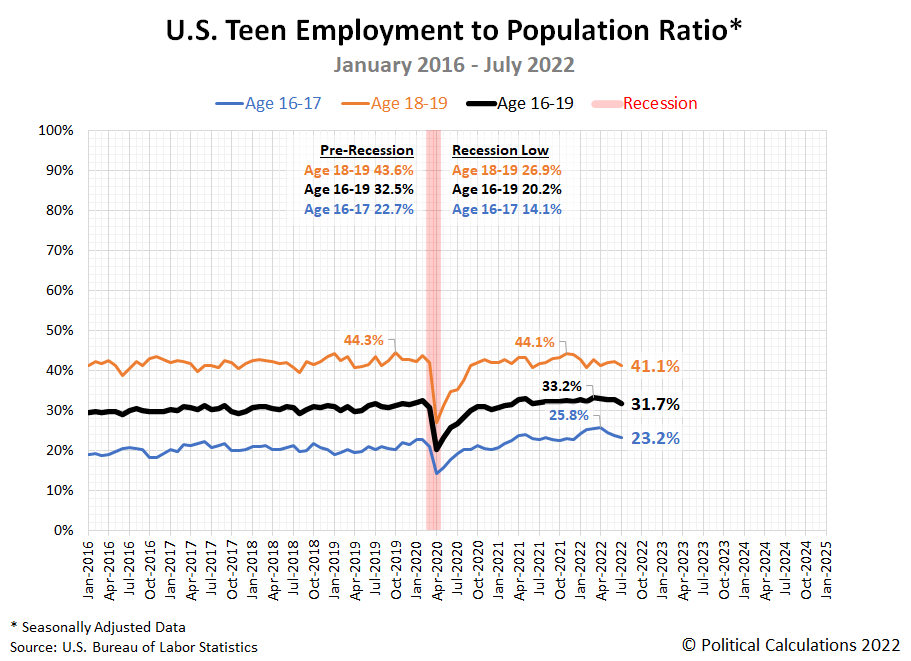 The seasonally-adjusted teen employment data isn't squaring up with the reported increase in payroll employment. Younger teens (Age 16-17) are continuing to see their numbers among the employed fall from their recent peak in April 2022, while older teens (Age 18-19) saw their numbers hold steady month over month. Consequently, the combined total for the full Age 16-19 population continued its downward trend in July 2022.

When you consider that July represents the height of teen availability for employment in the U.S., the falling seasonally-adjusted teen employment figures suggest a developing weakening that contradicts the headline jobs numbers.

Here are the other posts in our "Teen Canaries in the Coal Mine" series on teen employment trends, presented in chronological order: