An informative chart via Holger Zschaepitz @Schuldensuehner on the Global equity markets impact of the continuously evolving threat of the nCov-2019 or #COVID2019 virus epidemic: 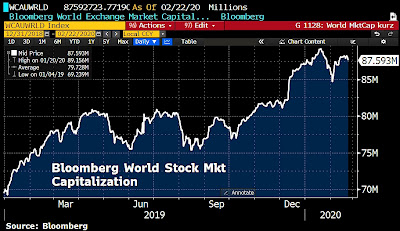 Looks not quite as dire as it might sound, folks.
Looking at longer terms within the advanced economies, here is a summary of the major indices cumulative moves over the 1 week - 6 months time horizon in percent:

So far, no panic, but last week really does look ugly, unless one seriously thinks about the degree to which market pricing is divorced from economic fundamentals, as exemplified by the 6 months changes: 22.26 percent upside in Nasdaq? 15 percent in Germany? 13.43 percent in Japan?..
So let's ask two questions: Q1: Does anyone believe there are long term economic or socio-economic fundamentals behind the above numbers? and Q2: If the markets are pricing in monetary sugar buzz of Kiddies at Halloween  Bucket of Sweets proportion on the upside, how on earth can the same markets price some serious fundamentals on the downside?
The markets gyrations are only tangentially - and only in the short run - relate to tangible news flows, like nCov-2019 statistics. And they sure a hell do not relate linearly to any data on GDP impacts of the epidemic. Because markets have not reacted to GDP figures since well-before the Global Financial Crisis hit. Worse, there is no logic that can explain why markets are reacting to nCov2019 promise of dropping interests rates and priming the global QE pump in an opposite direction to the markets reactions to all previous slowdowns in global growth.
We are still dealing with the same 'clueless and buzzed' crowd of 'investors' who value Tesla at inverse of the company's manipulated core statistics, and Netflix at inverse of company's manipulated profitability metrics, and Apple at inverse of company's forward growth potential. We are still dealing with the same 'jittery herd' that slushes from one 'not QE' to another 'Abenomics breakthrough' to the fiscal policy moaning of the ECB, while stopping to slam some shots at the occasional 'take profit' Wild West saloon.
Forget one week to next markets gyrations. The real impact of nCov epidemic won't be seen until we have the monetary policy reactions at an aggregate level. So watch this chart instead: 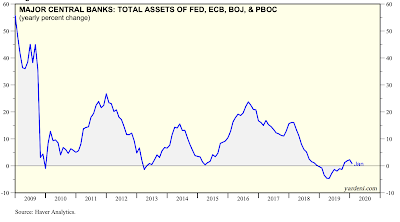 When this line heads North above 3-4 percent mark, the real markets data will come in. Indications are: https://www.marketwatch.com/story/all-star-economists-urge-fed-to-use-qe-and-new-tools-to-fight-next-recession-just-move-sooner-and-go-bigger-than-crisis-2020-02-21?mod=the-fed.
Euromoney analysis of Q3 2019 results for country risk surveys and risk outlook forward, with lots of comments from myself and others: https://www.euromoney.com/article/b1hjf7xr90tdkj/ecr-survey-results-q3-2019-us-china-canada-mexico-punished-by-tariffs. 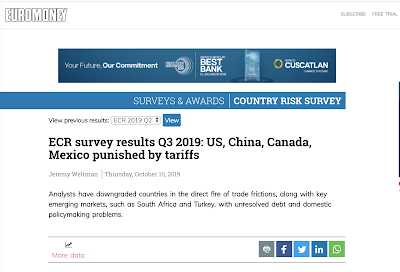 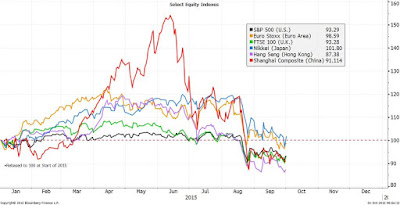 The scary bit is that this is in own-currency terms and that the rot is well beyond the EMs and China.

I cover some of these issues in a guest contribution to GoldCore's quarterly review for 3Q - read in full here.