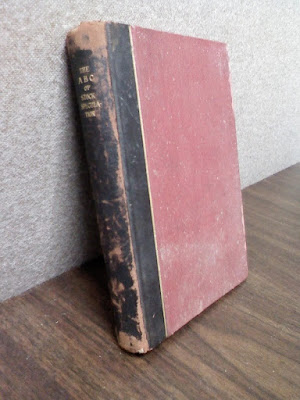 Not long ago, we came across a first edition copy of Samuel A. Nelson's The A B C of Stock Speculation, copyrighted in 1902, and published as Volume V in Nelson's Wall Street Library series.

The book is significant because it collected a number of the columns that Charles Dow, the originator of the Dow Jones Industrial stock market index, had originally published in the Wall Street Journal on the subject of how to analyze stock prices to determine the best times to either buy or sell shares of stock.

Published after Dow's death, it was the world's introduction to what would become known as a result of the publication of this book as Dow Theory, which has proven to be amazingly influential and is still being actively applied by a number of stock market analysts today. Here is Barnes & Noble's overview for the 2007 reprint of the book:

"Speculation is a venture based on calculation."

First published in 1903, The ABC of Stock Speculation is a landmark achievement for the profession of stock speculation. This book not only established our modern view of the fundamentals of speculation, it did so through the precise and insightful writings of Charles H. Dow, coined in this book as Dow's Theory.

Nelson, friend and admirer of Dow (first editor of the Wall Street Journal and co-founder of the Dow Jones Industrial Average), sensed that Dow had developed a philosophy, some say subconsciously, which speculators and businessmen could adapt as a reliable guide for conducting their financial operations. After failing to persuade Dow to write his own book, Nelson spent long hours researching the Wall Street Journal for the most exceptional Dow editorials, 15 of which he included in this book.

It has been over 100 years-yet even in today's tech-heavy, volatile markets, the basic components of Dow Theory, technical analysis, price action, and market philosophy, still hold true. Nelson says it best, "Men rather than markets differ."

Needless to say, the book has been amazingly influential over the years and is still in print. You can buy your own modern copy via Amazon.com ($0.99 for the Kindle edition, $28.91 for Hardcover or $12.15 for paperback). Or you could read a scanned copy of the original edition online for free at the Internet Archive's openlibrary.org or via Google's ebook edition.

Today, a first edition copy like the one pictured above can have asking prices of anywhere from $350 to $650 depending upon how well it has held up over time. And for what it's worth, based on its condition, our original edition would fall somewhere in the middle of that range.

We see then that the price in dollars that one might pay to learn Dow's Theory in his own words ranges anywhere from $0 to $650.

So how much is Dow's Theory worth?

If it is just the words, you can have them for the price of an Internet connection and whatever electricity you consume as you review them or the price of whatever modern physical edition of the text that you might choose to purchase. If it is the first edition of the book that is what is valuable, then the question gets a lot more difficult to answer as you might consider it an investment worth speculating in as the value might rise or fall as time progresses.

Since that would mean that the problem has been reduced to a speculative calculation, could you use Dow's Theory to answer the question? And if you cannot, just how much is Dow's Theory worth?