You know, there’s always fun to be had with the IMF’s Fiscal Monitor updates. If only because they throw some light onto yet to be published WEO updates. But this time around, I was given a mission. Someone few weeks ago on twitter suggested that I should revisit some comparatives between Iceland and Ireland. And so here we are, fresh Fiscal Monitor at hand, let’s crunch the numbers.

Take General Government Overall Balance as % of GDP. In 2014, Ireland (best pupil in the Euro class) had a deficit of 4%. This year, IMF forecasts a deficit of 2% (significantly outperforming our Troika allowance). Which is great news. Iceland (the ‘bad pupil in class’ judging by its desire to burn bondholders in the past) had deficit of 0.2% of GDP in 2014 and is forecast to post a surplus of 1.3% in 2015. Add two numbers together and you get 2 years cumulative deficit of ca 6% for Ireland and cumulative surplus of ca 1.1% for Iceland. Iceland will be posting its first full budgetary surplus in  2015 according to the IMF latest figures, Ireland will get there in… well, not any time before 2021 as IMF projects our best performance to be 0% deficit in 2018-2020. Who’s that pupil at the back row?..

So I’ll sum up for you the IMF latest data in 2 charts. Self-explanatory. In both charts, positive values showing Iceland outperforming Ireland in fiscal metrics. Enjoy: 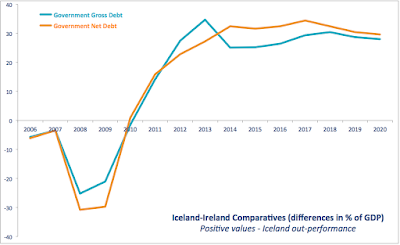 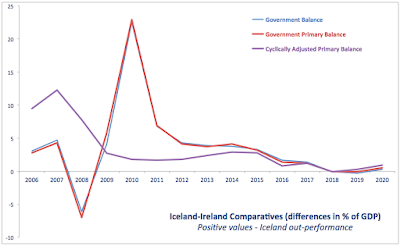 While Ireland did deliver impressive adjustments on fiscal side post-crisis peak, it is simply incorrect to identify our adjustments as being consistent with achieving performance better than that found in Iceland over the same period.