One very important point being raised in this article from the Economist: "Controlling for the range of things that influence interest rates, from growth to demography, economists have attempted to gauge the impact of reserve accumulation. Francis and Veronica Warnock of the University of Virginia concluded that foreign-bond purchases lowered yields on ten-year Treasuries by around 0.8 percentage points in 2005. A recent working paper by researchers at the European Central Bank found a similar effect: increased foreign holdings of euro-area bonds reduced long-term interest rates by about 1.5 percentage points during the mid-2000s."

Which brings us to the idea of the 'savings glut' over the 2000s. I covered this in this article concerning the twin threats of supply and demand side-driven secular stagnation.

The Economist give us one side of that equation: Sovereign Reserves 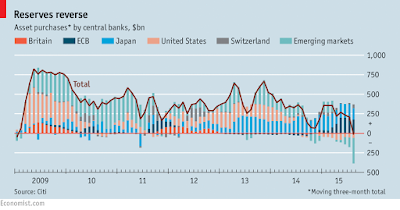 All of which has two implications:

Both points reinforce the adverse impact on global growth prospects.