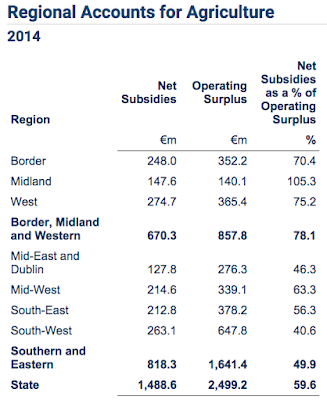 High as a kite on subsidies, Irish agriculture nonetheless managed to improve, thanks in part to lower euro valuations, its value added relative to subsidies. In 2012 net subsidies counted for 72.1% of total operating surplus (or income) in the sector, falling to 63.4% in 2013.

For the politicians claiming immense importance of the sector to Ireland, a quick reality check: Gross Value Added (which includes all labour inputs and capital spending in the sector, as well as subsidies net of taxes) stood at EUR2.192 billion in 2014.

And of that, subsidies accounted for 69.4 percent of total Gross Value Added - more than 2/3rds of Irish Agricultural Value Added came via a cheque from Europe, not from customers buying the goods.

In fact, claims about Irish Agricultural Sector contribution to the economy are often wildly off the mark. Per CSO data, the highest metric of this sector activity - Agricultural Output at Basic Prices is EUR7.328 billion for the entire 2014 and of these 20% (one fifth) were net subsidies.