The paper is really too extensive to summarize here, so I encourage everyone interested in cryptos to read it. I can, however, offer some non-priority ordered comments on some of the passages I find interesting and novel.

Let's start with 'efficiency' and the 'nothing-at-stake problem'. Authors reference Saleh (2019) which derives "sufficient conditions that guarantee that consensus" to fork is an equilibrium. "Saleh then derives two additional results.

Another issue, relating to efficiency, is transaction costs: the paper reviews Huberman et al. (2019) on this. There are several problems relating to the Bitcoin system capacity to process and record information that relates to the way transaction fees are being priced and charged. These are largely consistent also with Easley et al. (2019). One is that "miners are not only engaged into a hashing race, but they also strategically select transactions to process in order to grab the highest fees." Another is that the system requires congestion to generate fees. The third is that once block rewards are exhausted, the system can lead to concentration of market power as miners will rely solely on transaction fees to exist. This power concentration can lead to higher costs of transactions, and "may result in turn in a weakening of the system's safeguards against double-spending".  Lastly, "if all users pay the fee, the deviation to no fee is very costly, because it automatically puts the no fee transaction at the very end of the queue. This cost may be higher than the fee itself." In other words, in the "all users pay" environment, system congestion can lead to highly costly delays in processing of information.
User adoption: "Foley et al. (2019) fi nd that approximately one-quarter of bitcoin users are involved in illegal activity, which they estimate to represent 46% of bitcoin transactions. Based on their estimates, the illegal use of bitcoin generates approximately $76 billion of illegal activity per year. In terms of comparison, they note that the scale of the US and European markets for illegal drugs is only slightly larger! They do find that since 2016 the proportion of bitcoin activity associated with illegal trade has declined, but the absolute amount of activity (in USD) has continued to increase."
"One example of illegal activity that currently flourishes with Bitcoin is "ransomware" attacks in which criminals exploit vulnerabilities in computer networks to "lock" fi les so that the user cannot access them. As documented in an article in the New York Times by Nathaniel Popper, in 2019, more than 200,000 organizations submitted files that had been hacked in a ransomware attack. This was a 40 percent increase from the year before,"
The literature on the subject is "consistent with what we know about adoption by large merchants. According to the Economist magazine using data from Morgan Stanley, in 2018, only three of the largest 500 online retailers accept Bitcoin for payments", which is down from five such retailers accepting Bitcoin in 2017. "The conventional wisdom for the lack of adoption of Bitcoin as a payment system is that very few "legal" goods are purchased using Bitcoin because its value is not stable and the system is very slow in processing transactions."
User intent: "Most of the empirical research we discussed... suggest that currently, bitcoin demand is driven by speculation alongside likely illegal intent. A broader claim about bitcoin demand is that it is used as a hedge against inflation" (or as a form of 'digital gold'). The paper argues that BTC/USD pricing of July 2019 or something around USD9,630 per BTC would be consistent with all cryptocurrencies taken as whole replacing 100% of the privately held investment gold in the world for the gold price of USD 1,444 per ounce. As we say before running a Category V rapid... "Good luck on the down".
Pump and dump coins: "Hamrick et al. (2018) present compelling evidence of pervasive pump-and-dump schemes resulting from a systematic analysis of multiple datasets ... they identify more than 3,000 pump-and-dump schemes over a just 6 month period in 2018."
Our new paper, with Daniel O'Loughlin, titled "Herding and Anchoring in Cryptocurrency Markets: Investor Reaction to Fear and Uncertainty" has been accepted to the Journal of Behavioral and Experimental Finance, forthcoming February 2020.

Abstract:
Cryptocurrencies have emerged as an innovative alternative investment asset class, traded in data-rich markets by globally distributed investors. Although significant attention has been devoted to their pricing properties, to-date, academic literature on behavioral drivers remains less developed. We explore the question of how price dynamics of cryptocurrencies are influenced by the interaction between behavioral factors behind investor decisions and publicly accessible data flows. We use sentiment analysis to model the effects of public sentiment toward investment markets in general, and cryptocurrencies in particular on crypto-assets’ valuations. Our results show that investor sentiment can predict the price direction of cryptocurrencies, indicating direct impact of herding and anchoring biases. We also discuss a new direction for analyzing behavioral drivers of the crypto assets based on the use of natural language AI to extract better quality data on investor sentiment.

Myself and Professor Shaen Corbet of DCU have a new article on the LSE Business Review site covering our latest published research into cryptocurrencies valuations and dynamics: https://blogs.lse.ac.uk/businessreview/2019/10/07/bitcoin-ethereum-and-ripple-a-fractal-and-wavelet-analysis/.

The article profiles in non-technical terms our paper "Fractal dynamics and wavelet analysis: Deep volatility and return properties of Bitcoin, Ethereum and Ripple" currently in the process of publication with the The Quarterly Review of Economics and Finance (link here). A quick - and dirty - run through the argument that Bitcoin serves as a hedge or a safe haven for stocks. This argument has been popular in cryptocurrencies analytical circles of recent, and is extensively covered in the research literature, when it comes to 2014-2017 dynamics, but not so much for 2018 or even more recent period dynamics.

So here are two charts for Safe Haven argument: 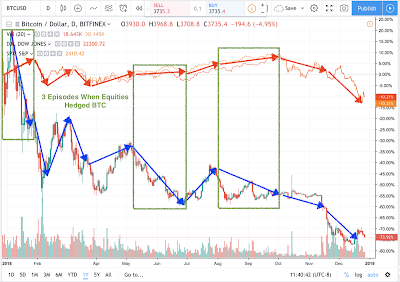 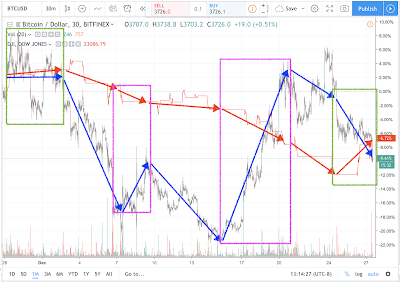 The first chart shows that over the last 12 months, there were 3 episodes when - over time, on average, based on daily prices, stocks acted as a strong hedge for BTCUSD. There are zero periods when BTCUSD acted as a hedge for stocks. The second chart shows that within the last month, based on 30 minutes intervals data (higher frequency data, not exactly suitable for hedge testing), BTCUSD did manage to act as a hedge for stocks in two periods. However, taken across both periods, overall, BTCUSD only acted as a weak hedge.
The key to the above is,  however, the time frame and the data frequency. A hedge is a longer-term, averages-defined relationship. Not an actively traded strategy. And this means that the first chart is more reflective of true hedging relationship than the later one. Still, even if we severely stretch the definition of a hedge, we are still left with two instances when the BTCUSD acts as a hedge for DJIA against two instances when DJIA acts as a hedge for BTCUSD.
People commonly confuse both hedging and safe haven as being defined by the negative symmetric correlation between assets X and Y, but in reality, both concepts are defined by the directional correlation: when X is falling, correlation myst be negative with Y, and when Y is falling, correlation must be negative with X. The downside episodes are what matters, not any volatility.
Now, to safe haven: 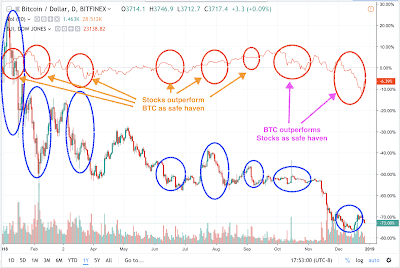