There's a trick for multiplying numbers that goes back hundreds, if not thousands, of years. Here are the steps to do it:

Different variations of this trick have been done since ancient Egyptians first came up with what might be the original version of it. In the following Numberphile video, Johnny Ball reveals the magic behind how the trick works, which involves secretly converting the first number you're multiplying into its binary code.

Nobody tell Dan Brown about the Egyptian code!

Modern integral calculus, as we know it in the modern world, traces its origins back to the late 1600s. Having had several hundred years, mathematicians have made a lot of progress in solving problems using integration. Their work now spans thousands of integral equations, filling hundreds of pages in books dedicated to the topic.

That's why we found a recent local news article so amazing, because a Gainsville, Florida high school student has made a contribution to that canon. In the following excerpt, he describes how his inspiration came about:

Glenn Bruda came up with the idea for his calculus integration formula late one night in May 2021.

He recalled going to bed at 11 p.m. after doing some math for fun. Bruda woke up at 2 a.m. feeling parched. He grabbing a glass of water and walked back to his bedroom when the new math formula appeared in his head.

"And I jotted it down really quickly on a notebook. And then I went to sleep," Bruda said.

The formula was a new integration technique that can be used to solve a calculus equation. The name of the technique: the Maclaurin Integration.

Bruda has described it this way: "Maclaurin Integration is a new series-based technique for solving infamously difficult integrals in terms of elementary functions. It has fairly liberal conditions for sound use, making it one of the most versatile integration techniques."

That's not something that happens every day, so we went to his pre-print paper to learn more. In it, he gives two examples of equations that do not have integral solutions, which we've presented on a single line below:

It is possible to integrate these equations to find solutions, but it takes a remarkable amount of work to do it, often using advanced techniques using Sine Integrals, Si(x), or probability based Error function Integration, Ei(x).

Or, if you want to save time over these methods, you could use a famous integration trick introduced by Richard Feynman. The following video by blackpenredpen shows how to use Feynman's technique to integrate Bruda's first example, sin(x)/x, from 0 to infinity:

Having seen that, let's look at why the Maclaurin series might provide a much easier path to find integral solutions. The next video, by patrickJMT, uses a Maclaurin series to find an approximate solution for another difficult equation to integrate to a desired level of accuracy:

This particular video does an excellent job in explaining the steps in the math being done as the solution is developed. Which we think makes the third video, by The Elements of Math, in which the Maclaurin series is specifically used to find an approximate solution to the definite integral for sin(x)/x, a lot easier to follow:

This third video was published less than a month before Glenn Bruda's middle-of-the-night inspiration. That timing raises a question. If other mathematicians are already using Maclaurin series to deal with difficult to integrate equations, what has Bruda contributed to the world's mathematical knowledge?

What Bruda brings to the table that's new is a standardized and simplified algorithm for setting up the Maclaurin series math to be able to perform the various integrations for which integral solutions are not able to be expressed using elemental functions. The method he introduces makes the computation of their solutions easier to execute that can be applied to a wider array of problems than existing methods. Anyone who has ever had to find a solution for a mathematical equation that does not have a direct solution using numerical methods can appreciate that achievement. We'd love to see Bruda further develop his pre-print paper by providing the solutions for each of the examples he presents in an appendix, if not in the main body of the paper itself.

All in all, Bruda's paper represents the kind of hands-on, practical application of maths we like to celebrate! Which is why we are.

The online word puzzle Wordle took the social media world by storm in 2022. So much so that the original game has spawned several clones and imitators.

Among those are several number and maths-related puzzles, which we'll feature today. First up is Primel, which is played just like Wordle but using numbers, in which the goal is to correctly identify a five-digit prime number within six lines of guesses. But here's the catch: each line entry has to be a five-digit prime number! Here's a screenshot of our attempt to play the game last weekend: 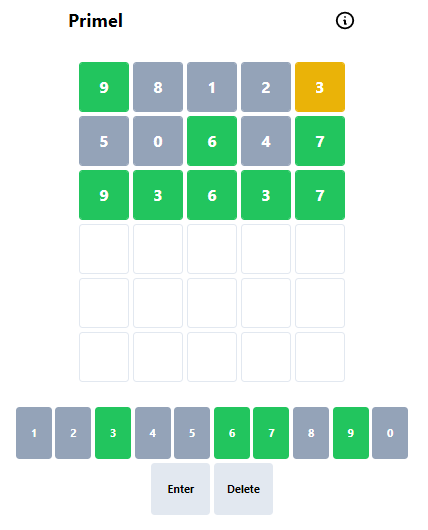 If this particular game sounds suitably challenging, please click here to access today's game directly. To help you get started, here's a list of five-digit prime numbers to use for reference.

If you find Primel to be too easy, let's kick it up a notch by introducing math equations into the mix! There are two prominent puzzles of interest in this category: Nerdle and Numberle. Both are played the same way, where you need to enter a valid math equation for each of your guesses, with the results giving you hints as to what each day's target equation is.

Of these two maths puzzles, Nerdle has become more popular thanks to its creator's social media efforts. Here's our solution to one of the daily games from this past weekend: 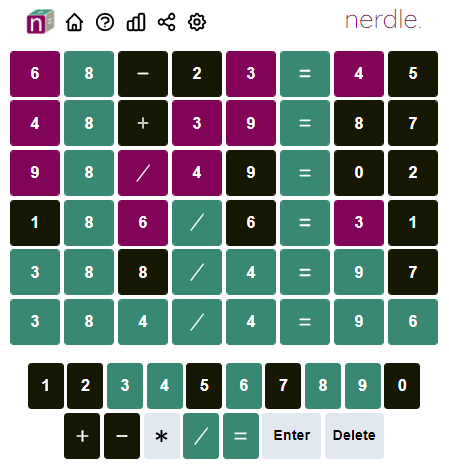 We played this one a lot less strategically than we played the Primel game. Here, we gave ourselves the additional limitation that if we got any of the digits, operators, or equals signs right, we would stick with that result. Fortunately, we were able to get to the target equation by the sixth row.

But what if that's still too easy? Or if it's too hard? That's where Numberle comes in, because unlike Primel or Nerdle, it allows you to customize the puzzle you solve. You can set it up to play it with as few as 5 characters or as many as 12. Or you can generate your own puzzle with which to share and challenge your friends. Here's a screenshot of the settings screen to give you an idea of how you might tweak the puzzle how you like: 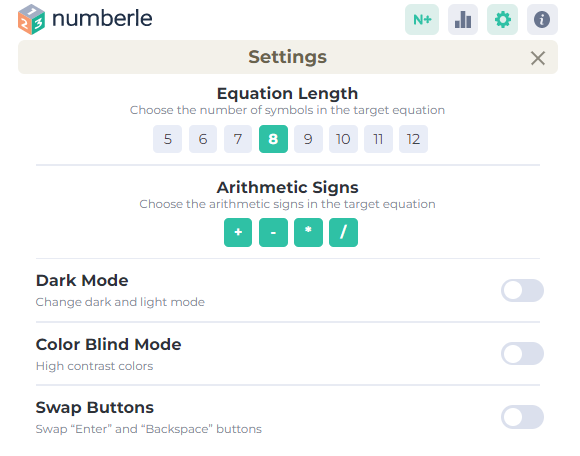 As for how you play Numberle, it's just like Nerdle, but a little more user friendly for new players since it provides examples and instructions below the day's puzzle.

The Riemann Hypothesis is *the* most unsolved problem in mathematics. In fact, if anyone can prove the hypothesis, they stand to win $1 million U.S. dollars from the Clay Mathematics Institute, who named it one of their Millennium Prize Problems.

But what is the Riemann Hypothesis? Quanta Magazine put together a fantastic video introduction narrated by Alex Kontorovich to explain what it is, including its connection to how prime numbers are distributed into infinity.

The Riemann Hypothesis is an example of a mathematical conjecture we're pretty sure is true, but which no one has been able to definitively connect all the needed dots to prove. Mathematicians have used computers to confirm the Riemann Hypothesis holds over its first 10 trillion cases, but that brute force method falls far short of what's needed to prove it holds over all its possible cases in infinity.

Of course, that's the standard for mathematicians. If they were physicists, they would already be satisfied with the outcome from that achievement!

Have you ever really thought about odd numbers? Or what it is that makes them odd?

Vsauce's Michael Stevens has, sharing his thoughts in the following 22 minute video, which goes in directions you might not expect to explain why odd numbers mysteriously show up when gravitational acceleration is involved:

We're still on the fence as to whether the rules should prevent dogs from playing high school basketball, but the universe is an odd and mysterious place. Which is to say it's more entertaining when they can, once. We believe any potential sequels or reboots however should be strictly prohibited and are happy to cite the Beethoven franchise as proof.