Roberto Valencia of El Faro looks at whether we should celebrate the 25 percent decrease in homicides that El Salvador experienced in 2017. He has four takeaways.

First, El Salvador should recognize that its murder rate has dropped for two consecutive years, but in no way should the government celebrate that its rate now is only 6 times what is considered epidemic.

Second, government action is not primarily responsible for the movement of the country's homicide rate. January and February 2017 were the two least violent months of the year. They just so happened to be the two months during which the country's gangs offered to enter into dialogue with the government. Unsurprisingly, September and October were the most violent months of the year, two months when the gangs sought to demonstrate their strength in front of the government.

Third, the geographic distribution of homicides is changing once again. There appears to be a balloon effect. Several of the country's most violent municipalities in 2017 were not among the 50 most violent municipalities as designated by the government in 2014 and 2015. There might be some evidence that Plan Safe El Salvador is working. However, it could just be that the gangs have moved, which is good for the people of those municipalities where violence has gone down but is short of saying that a plan worked.

Finally, homicides in San Salvador decreased 47 percent last year. Something for Mayor Nayib Bukele to celebrate. However, what is striking is the emptying of the city. From 2005 to 2018, the capital's population decreased from 363,000 inhabitants to 229,000. San Salvador is losing 10,000 residents each year.

Guatemala's homicide rate has decreased year-over-year for nearly a decade. We should be skeptical about the causes of such a decline but recognize that it has been a sustained decline. El Salvador has only had two years of decreases. That is positive. However, as Roberto notes in his article, the first quarter of 2017 drove the year's statistical decrease. The rest of the year was quite bloody. Homicides also tend to go down when the gangs want them to go down. We don't know what they will want in the run up to the 2018 elections.
According to official statistics, homicides were down all around Central America's Northern Triangle. In Honduras, the government says that the country's murder rate decreased by more than 25 percent in 2017 to end the year at 42.8 killings per 100,000 people. The Salvadoran government claims that its murder rate fell to 60.8 per 100,000 people. They credit better police strategies and prison reform for bringing the rate down from 104 in 2015 to where it is today. Finally, Guatemala achieved another year over year decrease in its homicide rate. The murder rate fell to 26.1 per 100,000 people - the lowest rate in 18 years.

Lower murder rates should be welcome news to the people of the region. However, insecurity remains high. Citizens do not feel safer. They do not trust government supplied statistics. And, at least in Honduras and El Salvador, the lower rates have perhaps come as a result of more aggressive policing. The aggressive policing has caused increased conflict between security forces and citizens, not just security forces and gang members.

It's not clear how sustainable these statistical improvements are. However, that's what I said about Guatemala. After five or so years of decreased homicide rates, I didn't think that they would go any lower until there were significant improvements to the country's economic, political, and social structures. However, Guatemala has proved me wrong. There's been some improvement in the country's security institutions but poverty has increased and the political system remains a mess. In spite of it all, it's murder rate is back to where it was in 2000 (25.9).

I can't help but think that the U.S. government might use these statistics to argue that Honduras and El Salvador no longer need Temporary Protected Status (TPS). They would be wrong. The murder rate in Honduras is still 4 times what the World Health Organization considers to be an epidemic of violence. And El Salvador's rate is 6 times what is considered to be epidemic. Termination of TPS will most likely reverse some of the progress made in 2017.
Guatemala's homicide rate has decreased for several years now. Honduras and El Salvador are hoping to follow the same trajectory. Honduras's murder rate fell from from the 80 and 90+ per 100,000 people it suffered in 2011 and 2012 (perhaps as high as 104 by some estimates) to approximately 60 in 2015. According to a recent report by the Observatory of Violence at the National Autonomous University of Honduras, the country's current homicide rate is slightly lower than last year's and is on pace to come in under 60.

In a similar fashion, El Salvador's murder rate looks to experience a decrease in 2016. Howard Cotto claimed that homicides dropped by half in September, compared to the same month last year. September showed a twenty-five percent decrease from August. It would have been tough to surpass last year's ~104 homicides per 100,000 Salvadorans, but there does seem to have been a meaningful decrease in the number of homicides in El Salvador.

Both countries' homicide rates remain well above that of Guatemala, which finished 2015 with a rate under 30. Guatemala is on pace for its seventh consecutive year - that's right seventh - of falling homicide rates.

Homicide rates aren't everything, but it's generally better when they are heading down.
On January 21st, twenty Senate Democrats petitioned the Obama administration to extend protection to an estimated 1.5 million undocumented immigrants from Honduras, El Salvador, and Guatemala currently residing in the United States.
01.22.16 DHS Targeted Enforcement Letter
The letter calls for additional resources to process undocumented migrants more fairly, an end to recent raids and the use of funds to contract with the Corrections Corporation of America to detain immigrant families, and that those eligible to stay be allowed to remain in the US until it is safe for them to return to their home countries. In general, I don't really have a problem with any of the arguments made by the Senate Democrats.
However, I'm just wondering whether US policy should treat all three countries the same. We do and we don't depending upon the situation. The US pulled Peace Corps out of Honduras when its murder rate was over 90 per 100,000 and then out of El Salvador when its murder rate surpassed 100. We've limited volunteers to Guatemala but we've not pulled them out entirely.
Honduras' rate is now down below 60 (if we can believe the numbers). Guatemala's rate, on the other hand, has never been above 46 and now stands below 30 after several years of decreases. We can't reduce security to a country's murder rate but there's a significant difference among rates of approximately 30 (Guatemala), 60 (Honduras) and 100 (El Salvador).
Wouldn't we be ecstatic (too strong?) if Honduras and El Salvador reduced their murder rates to that of Guatemala within the next five years? Obviously a lot depends on how the murder rate is decreased and what comes of other crimes (e.g., extortion) but is that a reasonable goal? I'm not sure rates in Costa Rica, Nicaragua, and Panama are reasonable goals.
It feels like only yesterday that I thought it strange to lump El Salvador, Honduras, and Guatemala together when discussing homicides. See the murder rates for each country in 2012. Guatemala was at 34 per 100,000. El Salvador had carried out a gang truce that helped end the year at 42. At the same time, Honduras was in another league with a murder rate of 85. Honduras was double its nearest "competitor." 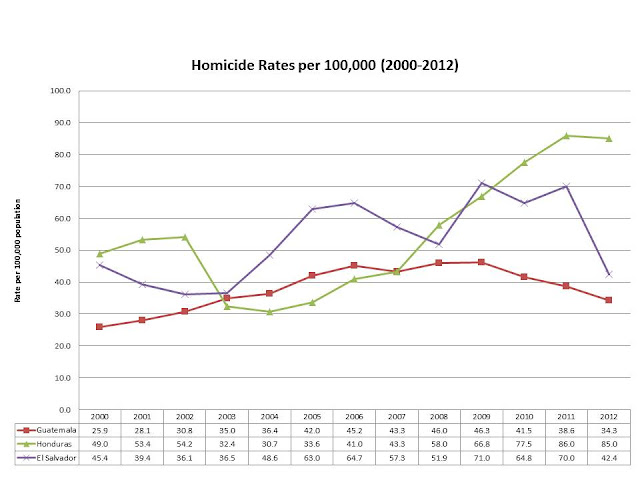 Three short years later, Guatemala is likely to finish the year with the northern triangle's "best" homicide rate of approximately 30.

Honduras and El Salvador, however, are switching places. Honduras is set to improve once again and should finish around 57. Unfortunately, El Salvador is going to finish the year with a rate of over 100,000.

While all three rates remain high, El Salvador's is in another league. Nothing seems to work. Hector Dada Hirezi asks Hacia adonde vamos?