In basic terms, as reported by BOFIT, per Rosstat, Russian seasonally-adjusted retail sales (by volume) fell more than 10% y/y in September, with non-food sales driving the figure deeper into the red. On the ‘upside’, services sales to households fell less than overall retail sales. This accelerates the rate of decline in household consumption expenditure - over 1H 2015, expenditure fell just under 9% y/y. Small silver lining to this cloud is that household debt continued to decline as Russian households withdrew from the credit markets and focused on increased savings (most likely precautionary savings).

Russian households are not the only ones that are saving. Overall external debt of the Russian Federation fell, again, in 3Q 2015, with preliminary data from the Central Bank of Russia figures putting total foreign debt at USD522bn as of end-September, down just over USD30bn compared to 2Q 2015. Per official estimates, ca 50 percent of the overall reduction q/q in external debt came from repayment of credit due, while the other 50 percent was down to devaluation of the ruble (ca 20 percent of Russian external debt was issued in Rubles).

Overall, 3Q 2015 saw some USD40 billion of external debt maturing, which means that over 1/4 of that debt was rolled over by the non-bank corporations. Per CBR estimates, ca 40% of the external debt owed by the Russian non-bank corporations relates to intragroup loans - basically debt owed across subsidiaries of the same percent entity. And over recent quarters, this type of debt has been increasing as the proportion of total debt, most likely reflecting two sub-trends:
1) increasing refinancing of inter-group loans using intra-group funds; and
2) increasing conversion of intra-group investments/equity into intragroup debt (and/or some conversion of FDI equity into intra-group debt).

Over the next 12 months (from the start of 4Q 2015), Russian foreign debt maturity profile covers USD87 billion in maturing obligations against country currency reserves of USD370 billion-odd. As noted by BOFIT, “A common rule-of-thumb suggests that a country’s reserves need to be sufficient to cover at least 100% of its short-term foreign debt to avoid liquidity problems.” Russia’s current cover is closer to 430%. And that is absent further ruble devaluations.

A chart via BOFIT: 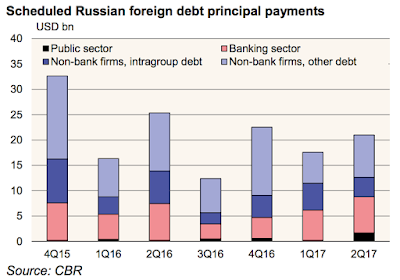