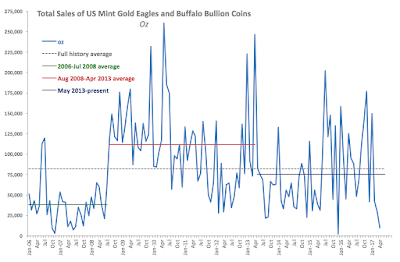 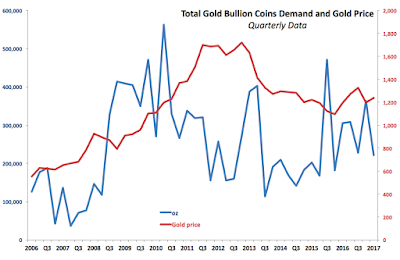 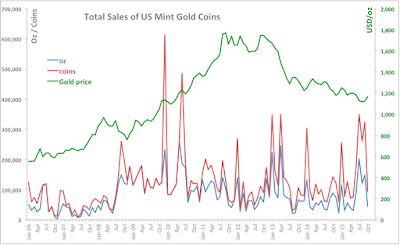 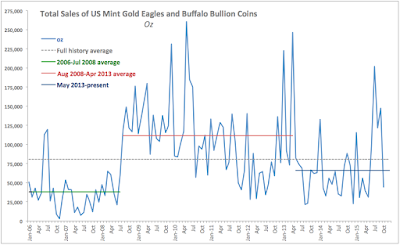 Not surprisingly, scale fall off in demand in October can be explained by the moderation in demand back to cyclical normal. As shown in the chart above, overall October sales figures came in below the period average for May 2013 through present. However, stripping out three main outlier peaks in demand, the average comes to 49,978 oz - closer to the October reading of 44,500 oz. In historical comparatives, demand for gold coins in October was 38th lowest by total weight and 56th lowest by coins counts for any month from January 2006 though present.
Another point worth making is seasonality. Over 2006-present horizon, October saw significant decline sin demand for gold coins in seven out of 10 years, with insignificant changes m/m recorded in one month. In other words, October tends to be a more bearish month of U.S. Mint coins sales.
Final point worth making is that correlation between demand for U.S. Mint coins (by total oz weight) continued to show negative 12 months correlation with gold price. In October, this correlation stood at -0.58, slightly less in absolute value than in September (-0.59) and below -0.72 correlation in October 2014. Overall, negative correlation remained in every month from April 2014 on, suggesting stable demand interest from investors on foot of gold price declines.