Greg Weeks continues his podcast adventures with Stephen Taylor in Colombia, What the Hell? He's on episode seven so be sure to check out the first six, including his interview with me about Nicaragua's upcoming election.

Returning to one of Patrick's points in his article that I linked to yesterday, I've already had a journalist with whom I was unfamiliar contact me after listening to the podcast. Twitter is a great way to make connections with journalists, academics, and other people simply interested in Latin America.

And if you are in the Scranton area, my Education for Justice office is sponsoring a discussion of the Colombian peace process on Wednesday. 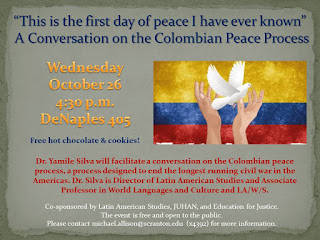 The event is free and open to the public.
Surprisingly, the Colombian people voted "no" on yesterday's referendum. Pre-referendum day seemed to indicate that the referendum in support of peace would pass by a comfortable margin. However, the Colombian state and FARC will now return to Havana to brainstorm what is next, a question I'm not sure any of them were seriously pondering as of Saturday.

In summer 2014, I traveled to a UNDP conference in Kenya on "The challenge of political transformation of armed and banned groups." I was there to discuss the previous experience of Latin American rebel group transitions to political parties. During the conference, I spoke with several individuals about the Colombian peace process in light of what had previously transpired in Central America.

I thought that the FARC could transition to a political party, although their political success would probably look more like the URNG (optimistic) or Contras (pessimistic) rather than the FMLN and FSLN. They had fifty years of organizing history, a relatively sizable number of combatants, a somewhat favorable institutional environment, and the possibility of building off comprehensive peace agreements. On the negative side, they had a history of violence against civilians, a limited number of noncombatants, and weak ties with civil society.

However, I was worried about the possibility (might have been a reality at the time) of putting the peace agreement to a vote. While I generally support consulting the population about elements of peace agreements, I kept thinking about the 1999 constitutional referendum in Guatemala. While the referendum was not an up/down vote on the peace accords, they did ask for public approval of a series of reforms that had been part of the ten years of negotiations. After a right-wing campaign of fear, less than twenty-percent of the population turned out to vote and a majority of those who did turn out to vote, voted no.

The Guatemalan accords might have accomplished more had they been less ambitious but been approved as part of the government-URNG negotiations and, therefore, not requiring citizen approval. Instead, the reforms failed and the URNG and PAN, who negotiated the peace agreement, were further weakened. The failure to pass the referendum and the time lost on campaigning, undermined the URNG's performance in that year's national elections. In some ways, the URNG (and the country) never recovered.
Kejal Vyas has a good story on Colombia’s Epic War Is Ending. Now Comes the Hard Part. I don't really like "Now Comes to the Hard Part." Maybe something like "It Won't Get Any Easier"? In the story, Vyas retells some concerns that FARC soldiers have about giving up their dreams of revolutionary success to participate in a capitalist system that shunned them, or one that they have never known.

For years now, the guerrillas of the so-called First Front of the FARC rebel group survived aerial bombings and firefights, measly rations and nightly battles with armies of red ants that crawled into their makeshift jungle beds.

But for them and many of the 6,800 FARC combatants scattered across Colombia’s hinterland, a new and, in some ways, more daunting phase lies just ahead: peace. “Our world is about to be turned upside down,” said Carolina Torres, 37, a guerrilla for 22 years who serves as a nurse in the First Front.

While the leadership can contemplate the establishment of a political party and their potential future as elected officials or civil society leaders, perhaps, the rank-and-file are left contemplating what to do with their bomb-making skills.

In El Salvador, some demobilized soldiers and guerrillas put their skills to work carrying out bank robberies. A few members of the Salvadoran National Resistance (RN) traveled to Guatemala to fight in that country's war but left rather quickly once they were unconvinced about the seriousness of the URNG soldiers.

For most, the transition is going to be difficult. Few jobs. Little education. Uncertain government assistance. I've heard that one-third to one-half of the demobilized Salvadoran and Guatemalan guerrillas probably live in the United States.
Jim Wyss and Glenn Garvin have a terrific overview of Latin American guerrilla movements finally coming to an end in the region for the Miami Herald. With the hopeful signing of a peace agreement between the Colombian government and the FARC, there will be no serious active guerrilla movement anywhere in the region. Yes, there will still be some active guerrillas in Paraguay (EPP), Colombia (ELN), and Peru (SL), but none have the military strength or popular support of their predecessors.

I did find this paragraph surprising.

Two other guerrilla movements came tantalizingly close to victory. In 1981, the Guatemalan army was down to a two-week supply of ammunition and near panic at its impending defeat. At about the same time, guerrillas in El Salvador were so confident that they launched what they billed as the “final offensive” on the nation’s capital. In both cases, last-minute military aid from the Reagan administration turned the tide.

I don't remember hearing that the Guatemalan military was that close to losing it all - two weeks of ammo? From some of my conversations with Guatemalan guerrillas, they argued that they received a tremendous influx of recruits in 1981 because of the military's brutal counterinsurgency program which had shifted its focus from the cities to the countryside at that time. They had too many volunteers. At the time, they didn't have enough weapons for everybody. Nor did they have the organizational capacity to integrate so many recruits at the same time. The Guatemalan guerrillas might have been at the height of their strength at this time but on the verge of emerging victorious, I am not so sure.

In El Salvador, the FMLN launched its final offensive on January 10, 1981, ten days before Ronald Reagan assumed the presidency in the US. President Jimmy Carter had suspended some aid to El Salvador following the murders of the four churchwomen in December 1980. However, he soon allowed much of that aid to go forward when he feared that he would "lose" another government to anti-American forces. According to Brian Bosch, the US released $5 million of non-military aid on January 14th and then an additional $5 million in lethal aid two days later. When US military supplies arrived on the 17th, the Salvadoran military responded:

With a combination of politically motivated nationalistic rhetoric and genuine pride, Colonel Garcia remarked to the press that the new U.S. equipment will "come in handy because it will help consolidate what we ourselves have accomplished."

From what I understand, the conditions for revolution were somewhat more ripe in 1979-1980. However, the FMLN wasn't ready. When the FMLN was ready, sort of, their moment of opportunity had passed.

Here is a little of what Alberto Martin and I wrote in Unity and Disunity in the FMLN.

One early event in which the FMLN’s lack of cohesion undermined its performance came during the failed January 1981 “final offensive.” According to McClintock (1998, 54), the FMLN disagreed on whether national conditions were appropriate for an attack, the RN did not participate, and the ERP did not share its weapons. The FPL insisted on a strategy of prolonged popular war while others supported a popular insurrection (Montgomery 1982, 131). The difficulties were compounded because the organizations still did not trust each other, which led them to overestimate, or lie about, how many fighters each would provide. According to ERP interviews, all five organizations participated, but the other four left forces in reserve. These internal frictions were not the only reason for the failed offensive, but they highlight the difficulties of reconciling the operations of distinct political-military organizations.

Gotta go prepare for a meeting.

Yesterday was a historic day for the Colombian people as its government signed a ceasefire with the Revolutionary Armed Forces of Colombia (FARC). “A Bilateral and Definitive Ceasefire, Cessation of Hostilities, and Laying Aside of Weapons” was the fifth and final element of the peace accords to end that country's several decades-long civil war, a war that had left more than 200,000 dead and millions displaced.

The Obama administration has not found much success in its policies towards Central America and Mexico. Trade; immigration; drugs trafficking; corruption; democratic backsliding; and cartel, gang, and organized crime violence. You name it. It's not all Obama's fault but it is hard to say that Mexico and Central America are demonstrably better off than they were eight years ago.

However, I imagine that if you had asked most Latin American specialists what they would have hoped would have been resolved during Obama's four/eight years in office, normalizing relations with Cuba and ending the Colombian civil war would have been one/two. Depending on what happens over the next few years, these two historic events are going to dominate Latin American history books. And while you can't entirely blame Obama for what has occurred in Mexico and Central America, you can't give him full credit for what has transpired in Cuba and Colombia.

I've tried to make this commitment in the past but I am going to try to pay greater attention to the FARC's transition to political party. I'm guessing that they will perform somewhere between the FMLN and URNG, most likely the latter. The FMLN was the region's strongest guerrilla group with quite an impressive political network. They immediately became El Salvador's second largest political party with 25% of the vote. The FMLN soon became the country's largest legislative party, even though the right in coalition outnumbered them, and then won the presidency in 2009.

The URNG, on the other hand, entered the political arena in a much weaker state than the FMLN. They had few combatants and much weaker relations with civil society. In my opinion, the drawn out peace process in Guatemala weakened the URNG. In an alliance with other leftist groups in 1999, however, the URNG/ANN did worse than expected which was a problem of expectations rather than performance. With Alvaro Colom as its candidate, the URNG/ANN captured 12% of the vote and became the country third largest political party, well behind the top two. The URNG is now the second longest running political party in Guatemala, although that is little consolation to its followers. You can check out my academic writing on the FMLN and URNG here. Let me know if you'd like a copy of anything.

So there you have the best and worst case scenarios for the FARC as it begins its transition to political party.