New research from Germany's ifo Institute and Immowelt looked at the effects of the new rent caps (rent controls) in Berlin. The findings are consistent with what we observe in other major cities with rent controls:

"As a result [of the rent controls introduction], the divide in the Berlin real estate market is widening: new buildings, which are often found in preferred locations, are becoming increasingly expensive while prices for existing housing are developing less strongly. This  weakens the incentives to develop these buildings. ... Such a development cannot be good for an urban society and contradicts the very purpose of the law."

Ifo's preferred solution to reduce economic inefficiency of rent controls: "Instead of interfering with the ownership rights of mostly private landlords and hindering investment in housing, policy should focus on creating subsidized housing where needed.”

Summary:
Thoughts on why this should work any differently for Ireland are welcomed in the Irish mainstream-populist media.
A new paper, "Sand Castles Before the Tide? Affordable Housing in Expensive Cities" by Gabriel Metcalf in the Journal of Economic Perspectives (Volume 32, Number 1—Winter 2018—Pages 59–80, https://pubs.aeaweb.org/doi/pdfplus/10.1257/jep.32.1.59) looks at evolution of house prices in the major urban areas of the U.S. where "the demand for housing is growing at a much faster rate than the supply. These so-called “superstars” include New York City, Boston, Washington, DC, San Francisco, Los Angeles, Seattle, and Denver (Gyourko, Mayer, and Sinai 2013)."

These cities have "a seemingly permanent crisis of affordable housing," despite the fact that "...policymakers expend great amounts of energy trying to bring down housing costs with subsidies for affordable housing and sometimes with rent control. But these efforts are undermined by planning decisions that make housing for most people vastly more expensive than it has to be by restricting the supply of new units even in the face of growing demand."

The author provides an interesting data summary for these cities. Table 2 in the paper reports the proportion of housing units that are price-controlled or subsidised: 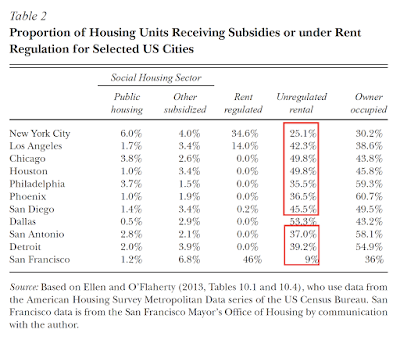 Of all cities areas covered, only one - Dallas - has unregulated rental market share of >50% of the total supply. Put differently, in all but one cities, subsidised and/or rent-controlled housing accounts for more than 50% of the total rental market. Only four out of 11 cities have owner-occupied housing share of the overall property market in excess of 50%.

The rest of the paper proceeds to tell us all the possible reasons as to why this capture of the property markets by price fixing and state ownership is just not enough.  Some of these reasons and arguments are not bad. Some are simply the dogmatic rehashing of the traditional Government-will-solve-everything mantra. That said, the section on the effects of poor regulation (not in quantity, but quality) of the housing markets is spot on and worth reading.

The author first tackles the issue of zoning regulations, arguing (correctly, imo) that zoning regulations both restrict supply and distort types of supply away from what is needed in addressing affordable housing shortages. The section is very brief.

The same applies to the housing approval process, that, according to the author, can result in "more uncertainty and greater risk" which result "a higher cost of capital. Longer approval processes translate into higher carrying costs for the land... Perhaps the greatest negative impact of an uncertain and hyperpoliticized entitlement process is that it functions as a barrier to entry for developers and investors into a market. The net effect is to reduce competition among developers."

"The fourth type of local regulation on housing development is financial: fees and exactions... if the rules are inherently unpredictable and changeable, it is nearly impossible to bid rationally on land, which inevitably drives up the cost of capital, and results in inefficient outcomes. ...the market price for housing has to remain high enough to cover the cost of the fees and exactions, so these function as a price floor that keeps housing more expensive than it otherwise would be."

In summary, and I find myself in agreement with author on this, "For the country as a whole, the restrictive housing policies of the cities in expensive metro areas leads to the segregation of the wealthy into zoned enclave communities; a reduced ability of lower-income people to move to areas of higher opportunity; a diversion of enormous wealth into rent-seeking behavior by landowners; and a decrease in economic productivity for the country as a whole, because labor is not able to be allocated to the most productive economic clusters".

The article provides a good summary and some good insights into potential solutions to the problems summarised above and to the phenomenon of the failure in collective action that occurs between city-level Government policies and those of the wider (commutable) metropolitan areas.

One thing that is, however, clear that housing affordability in major cities has not been meaningfully supported by the already extensive regulatory, price control and subsidy-providing systems. The idea that rent controls can offset bad regulatory and permissioning, as well as financial charging policies is simply not supported by the evidence provided for the largest and growing cities in the U.S.

Rent controls are all the rage in Dublin kommentariate classes. But here is some evidence on their effectiveness in that centre of ‘egalitarianism’/‘tech elitism’ of San Fran: 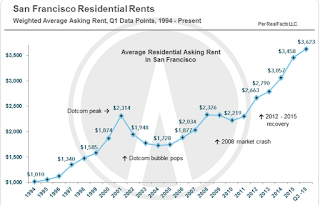 You can see details https://www.sftu.org/rentcontrol/

Controls in San Fran have been a long running feature of the market, so one could have expected for these to at least induce lower volatility in rents. As the chart above shows, that is not the case and volatility - poor-cyclical - remains in place. As per levels of rents, why, San Fran rents are just plain insane.