S&P on Irish banks outlook for 2019, with my comments included: https://www.spglobal.com/marketintelligence/en/news-insights/trending/wU14cpHw2NfouDi3MnHVQw2.

S&P on Irish banks outlook for 2019, with my comments included: https://www.spglobal.com/marketintelligence/en/news-insights/trending/wU14cpHw2NfouDi3MnHVQw2.

An interesting set of charts plotting trends in U.S. household credit arrears over time, courtesy of the @SoberLook 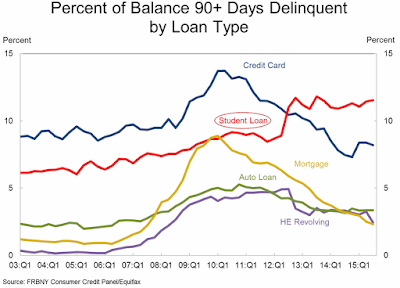 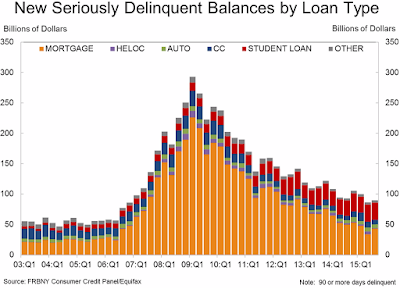 Three things stand out in the above.
Per first chart, credit cards debt is the only form of credit that saw arrears drop below pre-crisis levels. It also happens to be the form of debt that is easiest to resolve - largely unsecured and easily written down. Mortgages debt arrears - while declining significantly from crisis peak - still remain at levels above pre-crisis averages. Ditto for all other forms of household debt.
Also per first chart, improving labour markets conditions are doing zilch for student loans arrears. These remain on an upward trend and close to historical highs.

Thirdly, from the second chart, new volumes household credit in arrears in 3Q 2015 are broadly consistent with the situation in the same quarter in 2014, with new arrears falling to 4Q 2007 levels, but still running at levels well above 2003-2006 levels.

This, in an economy characterised by more robust labour markets than those of Europe and by personal insolvency regimes and debt resolution systems more benign than those in Europe. In simple terms: deleveraging out of bad debt is a painful, long-term process. Good luck to anyone thinking that raising rates will do anything but delay it even longer and make the pain of it even greater.