Much has been said about inequality in Ireland. On TV off TV and elsewhere. Much of it is, sadly put, locked out factoids.

You see, inequality is a tough thing to measure. So we have loads of various metrics to go by and none are ‘perfect’.

Here is a slightly more comprehensive view via @Jim_Edwards 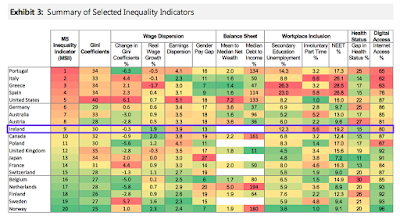 What the above shows is that across comparable economies, Ireland is mid-range in terms of inequality. Right next to Canada and Austria - two societies that few would consider to be viciously unfair to their residents. Not that there is no room for improvement, mind.

That said, the chart does miss some relevant data for Ireland - the wealth distribution. Which we are, arguably, not a shining example of.

I am not going to repeat my arguments about the relationship between tax system and wealth inequality (you can read them here: http://trueeconomics.blogspot.ie/2014/08/2182014-thomas-piketty-powerful.html), but it is worth noting that we rank well in terms of real wages growth and gender pay gap, as well as health status. We rank average in terms of all other metrics, save for involuntary part-time employment, which - by the way - is improving. I am not too keen on including arbitrary metric of ‘Digital Access’ in the scoring, however.

As an aside, the above table also fails to measure underemployment (you can read on this here: http://trueeconomics.blogspot.ie/2015/11/241115-over-skilled-under-employed.html).