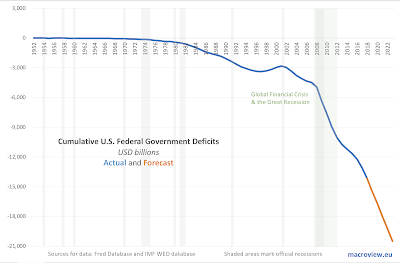 U.S Treasury latest figures (through May 2017) for Federal Government’s fiscal (I’m)balance are an interesting read this year for a number of reasons. One of these is the promise of fiscal responsibility and cutting of public spending and deficits made by President Trump and the Republicans during last year’s campaigns. The promise that remains, unfortunately, unfulfilled.

Given that 4 out of the 8 months of FY 2017 were under the Obama Presidency tenure, the above comparatives are incomplete. So consider the four months starting February and ending May. Over that period of 2017, Federal deficit stood at $274.274 billion, up 11.17% or $27.569 billion on February-May for FY 2016. In this period, in 2017, Trump Administration managed to spend $51.9 billion more than his predecessor’s presidency. 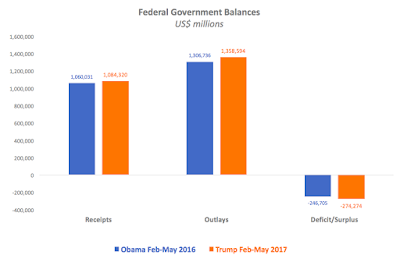 You can see more detailed breakdown of expenditures and receipts here: https://www.fiscal.treasury.gov/fsreports/rpt/mthTreasStmt/mts0517.pdf but the bottom line is simple: so far, four months into his presidency, Mr. Trump is yet to start showing any signs of fiscal discipline. Which raises the question about his cheerleaders in Congress: having spent Obama White House years banging on about the need for responsible financial management in Washington, the Republicans are hardly in a rush to start balancing the books now that their party is in control of both legislative and, with some hefty caveats, the executive branches.

Barack Obama came to public attention through the power of his oratory, and then won the presidency on the back of its soaring, uplifting, optimistic cadences.  He called it into action again, after eight years as the nation's preacher in chief where his ability to persuade a nation and articulate its public and hidden feelings has often been stretched to the limit but rarely found wanting.  His speech to the Democratic Convention wasn't just about supporting the woman he wants to be his successor, or damning, with his customary crisp, light yet lethally wielded authority, her opponent.  It was also about ensuring the longevity of his own legacy.  It was about whether the presidency stays in the hands of someone with intellectual rigour, passion and nuance, or whether it passes to the vulgarian instincts of a self-regarding demagogue.

It was a tremendous speech, a reminder of what it's like to be governed in poetry.  And in defending the character of Hillary Clinton, a woman who has been active in front-line politics for over thirty years, he also called in support the impressive verbal artillery of one of his illustrious Republican predecessors.  Teddy Roosevelt was the man who first referred to the presidency as the "bully pulpit", and he was no mean user of it.  He had no time for the critics who sniped from the sidelines, preferring the endeavours of the person who clambered into the arena to do something, and while yes, this embraces both good and bad, it is nonetheless an invocation to do more than simply carp.  The passage that President Obama referred to is here:

It is not the critic who counts; not the man who points out how the strong man stumbles, or where the doer of deeds could have done them better. The credit belongs to the man who is actually in the arena, whose face is marred by dust and sweat and blood; who strives valiantly; who errs, who comes short again and again, because there is no effort without error and shortcoming; but who does actually strive to do the deeds; who knows great enthusiasms, the great devotions; who spends himself in a worthy cause; who at the best knows in the end the triumph of high achievement, and who at the worst, if he fails, at least fails while daring greatly, so that his place shall never be with those cold and timid souls who neither know victory nor defeat.

Roosevelt was addressing the issue of "Citizenship in a Republic", speaking at the time to an audience at the Sorbonne in Paris.  As our own democracies and republics face ever greater threats, and as our political class comes under more cynicism and pressure the time is certainly here for more people to actually get into the arena, for there they will not just act for the ideals they hold but perhaps also understand that there is no easy path to any political goal, no matter how virtuous.  That compromise and shortcoming and erring is part of the process.

Obama called many ideas and people into action in his speech, including the very founding fathers who declared their independence at Philadelphia in 1776.  His speech - worth watching in its entirety - was a reminder not just of how far the republic has come, but also of how easily it might fall back into the mendacious hands of an arrogant authoritarian.  It was a terrific call to arms.

"Britons now know how Americans feel. The most politically polarizing U.S. President in modern history decided on Friday to inject himself into the British debate over the June referendum to leave the European Union, as ever leading with a dubious political threat."

Wow. Really?  The most politically polarising president of modern times?  Leaving Nixon in the shade?  Clinton?  Johnson?  That's some claim.  But it is very much the right-wing mantra.  Take a UK observer, Tim Montgomerie.  Normally a man of moderation and common sense, Montgomerie lets go of his moorings when he writes about Obama.  He started his Spectator attack piece by comparing Obama negatively against Donald Trump, suggesting Trump was a bit of a shrinking violet when stood against Obama's over-weening self-confidence.  "King Barack" Montgomerie called him, presumably to distinguish him from non-imperial presidents like Nixon, Johnson, Reagan et al.

The trans-Atlantic right's hatred of Obama merits serious academic study at some point (and Alex Massie pens a vigorous current assessment here), but for the moment it is worth just noting that his main sin is to be an articulate spokesman for liberalism, and that the facts on the ground point as much, if not more, to a laager-retreating Republican Party than a dementedly dividing president when it comes to polarising American politics.  Obama, after all, continues to enjoy buoyant and improving ratings as this election year goes on.  Every time a right-wing spokesman demonizes the president they manage to do it in such a way as to invite serious questions about their mental stability.  Which explains a lot about the current rosta of Republican leaders and presidential contenders.

Embed from Getty Images
Well it's a thought anyway.  If conservative Justice Antonin Scalia's death has plunged America into a potential constitutional crisis and more crie de coeurs about whether its system of government is fit for purpose, there is still some mileage to be made by beleaguered Democrats.

In short, Scalia was a conservative Justice - rigorously conservative actually - whose replacement by anyone even marginally to his left could initiate a change in the political direction of the Court.  And make no mistake, political direction is what it is all about.  This court has long been political, whether it was as an activist liberal court under Earl Warren, or the Republican leaning Court that appointed its political fellow traveller, George W Bush, as president in Bush v Gore in 2000.

So its opinions may be beautifully worded and legally argued to the nth degree, but they have a huge political impact and the Justices all know it.

So does President Obama, the appointee to date of two Justices - each of whom replaced a retiring liberal.  In his reflections on what makes a good Justice, one of Obama's least legal but most impressive citations was that of empathy. As Slate writer Dahlia Lithwick notes in a fascinating article, Obama understood that justice is not some remote, detached concept but actually affects people's lives.  The former law professor commented that:

Not something, as Lithwick points out, that could ever have been considered the abiding value of the late Justice Scalia.

The battle to replace Scalia is potentially undermining for America's system of government, and showcases the level of polarisation that country's politics are now delivering.  Republican Senate Majority Leader Mitch McConnell is quite clear that he doesn't see any need to appoint a new Justice until America has a new president.  He is way out of line constitutionally, but well in line in a party that is so rigorously partisan that it has no memory of what it was once like to legislate and govern in the national interest.  McConnell and his allies on the Hill make Richard Nixon look like a model of bi-partisan leadership.

But could the Republicans' determination to co-opt the Supreme Court into their political battles backfire?  Suppose - no mean supposition this - that the Republicans do not win back the white House and it goes to either Clinton or, more dangerously for them, Sanders?  Suppose the larger than usual number of voters who always tend to come out for presidential elections take against the Republicans enough to push the Senate back into Democratic hands?  It's not unusual for it to change hands in the presidential election years after all.

What price then Senator McConnell's bullish strategy?  A Democratic president, and a recently out of work law professor who has just served the nation as president.  Could Obama be the retaliatory nominee for the Supreme Court under a President Clinton or Sanders?  After all, former president William Howard Taft went on to serve with distinction as a Justice.  And Clinton, no matter how spontaneously, embraced the idea when a voter in Iowa suggested it.

It would be poetic justice indeed if president Obama became Justice Obama because the Republicans chose to delay appointing a Supreme Court replacement for a year after a vacancy arose.  Oh please make it happen!