In my recent column for Slon.ru (see: http://trueeconomics.blogspot.ie/2015/12/151215-russian-outlook-for-2016-slon.html) I quipped that in the case of the Russian economy, forecasts for 2016 growth rates might just as well be taken from the fortune tellers, as there are too many moving factors driving the economy, all of which are virtually impossible to forecast.

Now, h/t to @JoMichell, we have a picture of 'predictability' of one key driver of the Russian economy - oil prices. Please, keep in mind: these are Brent prices (Urals grade predictability is even lower, as Urals-Brent spread is subject to further uncertainty, including geopolitical risks and substitution risks, as discussed in my Slon.ru column).

So here is a chart showing IMF forecasts for Brent prices issued back in June 2015: 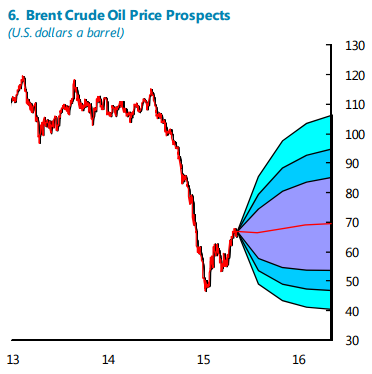 Note that in the above, least probable downside scenario is for oil above USD40 per barrel through 2015. Alas, the least probable forecast is not exactly the lower bound for reality: 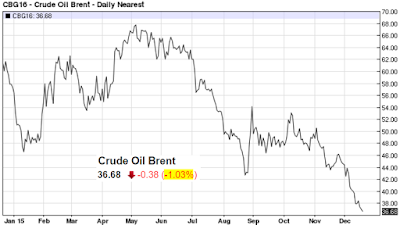 So here we have it: less than 6 months forecast out, and the least probable worst case scenario has been breached already. Good luck pinning Russian GDP forecasts down...