“Forecasters see the Russian economy contracting slightly in 2016. Recent economic forecasts, with the exception of the brighter projection of Russia’s economy ministry, see GDP contracting about a half per cent. A couple of forecasts expect a drop of about 1 %. The average price of oil next year is assumed to average $50–55 a barrel.

Most forecasts also see imports declining a bit further. Almost all forecasts see private consumption shrinking next year, most by about 1 %.

The CBR’s forecast update this month, however, reduced its earlier projection and now expects private consumption to contract by nearly 4 %. The consumption projections reflect the anticipation that household income growth will not keep up with inflation, especially as increases of public sector wages and pensions have been set very low due to the frail condition of government budgets. 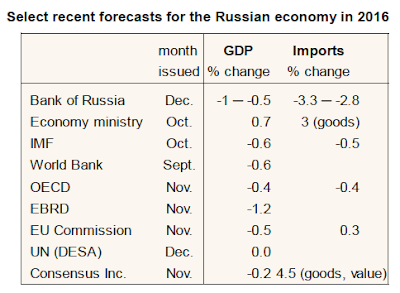 My view on Russian economic growth prospects for 2016 were reflected in my column for Slon.ru: http://trueeconomics.blogspot.ie/2015/12/151215-russian-outlook-for-2016-slon.html.