And yes, leverage risks in the private sector have increased as the result of these figures. At the end of 1Q 2020:
U.S. Junk Bonds markets have been a canary in the proverbial mine of the global economy since 2014, when we first felt some tremors in the markets. But so far, default rates for the junk bonds remained relatively subdued, albeit rising.

However, as recent Fitch forecasts suggest, things are about to get 1999-2000 styled. Fitch latest projection (mid-December) for U.S. Junk Bonds default rate for 2016 is at 4.5%, with energy sector at 11%. Now, for sectoral comparatives, here are the historical average default rates for the periods outside official recessions: 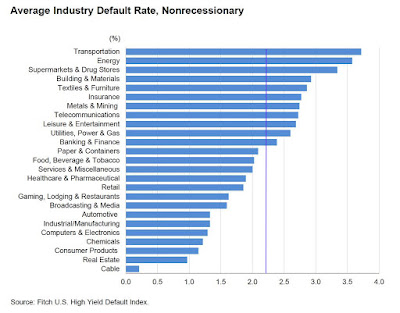 The average in the historical series ex-recessions is close to 2.2%, which would make 2016 forecast for 4.5%... err... touchy, to say the least. It is also worth noting that in three pre-Global Financial Crisis recessions, build up in default rates was gradual, over two-four years. We are now two years into such a build up.

Obviously, this does not look like a good time to go into heavily leveraged assets... unless you've never been through a credit cycle meat grinder before...