According to Markit, “The global manufacturing sector ended 2015 on a disappointing note, with the rates of expansion in production and new orders both slowing in December. At 50.9, down from 51.2 in November, the J.P.Morgan Global Manufacturing PMI …fell to a three-month low. The average PMI reading over 2015 as a whole was below those registered in both of the prior two years.”

Much of the deterioration is, apparently down to emerging markets weaknesses. “The end of 2015 saw the downturn in emerging market manufacturing continue, with PMI indices for China,
India, Brazil, Russia, Indonesia and Malaysia all in sub-50.0 contraction territory. Although the expansion in developed nations continued, growth slowed (on average) to an eight-month low.”

You can see the ‘weighting’ effect in the chart here based on quarterly data: 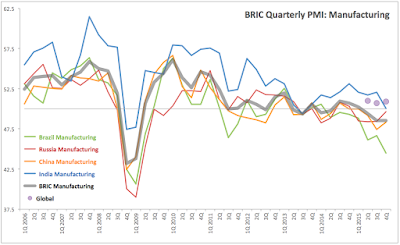 And a summary table for Global Manufacturing PMI from Markit here: 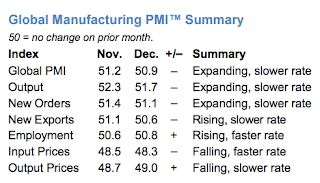