IMF brainiacs have been struggling over time to develop some sort of a coherent framework for managing the fallouts from systemic sovereign debt crises. So far, the golden rule has ben elusive for them. However, following the Cypriot and Greek experiences with private sector bail-ins and realising the direct connection between these experiences and the cases of other peripheral Euro area states, most notably Ireland and Portugal, the IMF have been coming around to the idea that while all countries are ‘equal’, some are ‘more equal’ than others. In other words, that in the world where might is right, there are two tiers of countries: those that get whacked and those that get properly rescued.

It says what it does: “The paper presents a …model to understand how international financial institutions (IFIs) [read IMF and European ESM/EFSM/EFSF and so on] should deal with the sovereign debt crisis of a systemic country, in which case private creditors' bail-ins entail international spillovers.” Notice the emphasis on ‘systemic’ country. In other words, ‘not the ordinary fry’ like smaller ‘peripherals’.

“Besides lending to the country up to its borrowing capacity, IFIs face the difficult issue of how to address the remaining financing needs with a combination of fiscal consolidation, bail-ins and possibly official transfers. To maximize social welfare, IFIs should differentiate the policy mix depending on the strength of spillovers. In particular, stronger spillovers call for smaller bail-ins and greater fiscal consolidation.” Which simply says: more systemic is a country, less risk of bail-ins, so if you are a French or a German depositor or lender, you are lucky. If you are a Belgian or Irish depositor or lender, tough sh*t, mate.

“Furthermore, to avoid requiring excessive fiscal consolidation, IFIs should provide highly systemic countries with official transfers. To limit the moral hazard consequences of transfers, it is important that IFIs operate under a predetermined crisis resolution framework that ensures commitment.” Oh, what this means is that systemic countries get bailed out via official sector (IMF et al) burden sharing. Small countries - get screwed by not having access to such largess.

Here’s more beef from the paper:

“…consider the optimal policy mix to address the financing needs of a non-systemic country, for which bail-ins do not entail international spillovers. In this case, besides lending to the country up to its borrowing capacity, IFIs should use only fiscal consolidation and bail-ins.” In other words: small country gets only funds sufficient to cover its standing allowance under the normal rules and not a penny more. Rest of ‘rescue’ funds should be squeezed out of the country economy. “Official transfers should …be avoided because they do generate severe moral hazard since they are not priced into countries’ ex-ante borrowing rates.” Which simply says: look, bailing out through official burden sharing will not increase fiscal pain for smaller countries as yields on government debt are not going to rise high enough.

So, please, whack these small countries harder, to teach them a lesson and who cares about their economies and people. Lessons matter, you peasants.

Now onto systemic countries case: “Dealing with the sovereign debt crisis of a systemic country, …a first implication is that bail-ins should be used to a lesser extent since they are more socially harmful due to the associated spillovers. If IFIs are prevented from providing transfers, any reduction in bail-ins would need to be offset entirely through an increase in fiscal consolidation. In this case, systemic countries might be required to endure an excessive amount of consolidation to spare the international community from the systemic consequences of bail-ins. When dealing with systemic countries, it may thus become efficient to compensate the reduction in bail-ins not only through greater fiscal consolidation, but also with official transfers.” So in simple terms: if you are a big country, you will be treated entirely differently from a small country. Never mind that moral hazard thingy - systemic countries get official sector burden sharing, lending over allowed capacity and less bail-ins pressure.

Of course, the IMF Working Paper is not reflective of the Fund official position, as disclaimers go. So this paper is nothing more than a ‘discussion’ of what should take place, rather than what will take place. But, of course, we all know one simple fact: in the world of IMF, some countries are ‘more equal’ than others. 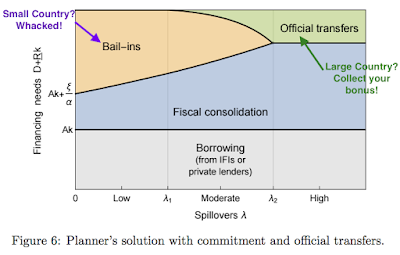