An intersting (and occasionally covered on this blog) chart via FactSet on earnings and revenue growth for S&P500 constituents based on their exposures to international markets: 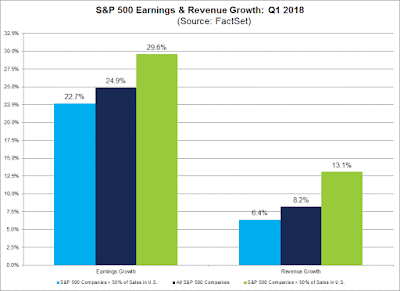 As the above clearly shows, globally diversified (by source of activity) companies have stronger growth in earnings and aggregate earnings. Not surprising, in general, but given the relative strength of the U.S. growth, compared to other regions' dynamics, this shows the value of income diversification.

Forget Bitcoin (for a second) and look at the real markets.

Per Goldman Sachs research, current markets valuation for bonds and stocks are out of touch with historical bubbles reality: https://www.bloomberg.com/news/articles/2017-11-29/goldman-warns-highest-valuations-since-1900-mean-pain-is-coming. As it says on the tin,

“A portfolio of 60 percent S&P 500 Index stocks and 40 percent 10-year U.S. Treasuries generated a 7.1 percent inflation-adjusted return since 1985, Goldman calculated -- compared with 4.8 percent over the last century. The tech-bubble implosion and global financial crisis were the two taints to the record.”

Now, Check point 2: The markets are already in a complacency stage: “The exceptionally low volatility found in the stock market -- with the VIX index near the record low it reached in September -- could continue. History has featured periods when low volatility lasted more than three years. The current one began in mid-2016.”

Next, Check point 3: Valuations are not everything. In other words, levels are not the sole driver of blowouts. In fact, per Goldman, valuations explain “less than half the [markets] variation since 1900.” But, when blowouts do happen, involving 60/40 portfolios “over the past century [these] amounted to 26 percent in real terms on average, lasting 19 months. It took two years to get back to previous peaks, on average.” And the problem with this is that there might be no firepower to fight the next blowout. “Central banks “might not be able or willing to buffer growth or inflation shocks.” They also face fewer options to ease monetary policy given low rates and big balance sheets.”

So to sum the above up: levels of market valuations are screaming bubbles in both bonds and stocks; investors are fully bought into the hype of rising valuations; and there might be a shortage of dry powder in store at the Central Banks.

Goldman’s team, predictably, thinks the likeliest unwinding scenario from the above will involve, you’ve guessed it… a soft landing.

Observe the following simple fact: the rate of the ‘balanced’ portfolio appreciation in the current cycle is sharper than in the 2002-2007 cycle. And it is sharper, in cumulative terms (both nominal and real), than any other cycle in modern (post 1970s - end of Bretton Woods and stagflationary environments) period.

So the Check point 5 adds strong bubble dynamics to bubble signals of levels of out-of-touch valuations, investors complacency and risks to the Central Banks’ commitment.

This is, put frankly, ugly. Because all four components of a major market blowout are now in place. So while the froth might still run for some weeks, months, quarters, … and may be even a year or two, the longer it runs, the worse the fallout will be. And the fallout is coming.

A note of mine covering 2015 Gold market and the continued role of gold bullion & coins as risk diversifiers in current environment is now available on GoldCore page here: http://www.goldcore.com/us/gold-blog/gold-bullion-retains-key-role-of-a-major-diversifier-dr-gurdgiev/. 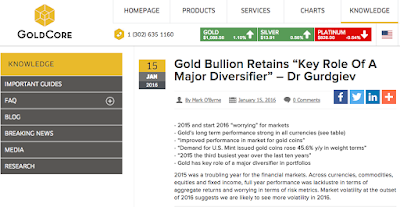